Biofuels for a Greener Economy? Insights from Jatropha Production in Northeastern Ethiopia
Next Article in Special Issue

Human activities continuously change land coverage and the atmosphere; they directly and indirectly influence the global energy balance, and cause climate change [1]. Humans are slowly coming to understand that the issue of climate change must be considered with an eye to establishing a consensus around sustainable development. This awareness arises mainly from disasters that are caused by extreme climate events worldwide. The issue forces people to reflect on the relationship between social development and the environment. The IPCC has also noted that island states are particularly vulnerable to global warming [2]. Bueno et al. [3] found that various investigations of the effect of climate change on small Caribbean islands emphasize the loss of tourism and damage to infrastructure, which will reduce the economies of these islands by 10%.
The 2011 edition of National Footprint Accounts (NFA), published by the Global Footprint Network (GFN) suggests that humankind consumed ecological resources and services that are equivalent to 1.5 planets in 2008; the corresponding value in 1960 was only 0.7 planets. While North Americans had an ecological footprint of 8.7 global hectares (gha) per person, Africans had a footprint of 1.4 gha per person. Given a global average biocapacity of only 1.8 gha per person, human beings are over-exploiting the ecological resources of the planet.
In the latest NFA of the GFN [4], the six major categories of footprint are cropland, grazing land, fishing grounds, forest land, carbon uptake land and built-up land. The size of an ecological footprint is positively related to environmental impact but negatively related to the area of available bioproductive land per person; a larger footprint corresponds to less bioproductive land per person. Table 1 presents global ecological footprint data before 2009 [5,6,7,8].

The ecological footprint assumes that human settlements and infrastructure occupy areas of high agricultural yield. Some settled areas are completely covered and others may still be bioproductive, such as those that include gardens or parks. The ecological footprint of such areas is assumed to be a function of earlier agricultural productivity and the total area of built-up land equals the replaced area of cropland.
The built-up land footprint is calculated from the area of the land that is covered by human infrastructure, which includes transportation, housing, industrial structures and reservoirs for hydroelectric power generation. In 2007, the area of all built-up land around the world was 169.59 million hectares [32]. The 2010 edition of the National Footprint Accounts assumes that built-up land occupies what would previously have been cropland. This assumption is based on the observation that human settlements are typically located in fertile areas with the potential for supporting high-yielding cropland [33], according to the following Equation (2).
Built-up land ecological footprint (gha) = built-up land area (ha) × built-up land equivalence factor (gha/ha)

Carbon uptake land is the largest contributor to humanity’s current total ecological footprint and increased more than tenfold from 1961–2007 [32]. The calculation of a carbon footprint involves the increase in demand for bioproductive areas, such as forest, that absorb CO2 that is emitted by, for example, fuel combustion as a result of human economic activity. In calculating the area of land for sequestration, a quarter of CO2 emissions, which are sequestered by the ocean, should be subtracted out [31]. The yield factor for carbon uptake land is assumed to be the same as that for forest land [32]. The annual rate of carbon uptake per hectare of forest land at world average yield (carbon uptake capacity) is 1.8 tons per hectare [23]. The relevant equation is as shown in Formula (3).
Carbon footprint (gha) = CO2 emissions (tons) × (1 − 1/4)/yield factor (carbon uptake capacity) (tons/ha) × carbon uptake land equivalence factor (gha/ha)

3.1. Calculation of Ecological Footprint of Taiwan in 2011

The GFN method for calculating the ecological footprint in terms of food and wood and the data from FAO [36,37,38] and FAOSTAT [39] were used herein to estimate the “global mean productivity” in 2010, with the goal of determining the yield factors for food and wood, as shown in Table 3. Table 4 presents the 2011 ecological footprint in terms of cropland, grazing land, fishing grounds and forest land.

Table 4. Ecological footprint in terms of cropland, grazing land, fishing grounds and forest land areas in 2011 (before application of the equivalence factor) (All numbers are rounded). 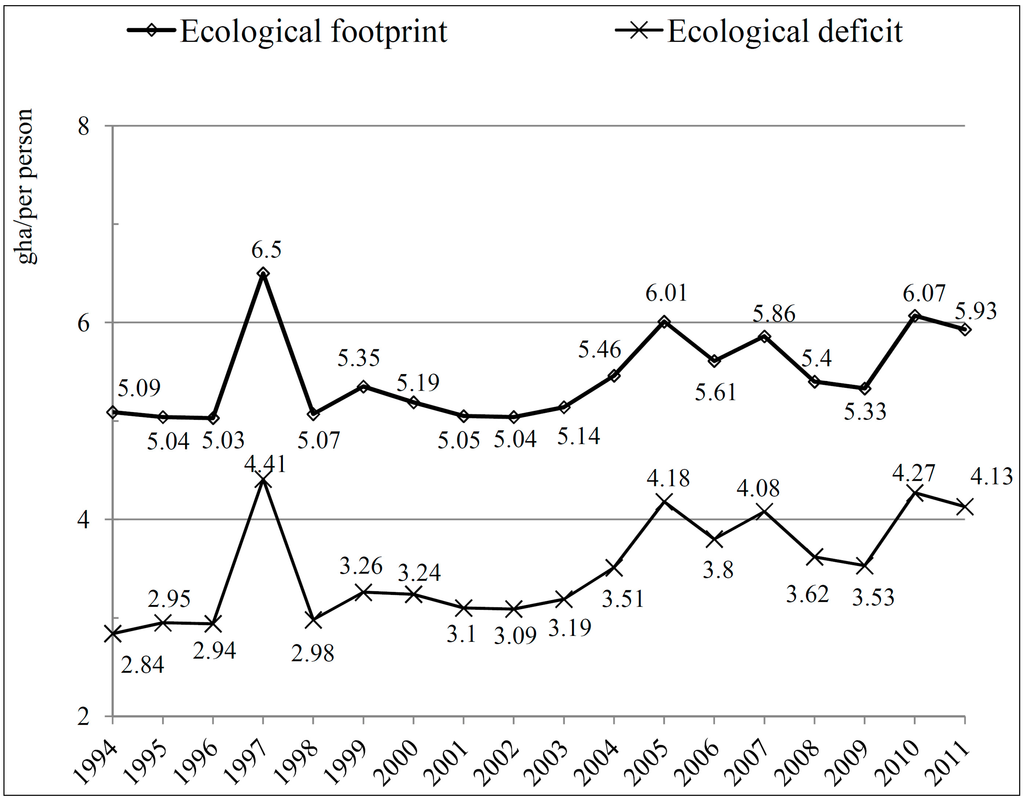 Figure 1 reveals two peaks in the ecological footprint in 1997 and 2010. Wang et al. [12] found that the consumption of meat, vegetables and fruit, and wood was higher in those years than in the other years. The area of the land that was associated with meat consumption fell from 1.014 ha in 1997 to 0.933 ha in 2003; the consumption of vegetables and fruit declined from 138.8 kg in 1997 to 125.3 kg in 2003 owing to extreme climate events and natural disasters, and the consumption of wood, especially firewood, mill-wood and bamboo, fell from 42,942 thousand tons in 1997 to 26,818 thousand tons in 2003.
In 2010, a new yield factor of global bioproductivity was adopted for calculating the ecological footprint of Taiwan. The COA [11] used the 2004 yield factor of global bioproductivity before 2009. The use of a different yield factor thereafter is responsible for the large difference between the results for 2004 and 2010. Global fishing production fell from 1,325,000 thousand tons in 2004 to 148,477 thousand tons in 2010, causing the yield factor to fall from 697.37 kg/ha in 2004 to 78.15 kg/ha in 2010. Accordingly, the fishing grounds footprint drastically increased and this increase was responsible for the fact that the ecological footprint in 2010 exceeded that in 2009. This result also explains why the fishing resources on continental shelves globally were depleted in 2010.
Table 9 shows the ecological footprint and ecological deficit using CO2 emissions (CDE) to calculate carbon footprints after 2004. Compared to the results from Figure 1 (using TPES), Figure 2 presents a huge difference between these two calculation methods. To better reflect the global warming phenomena, we suggest CO2 emissions be adopted to calculate carbon footprints, rather than TPES. Furthermore, this study only calculated CO2 emissions per capita and excluded the other five greenhouse gases (GHGs) required by the Kyoto Protocol, including CH4, N2O, HFCs, PFCs, and SF6 [44]. Future research should include the six GHGs to calculate the GHG footprints. 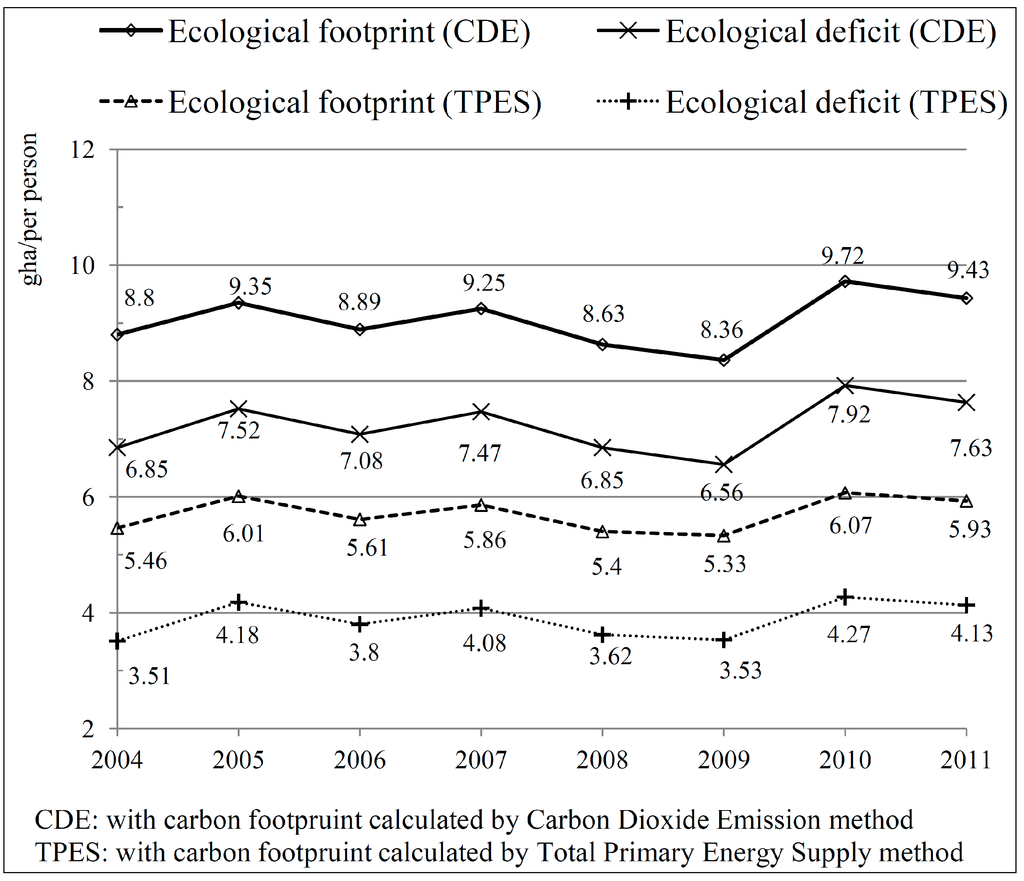 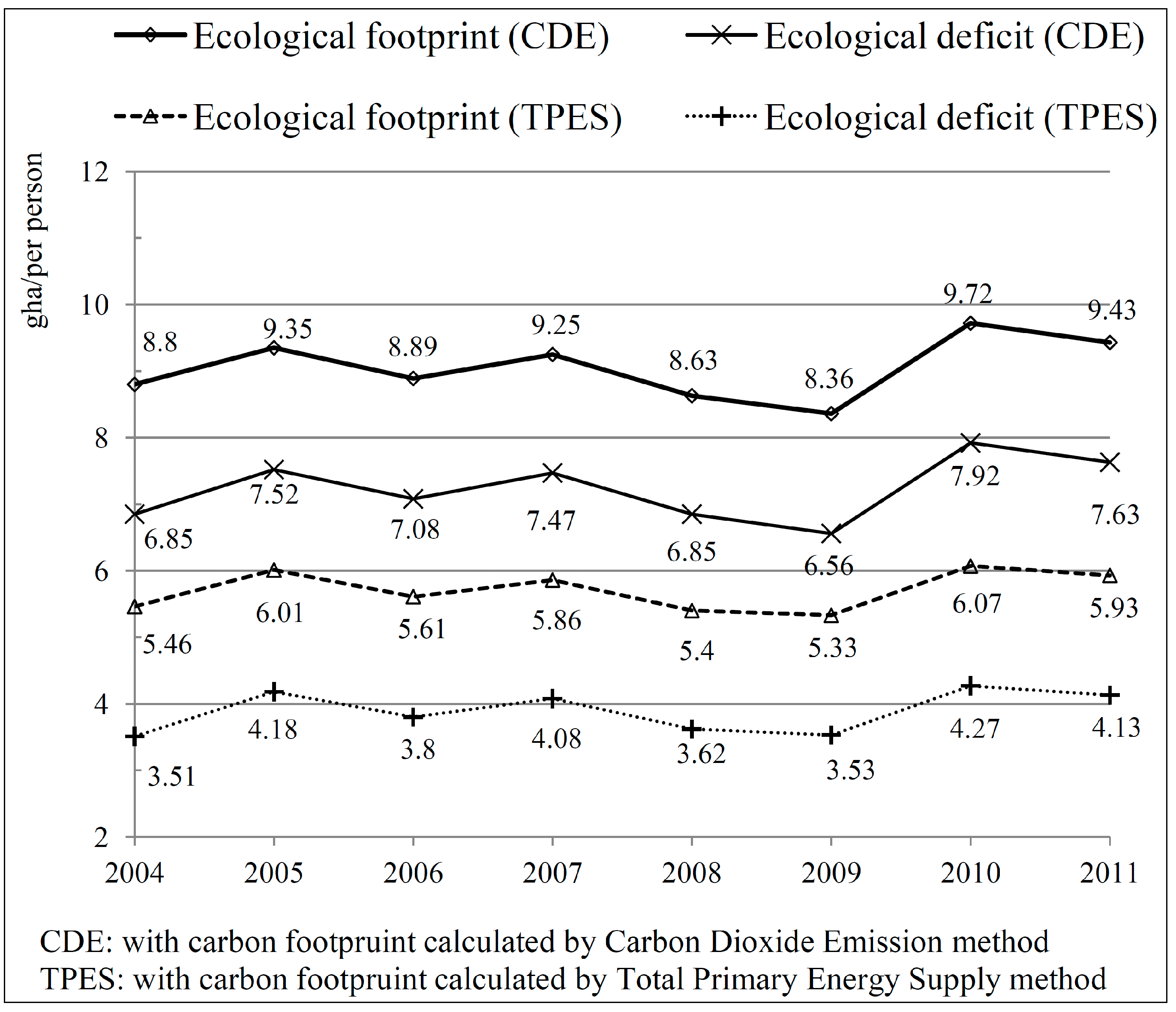 4. Trend of Ecological Footprint in Taiwan

Any theoretical framework necessarily imposes limitations on empirical work. Consequently, this study presents a case study of Taiwan, and is hindered by the following limitations.

5.1.1. The Use of Different Sub-Items of Land Uses Yields Conservative Results

To ensure comparability of the results herein with those of international research, the categorization herein was based on the structure that was used by the FAO and the IEA. However, some of the statistical items in various domestic statistical yearbooks differ from those used by the FAO and the IEA, preventing the categorization of some sub-items, which were therefore omitted in the calculations, yielding excessively conservative results for the ecological footprint of Taiwan.

5.1.2. The Mixed Use of Land as Cropland and for Grazing May Result in the Double Counting of Some Land Areas

In Taiwan, most pasture is cropland. One piece of cropland may be rotated between crops or economic plants and pasture. For consistency with the GFN framework, the grazing lands are separated from croplands herein. This method may result in double counting in some calculations of land areas.

5.1.3. Lack of Bioproductivity and Equivalence Factor for Taiwan

This study uses data on global bioproductivity and the global equivalence factor from the GFN to determine the yield factors and land use adjustments in the accounting of the ecological footprint of Taiwan. However, to support ecological footprint accounting for the purposes of policy-making in Taiwan, a bank of long-term data on land bioproductivity and equivalence factors is required.

Owing to Taiwan’s geographical characteristics, land use patterns and high population density, the yield factors and the equivalence factors that are used by the GFN may result in some errors in the ecological footprint accounts that are obtained herein. Accordingly, regular environmental surveys and thorough statistical data would provide more reliable ecological footprint accounting.

In the Third Symposium on the Ocean in a High CO2 World, 2012, 540 scientists from 37 countries reached a consensus that climate change has acidified the ocean at rates not seen for the past 55 million years. Reducing the CO2 level in the atmosphere is the only way to mitigate this effect [31].
According to the IEA [40], Taiwan’s CO2 emissions were as high as 11.31 tons per capita in 2011. The corresponding values for other Asian countries, China, South Korea, Singapore, Japan, Hong Kong, Thailand and Vietnam, were 5.92, 11.81, 12.49, 9.29, 6.37, 3.50 and 1.56 tons per capita, respectively. Taiwan ranked as the third greatest emitter in Asia and the 21st in the world. These data indicate the move toward sustainable development depends on shifting the “trade-off” between economic development and environmental protection in the direction of the latter. Environmental protection agencies promote energy conservation and carbon reduction. Governments will continue to seek to reduce emissions that are associated with industrial production and to reduce carbon consumption.

5.2.3. Promotion of Reduction of Food Waste and Recycling and Reuse in the Papermaking Industry

Research shows that Taiwanese residents are consuming an increasing amount of food. According to Taiwan’s Environmental Protection Agency (Taiwan EPA), the mass of recycled kitchen waste in 2004 was 299,265 tons and that in 2012 was 834,541, representing growth by a factor of 2.8 in eight years [53]. Therefore, the rise in the amount of food that is wasted by Taiwanese far exceeded the increase in their demand for food. If the government wants to reduce the food footprint, policies should seek to reduce kitchen waste. For example, the government could reduce the food footprint by criminalizing all-you-can-eat promotions. Government can reduce the forest footprint by encouraging the papermaking industry and industries that use wood to reduce wood utilization, and encourage the recycling and reuse of waste paper to reduce domestic demand for woods.

The authors would like to thank the Ministry of Science and Technology of the Republic of China, Taiwan, for financially supporting this research under Contract No. NSC102-2410-H-170-005-SS2 and Contract No. 103-2410-H-002 -182 -MY3. Ted Knoy is appreciated for his editorial assistance.

The authors contributed equally to this work. Yung-Jaan Lee conceived and designed the study and drafted the manuscript. Li-Pei Peng analyzed the data with discussions, depicted all figures and handled all versions of the manuscript submission.