Learning from the Neighbors: Economic and Environmental Impacts from Intensive Shrimp Farming in the Mekong Delta of Vietnam
Previous Article in Journal

The System Dynamics of Forest Cover in the Developing World: Researcher Versus Community Perspectives

:
Efforts to increase forest cover in the developing world will only succeed if the root causes of deforestation are addressed. Researchers designing reforestation initiatives tend to emphasize macro-level drivers of deforestation, about which they have extensive data and knowledge. On the other hand, local people have contextually based knowledge of forest cover dynamics in their region—about which external researchers may be largely ignorant. This type of perception gap between researchers and community members has led to many failed or insufficiently implemented projects. An emerging tool—group model-building with system dynamics—shows promise in its ability to integrate different perspectives on a complex problem such as forest cover loss. In this study, I use system dynamics modeling methodology to compare causal loop diagrams of forest cover dynamics on Negros Island, Philippines generated by researchers working for the World Wildlife Fund with causal loop diagrams generated by community members in upland Negros. The diagrams were significantly different, with very few variables in common, but both illuminate critical aspects of the deforestation problem on the island. I conclude that reforestation initiatives in the Philippines would benefit from incorporating all relevant information into a single, coherent model.
Keywords:
deforestation; development; group model-building; reforestation; Philippines

In this study, I compare a researcher-generated causal loop diagram of forest cover dynamics on an island in the central Philippines with a community-generated causal loop diagram of forest cover dynamics, to determine if there are significant differences between these two groups’ views of the issue. For this study, I am taking the view that the variable of interest is “forest cover”, which may decline (through deforestation) or increase (through reforestation) over time [8].
Negros island, located in the central Philippines, has historically been a region of high terrestrial and coastal biodiversity [27]. However, the island’s landscape, which was predominantly tropical seasonal forest as recently as the 1950s, has been changed dramatically through deforestation and intensive agriculture, with adverse consequences for the island’s biodiversity, water quality and forest resources. By some estimates, 95% of the island’s original forest cover has been removed [28]. The Philippine government has identified reforestation of the country’s mountainous regions as a development priority [14]. Local non-governmental organizations working in the uplands of Negros are also promoting reforestation projects for controlling erosion and protecting water supply.
Three prominent socio-economic patterns characterize Negros Island: a distribution of agricultural lands that disadvantages the poor; a high rural poverty rate; and a high population density [8,29,30]. Negros served as a center of Philippine sugar production beginning in the mid-1800’s, during which time land-grabbing by Spanish nobility was sanctioned by the colonial government for the purpose of building the country’s sugar export industry. Many large-scale landowners on Negros today are the descendents of these Spanish nobles, leaving the island’s poorer residents to practice marginal subsistence farming in steep mountainous areas [31]. Negros also has a higher incidence of families living in poverty at 22%, compared with the national poverty incidence of 17% [30].
The World Wildlife Fund published a study of Negros Island’s deforested condition and a causal loop diagram of the deforestation problem in 2000 [8]. I used this diagram as a benchmark to compare and contrast this researcher view with a community-based view of deforestation. The WWF research team conducted sectoral studies of Philippine biodiversity, demography, economy, and politics, and generated several causal loop diagrams specific to key points of concern for the organization (Figure 1). Accompanying text detailed the reasoning behind each diagram. The WWF’s goal was to identify the root causes of biodiversity loss in the Philippines, and forest cover was used as a proxy for biodiversity, given limited data availability on indigenous species.
To generate a causal loop diagram reflecting a local community’s view on the causes of deforestation on Negros, I traveled to the municipality of Canla-on, near one of the island’s remaining forest reserves and its highest peak. I attended a community workshop conducted by a local NGO, the Negros Oriental Institute for Rural Development (NIRD). The goal of this workshop was to identify risks facing the community, and to analyze the community’s vulnerability to and ability to mitigate these risks. Forest cover was an integral component of community risk vulnerability and was discussed extensively; multiple inter-related causes of forest cover change were agreed upon by the workshop participants. I supplemented the workshop material with follow-up interviews with NIRD staff, who have worked in the Canla-on region for over fifteen years. The causal loop diagram constructed from the workshop and interviews is included below (Figure 2). The participants in the workshop were not aware of the researcher-generated view of forest cover loss, so the second causal loop diagram was generated completely independently. 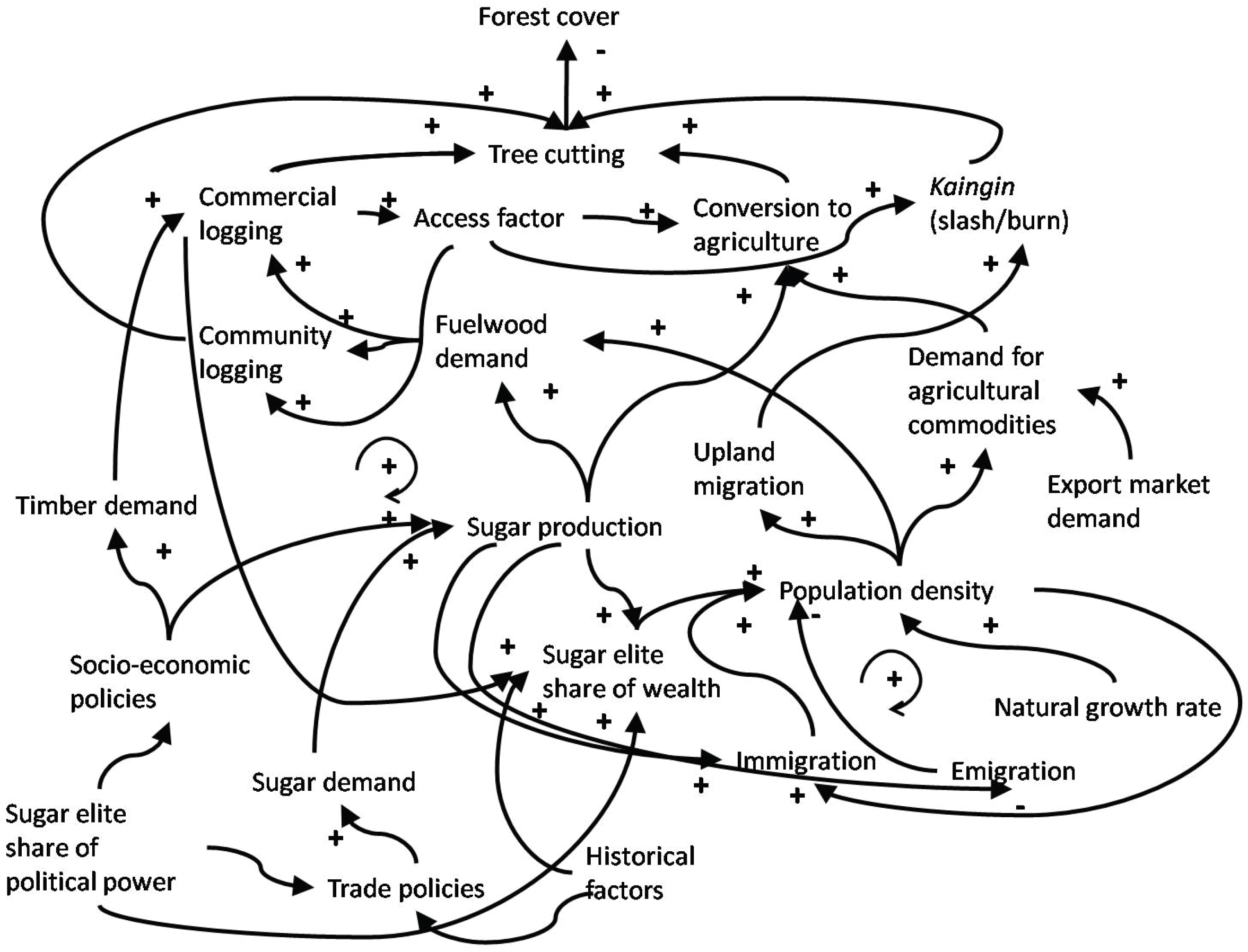 I am grateful to Grace Padura and Jun Mercado of the Negros Oriental Institute for Rural Development, who made this research possible. I am also thankful to A. Ligmann-Zielinska and R. Levine, who offered preliminary comments on the first draft of this manuscript, as did two anonymous reviewers.

© 2010 by the authors; licensee MDPI, Basel, Switzerland. This article is an Open Access article distributed under the terms and conditions of the Creative Commons Attribution license (http://creativecommons.org/licenses/by/3.0/).