Food Security and Conservation of Yukon River Salmon: Are We Asking Too Much of the Yukon River?

4. Strategies in Response to the Food Crisis

In this section, I examine the strategic response to the global food crisis of five major food aid providers, and whether and how concepts and practices of sustainability factor into these. The five case studies focus on the major food aid and developmental strategies and institutions associated with, respectively, the US, the World Food Programme (WFP), Canada, the European Union, and Japan. These examples merit investigation for two primary reasons. First, the three national governments and the EU were, for the years 1988 to 2008, the largest donors of food aid in the world (see Figure 1), accounting for over 79 percent of the total volume of global food aid provided [32]. Much of this was channeled through the WFP, which is the largest food aid organization in the world and the programming partner for most food aid donors; its strategies are covered in detail below as well. The US, Canada, the EU, and Japan are all also signatories of the Food Aid Convention (FAC), a major international agreement that forms part of the broader framework on international grain trade and aid under the International Grains Council. The FAC has been in force since 1967, with renewals in 1971, 1980, 1986, 1995, and 1999; the 1999 agreement expired in 2002, and has been renewed annually since then, with a more thorough renegotiation likely in the immediate future [41]. The FAC commits signatories to specific amounts of food aid donations, though these are expressed in equivalencies to wheat, reflecting the convention’s initial and overriding focus on surplus grain channeled into food aid programs created with surplus disposal as a major goal, while critics also point to problems regarding accounting, accountability, and transparency [41,42,43]. The case studies selected here are some of the major players within this agreement and will shape food aid strategies within the global aid architecture for the foreseeable future. 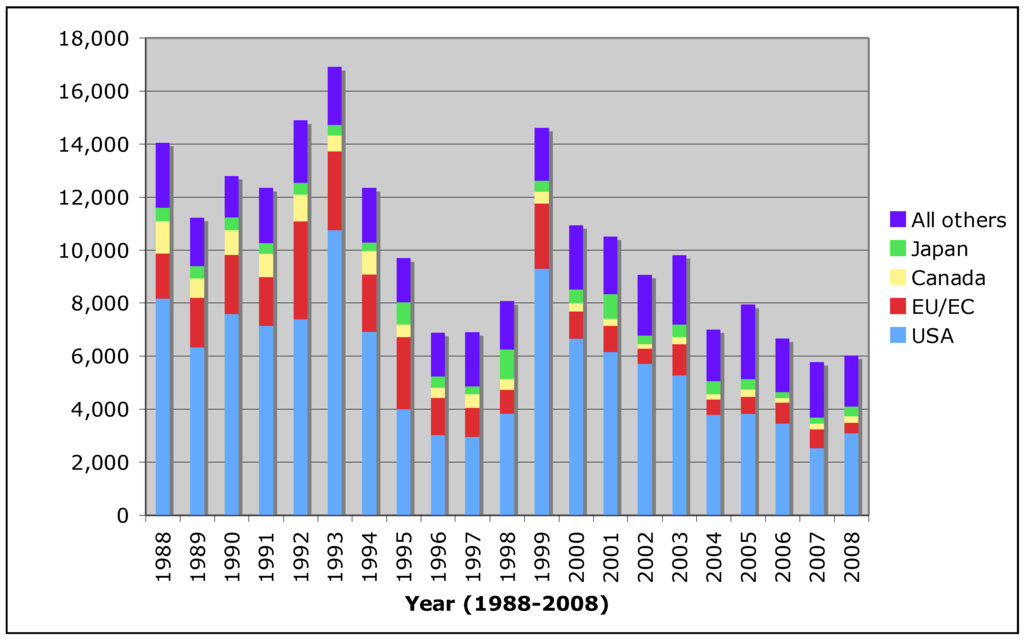 In the discussion of each government’s or institution’s strategic response to the global food crisis, focus is placed on proposed or adopted strategies for making aid more responsive to such events, and to recipient needs more generally, what this means within the longer term trajectory of food aid programming, and whether and how sustainability matters within this strategic shift. Two major usages of sustainability emerge from this analysis—one focused primarily on environmental management and outcomes in achieving or building food security, and one that refers to the operational effectiveness and longevity of aid programs, defined largely but not exclusively in relation to domestic political or foreign policy interests and priorities. Development and aid agencies are sensitive to public perception in the wake of humanitarian crises and disasters, and the premium on developing (or at least appearing to develop) a speedy and effective strategic response means that policy documents are readily available from state and multilateral development institutions. Accordingly, data used below comes from published strategy frameworks and policy documents obtained directly from institutional and government websites.

This analysis of major food aid providers’ conceptualization and use of sustainability leading up to and following the 2007–08 global food crisis demonstrates that, in the context of large-scale bilateral and multilateral food aid programs, sustainability continues to conjure multiple and sometimes incompatible meanings. In particular, sustainability is deployed in reference to two primary sets of concerns and practices, one environmental and the other operational. The former is usually articulated in terms of standard definitions of sustainable development, with emphasis on improving and balancing environmental management and economic growth in ways that reduce poverty. As shown, some providers (the US and Japan most clearly, and to a lesser degree Canada) stress economic growth more heavily and argue that sustainable paths to development and food security, and the best means to avert future food crises, are to be achieved through more and deeper engagement with global market forces and multilateral economic institutions. This reinforces a neoliberal political and economic project by turning environmental sustainability on its head, prioritizing the sustainability of economic growth rather than environmental quality, and directing the poor back to global markets as an answer to poverty and hunger without recognizing or addressing the contradictions of the current global regulatory regime.
The latter usage of sustainability as an operational term is found across all of the providers in varying degrees, and has developed largely from concerns over aid effectiveness. These, in turn, must be seen in the context of tightening official development assistance budgets in most donating countries, increasing program emphasis on participation in liberalized world markets and trade capacity building, and domestic political pressures to maintain aid’s instrumental value in geopolitical and national economic strategies. As noted, donors, especially the US, have long used food aid in this instrumental fashion, while domestic agricultural lobbies have strongly influenced the character of food aid programs as well. Although the global food crisis and intense ongoing debates over the utility and structure of food aid have had some impact on this situation for some providers (e.g., Canada’s decision to untie aid, and the EU’s commitment to maintain a strict humanitarian focus in aid selectivity), the fundamental problems of the global aid architecture and the contradictory character of many food aid programs remain largely unchanged. Emphasizing sustainability in the operational sense becomes a useful means for aid institutions to respond to domestic critics, and to craft new measures of accountability and development progress. The strong reliance on an operational or programmatic understanding of sustainability, however, does not accurately or adequately captures aid’s impacts on the vulnerable and hungry, and does not guarantee that aid will effectively build or promote sustainable development. Indeed, the placement of operational foci as a primary point of emphasis in aid agencies’ use of sustainability seems more attuned to preserving political standing in different national contexts than it does to eradicating poverty and achieving better environmental and resource conservation.
In sum, sustainability after the global food crisis remains a shifting ground for combating hunger, poverty, and vulnerability, and a contentious and slippery concept to put into practice for food aid providers who work under widely diverging criteria and rubrics. Perhaps the most profound disconnect evident in food aid providers’ rhetoric of sustainability stems from the widespread silence regarding both the causes of the food crisis, and the increasingly hard-to-ignore critiques and consequences of a deeply undemocratic and crisis-prone process of food system globalization. Aid providers can contribute much to debates over financial speculation and its creeping reach into global food markets, and the strategic use of food resources in emergency situations clearly has saved many millions of lives and offers strong potential for moving toward long-term poverty reduction and development. It is therefore frustrating that, following the worst global food crisis in over a generation, some of the world’s largest food aid providers have little or nothing to say about the environmental consequences of industrialized agriculture or the dangers of futures speculation, proffer solutions that rely on greater use of biotechnology, foreign corporate ownership of agricultural land, and further integration of the poor and vulnerable into volatile world commodities markets, and increasingly winnow their selectivity criteria for aid deservedness based on narrow notions of effectiveness driven by domestic pressures to produce short-term results. As Bassett argues, however, progress toward more effective models of sustainability in development and food security enhancement strategies must build from “a high-quality agroecologic matrix … complemented by a high-quality socioeconomic matrix that promotes human development” ([71], p. 5697). Closer attention to and integration of critiques leveled at both food system globalization and sustainable development, as articulated not only by aid experts and practitioners but by social movement groups representing and comprised of peasants and small farmers, could open the door to a more useful engagement with sustainability as a basis for real reform of food aid and food provisioning. Such a shift would require considerable political will, which is currently in short supply among major aid providers.

Research support for this project was provided by a grant from the Social Sciences and Humanities Research Council of Canada. The author would also like to thank three anonymous referees for their comments and suggestions on this work.