Morphological Assessment of River Stability: Review of the Most Influential Parameters
Previous Article in Journal

Residency, Site Fidelity, and Regional Movement of Tiger Sharks (Galeocerdo cuvier) at a Pupping Location in the Bahamas

Understanding space use and movement behavior can benefit conservation and management of species by identifying areas of high importance. However, this can be challenging for highly mobile species, especially those which use a wide range of habitats across ontogeny. The Bahamas is hypothesized to be an important area for tiger sharks, but the utility of the area for this species within the broader western North Atlantic is not fully understood. Therefore, we assessed (1) whether the area near Bimini serves as an important pupping location for tiger sharks, (2) their level of residency and site fidelity to the area, and (3) regional dispersal across ontogeny. Frequent captures of young-of-year tiger sharks, as well as ultrasonography showing near-term and recently postpartum females supports the hypothesis that pupping occurs in the area. However, small juveniles had low overall recapture rates and sparse acoustic detections near Bimini, indicating they do not reside in the area for long or may suffer high natural mortality. Large juvenile and sexually mature tiger sharks had higher overall local residency, which increased during cooler water winter months. The probability of dispersal from Bimini increased for larger individuals. Repeated, long-term site fidelity was displayed by some mature females, with several returning to Bimini across multiple years. Satellite tracking showed that tiger sharks extensively used areas outside of The Bahamas, including traveling more than 12,000 km. Together, these results show that Bimini is an important area for tiger sharks, serving as a pupping ground, rather than a nursery ground, a finding which could be incorporated into future conservation and management efforts. View Full-Text
Keywords: shark; essential habitat; reproduction; regional movement; telemetry shark; essential habitat; reproduction; regional movement; telemetry
►▼ Show Figures 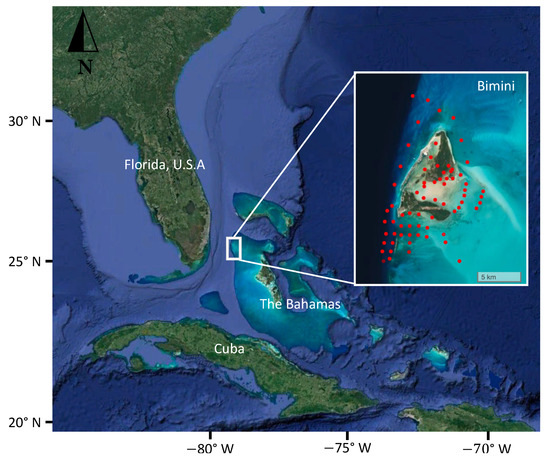