2.1. Concept of the Target Gas Engine

This study is intended to be the first step toward entering the gas engine market. Therefore, we aimed at developing a spark-ignited-type gas engine in an easy and inexpensive manner. The target output of the engine was 1.6 MW (200 kW per cylinder); aiming for the best performance among engines of the same class, the target engine efficiency was 45% [33]. Further, considering land power generation as a future market, the standard NOx emissions were limited to 50 ppm at 15% O2 composition, conforming to the regulations for Korean land power engines. In addition, the target brake mean effective pressure at an engine speed of 1000 rpm was 2.1 MPa, which is significantly higher than that of a typical gas engine. The development goals and operating conditions of the gas engine are summarized in Table 1.
The above-mentioned development objectives—gas engines with a significant level of output performance—are considerably difficult to achieve because of abnormal combustion conditions such as knocking and misfiring [34]. To overcome these challenges, several development technologies were applied.
High-efficiency and high-output gas engines encounter several problems such as knocking and increased NOx emissions owing to high heat loads. We applied the Miller cycle and lean combustion techniques to solve these problems [35,36]. The Miller cycle improves thermal efficiency by reducing the compression work, and this is achieved by closing the intake valve early, as depicted in Figure 2 which of intake cam profile is composed of conventional com profile(blue line) and miller cam profile between red line and red dot line. Further, the Miller cycle reduces knocking and NOx emissions simultaneously by lowering the combustion chamber temperature. These Miller cycles were realized through design calibration of the cam shape and using a high-performance turbocharger to compensate for the reduction in the amount of the intake mixture [37].
Lean combustion enables complete combustion, which can be expected to improve thermal efficiency. However, if the lean level is expanded, it may cause combustion instability. Therefore, an appropriate lean limit must be derived [37]. In this study, NOx reduction was realized as lean combustion [38,39]. Although lean combustion can reduce the temperature of the combustion gases and NOx emissions, it causes several problems such as combustion instability, incomplete combustion, and misfiring. To solve these problems, a precombustion chamber method was applied, and the piston shape and turbulence flow were optimized. A little richer fuel mixture was supplied and ignited by a spark plug in the precombustion chamber, and the leaner mixture in the main chamber was combusted by the flame ejected from the precombustion chamber. The optimization of piston shapes also facilitated lean combustion by activating turbulence and flame propagation.

2.2. Components of the Main Gas Engine

A photograph and key specifications of the 1.6 MW gas engine developed in this study are presented in Figure 3 and Table 2, respectively.

The gas engine used an SI method, with ignition coils and a spark plug installed on each cylinder. The ignition timing was controlled by the engine control and could be adjusted from 20° CA BTDC up to 10° CA ATDC using the crankshaft and camshaft pick-up signals. The engine operation considered the same ignition timing to improve the throttle valve behavior and load fluctuations in the engine. Meanwhile, the ignition timing was independently controlled for each cylinder for stable combustion and minimization of pressure fluctuations between cylinders.

In dedicated gas engines, engine control systems are paramount for stable operation and prevention of abnormal combustion conditions, such as knocking and misfires. Thus, as the initial stage of gas engine development, the engine control and monitoring functions of the control system were reinforced, as shown in Figure 6.
The engine control system prevented knocking by retarding the ignition timing by 0.4° CA when knocking occurred and repeated this delay up to a maximum of 8.0° CA. If knocking was successfully avoided by delaying the ignition timing, the ignition timing returned to its original value, and if knocking continued despite delayed ignition up to 8.0° CA, the load was reduced. The likelihood of misfiring in the combustion chamber was determined by the temperature change in exhaust gas; when the engine misfired, the air:fuel ratio of the mixture was adjusted. The engine control system was built to enable real-time monitoring of all these situations.
As diesel engines and gas engines have fundamentally different combustion mechanisms, customization of certain engine parts is necessary. In the developed gas engine, a mixture was provided for the combustion chamber such that the overlap period was reduced. This reduced the flow of the mixture toward the exhaust valve during the valve overlap period, and the camshaft was redesigned according to the application of the Miller cycle. For the application of Miller cycles, high-performance turbochargers were used, and a two-stage air cooler was employed to enhance the cooling effect of the compression mixtures. In addition, aluminum pistons were applied to avoid knocking caused by the hot spots on the top of the piston, and simultaneously, the piston inertial force was reduced. As a high compression ratio in conventional diesel engines leads to knocking, we reduced the compression ratio in the gas engine. However, because this reduced the thermal efficiency, an appropriate compression ratio was selected in consideration of the maximum pressure in the combustion chamber.
Meanwhile, owing to changes in gas fuel, all diesel fuel supply systems were removed. The air motor method operated by compressed air was adopted as the engine starting system because the mixture was supplied to the combustion chamber. In addition, a safety device was added to the crankcase to prevent explosion by unburned gas.

The fuel gas used for performance evaluation of the gas engine was natural gas with a CH4 content of more than 90% and a lower heating value of ~39.33 MJ/Nm3. The fuel characteristics are listed in Table 3.
The methane number of the supplied natural gas (73) was lower than 80, which is the value that is generally considered in performance evaluation. Methane number is a value representing the anti-knock property of the gas fuel and affects the thermal efficiency and output performance of the engine. The gas fuel supply pressure should be maintained at a minimum of 0.55 MPa in consideration of the fuel pressure supplied to the precombustion chamber.

Figure 9 shows the NOx emission characteristics in response to the engine load fluctuations. NOx emissions must comply with environmental regulations. Experiments were performed in triplicate (once per day) under identical conditions, and these experiments have been denoted hereafter as Pre A_Test1, Pre A_Test2, and A_Test, for each consecutive day.
As shown in Figure 9, the target of <50 ppm NOx emission was satisfied; this was the emission control value at overall load. The NOx emissions were ~44–48 ppm, corresponding to 0.85 g/kWh. This value is ~9.4% of the IMO Tier II standard of the International Maritime Organization and also satisfies Tier III regulations. This implies that for the dedicated gas engines, NOx emission regulations can be satisfied without special post-treatment devices such as SCR (selective catalytic reduction) and EGR (exhaust gas recirculation). Meanwhile, when NOx emissions increase, thermal efficiency is improved. Therefore, if the excessive margin of NOx emission in some loads is reduced, some improvement in thermal efficiency can be expected.

The results of this study indicate that the development of the 1.6 MW independent gas engine model was completed successfully. The following conclusions can be drawn from the study:
These results indicated that an appropriately designed gas engine can be a feasible alternative to a diesel engine, with a relatively lower cost and reduced greenhouse gas emissions.

This work was supported by the National Research Foundation of Korea (NRF) grant funded by the Korean government (MSIT). (No. 2021R1A2C1007789). 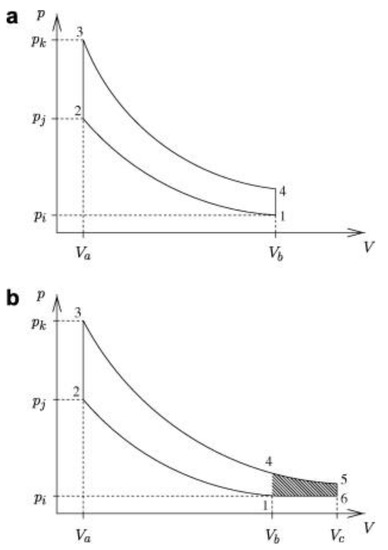 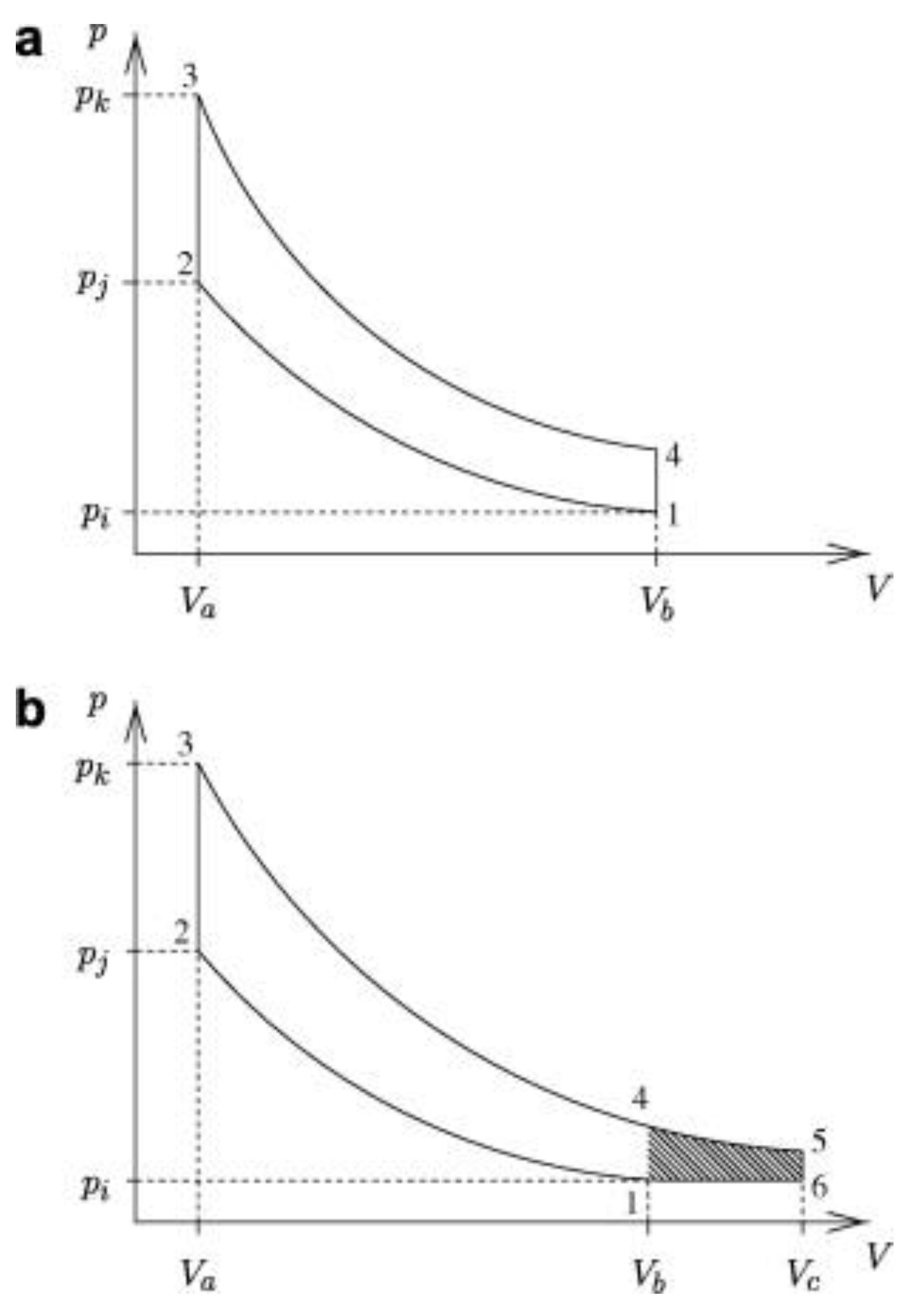 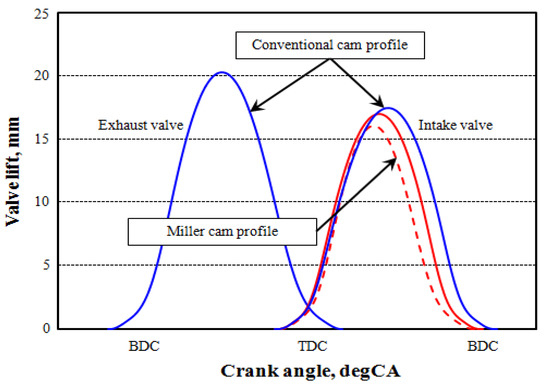 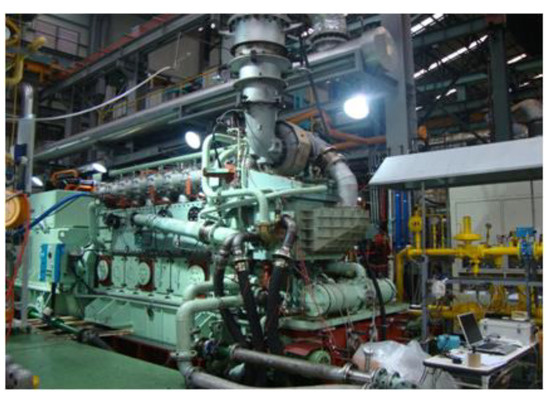 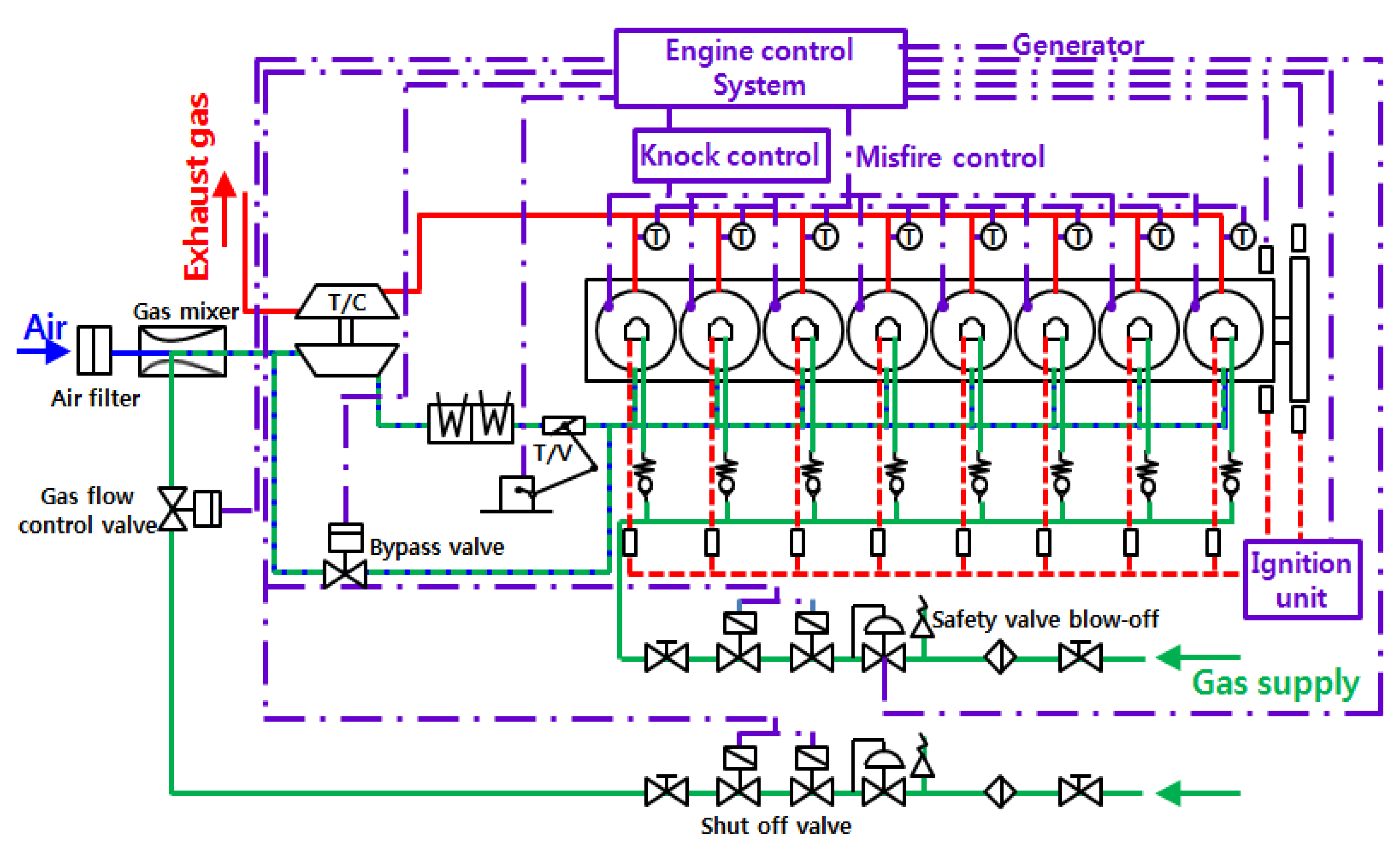 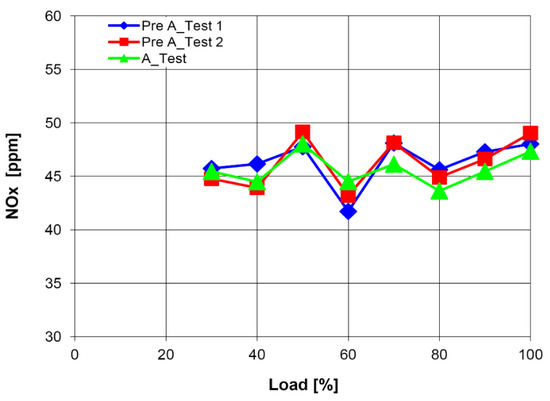 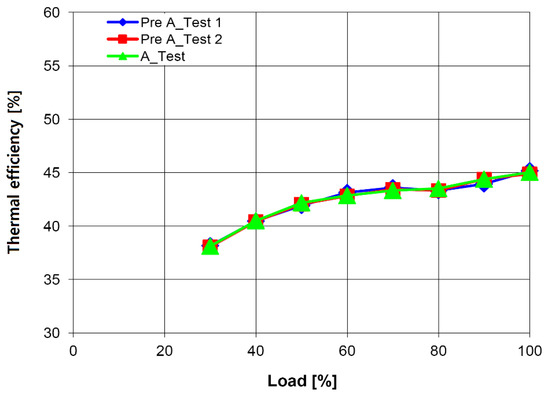 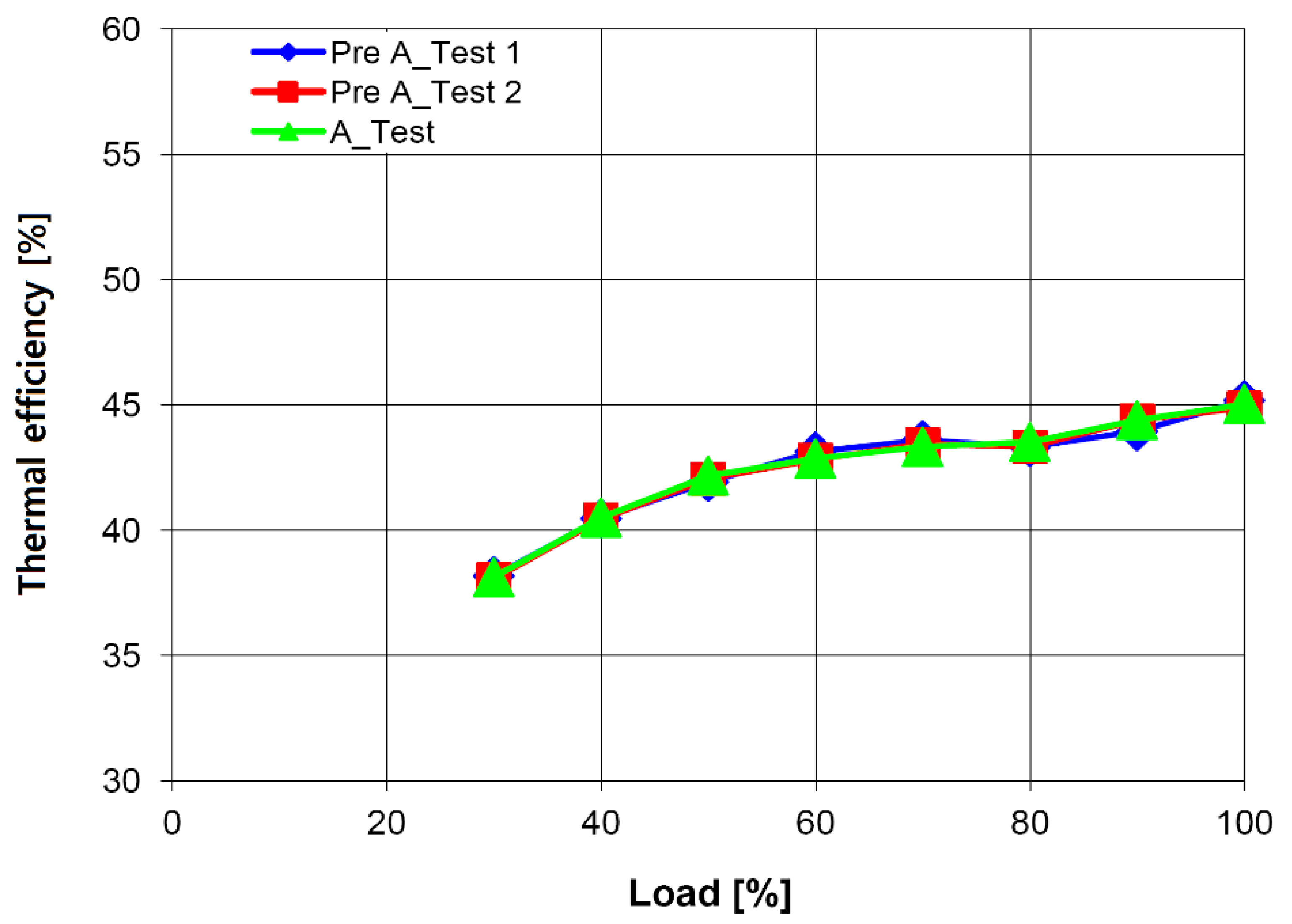 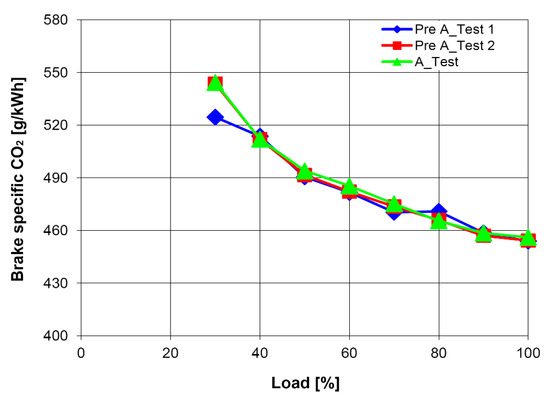 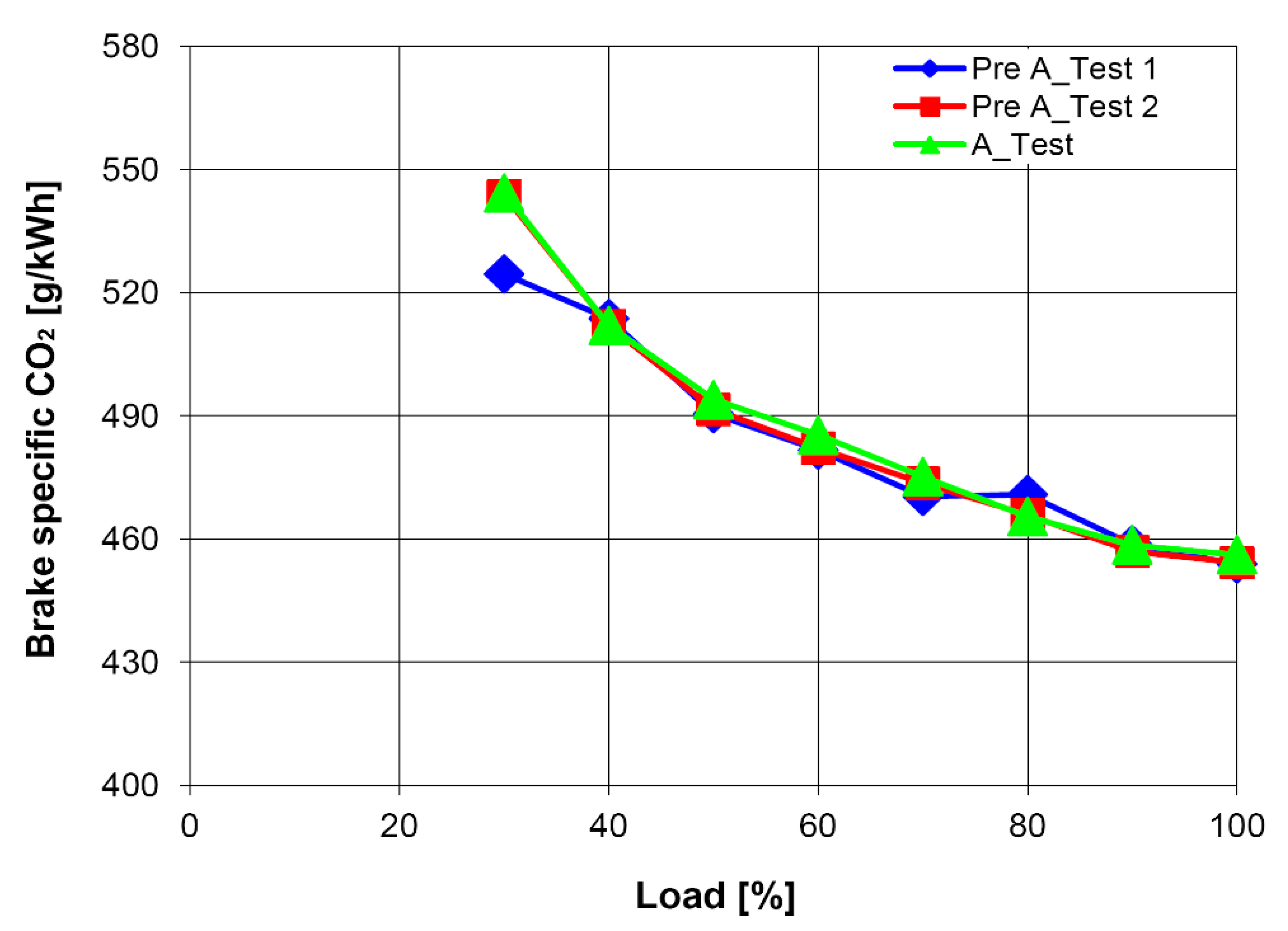 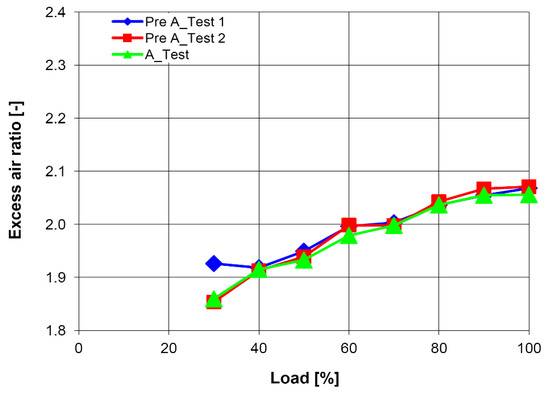 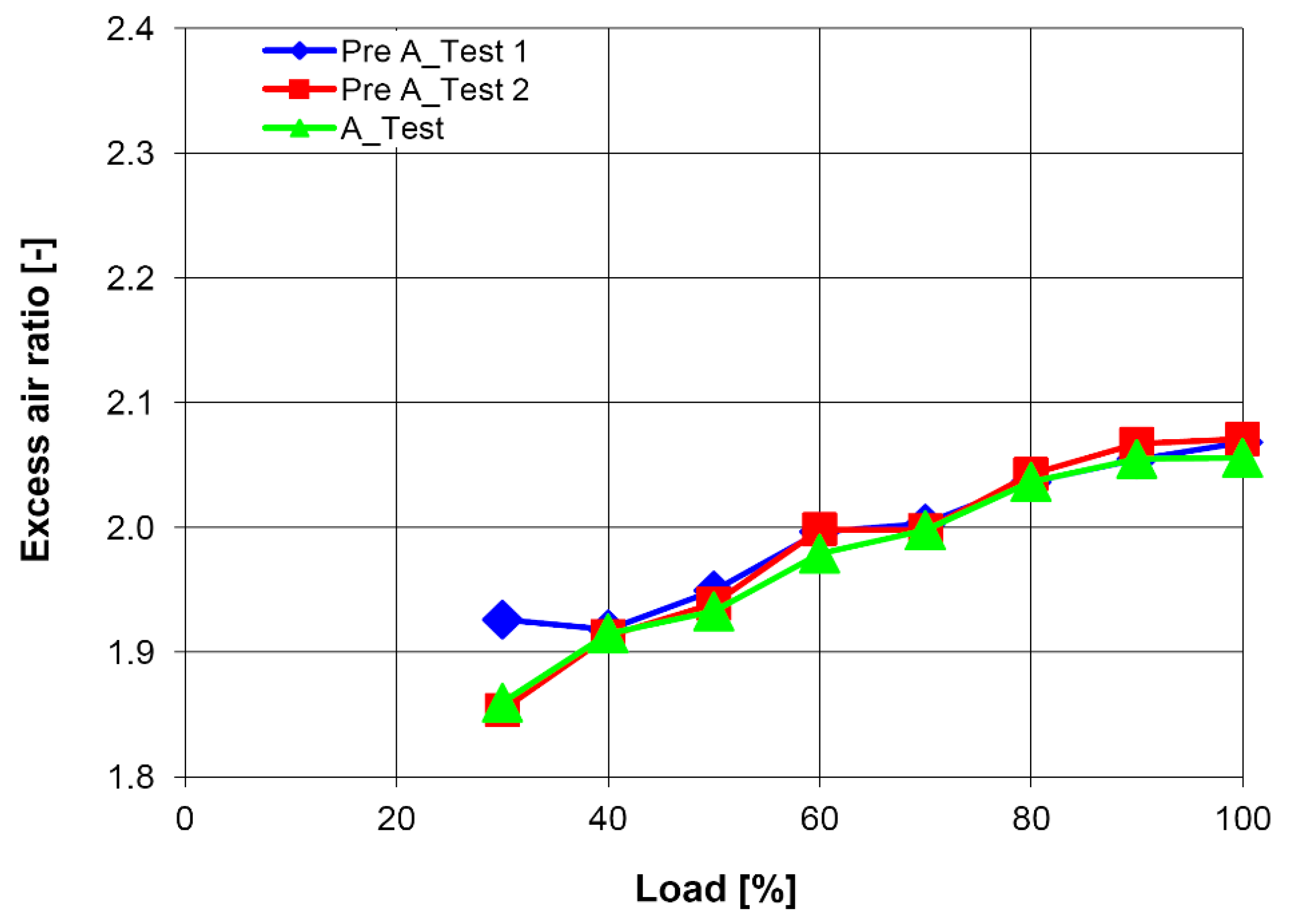 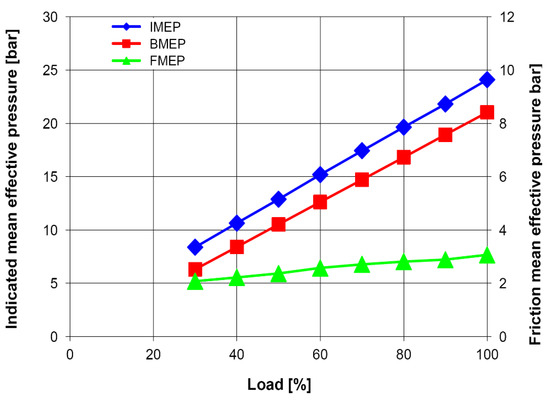 Table 3. Gas characteristics for the engine performance test.
Table 3. Gas characteristics for the engine performance test.
© 2021 by the authors. Licensee MDPI, Basel, Switzerland. This article is an open access article distributed under the terms and conditions of the Creative Commons Attribution (CC BY) license (https://creativecommons.org/licenses/by/4.0/).
We use cookies on our website to ensure you get the best experience. Read more about our cookies here.
Accept
We have just recently launched a new version of our website. Help us to further improve by taking part in this short 5 minute survey here. here.
Never show this again