Baltic Seaports are a part of the sustainable global transport infrastructure. The main competitors of the Baltic countries in Baltic Sea region are the ports of Lithuania, Latvia, and Estonia. The ports of all three Baltic States are important transit corridors, connecting not only East and West, but also South and North. Periodical investments, modernization, and the construction of new terminals allow the Port of Klaipeda to successfully compete with neighbouring ports and strive for leadership positions. Thus, the aim of our study is to investigate the competitive environment of the Baltic Sea region. We use systematization, grouping, summarization of the scientific literature, data collection, comparison, financial analysis, and capacity calculation. The main results show that the Port of Klaipeda, a seaport on the eastern Baltic coast, is an important hub of the East-West (IXB) transport corridor, connecting roads and sea routes in this direction. With the accession of new members, including Lithuania, to the EU in 2004, the Baltic Sea became the internal Sea of the Union. Many Baltic seaports belong to the same system and organizations (ESPO, BPO). EU ports policy provides them with equal requirements for security, transport regulation, environmental protection, anti-air pollution, and sustainable development. The results obtained enable exploration perspectives. This includes a feasibility study for port development and attracting new investment from foreign capital markets in the Baltic Sea region. View Full-Text
Keywords: shipping geography; Baltic ports performance; financial analysis of Baltic ports shipping geography; Baltic ports performance; financial analysis of Baltic ports
►▼ Show Figures 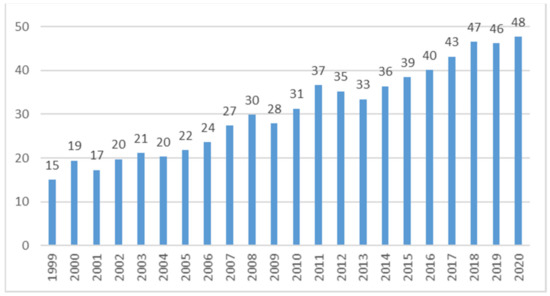