Solow residual (SR), data envelopment analysis (DEA) and stochastic frontier analysis (SFA) are the three most widely used methods to measure TFP, in which SR and SFA belong to parameter estimation, and DEA is non-parameter estimation. Because the measure of resource misallocation is based on the estimation of production function, it may face serious endogeneity if using parameter method to measure TFP [54]. Therefore, this paper adopts the non-parametric DEA-Malmquist index to quantify the industrial TFP at the provincial level in China. Since the main purpose of this paper is to investigate the effect of environmental regulation and resource misallocation on industrial TFP level rather than on its growth rate, the Malmquist index is converted into the cumulative TFP index following Kumar and Managi (2008) [55]. Meanwhile, the cumulative Malmquist index can also reflect the dynamic change of industrial TFP, to a certain extent, and it is embedded in the impact of external factors such as business cycle on TFP. When analyzing the impact of environmental regulation and resource misallocation, it is not necessary to quantify the effect of business cycle. The data for measuring industrial TFP is the same as that used for quantifying resource misallocation, and we are not going to repeat it. It should be noted that due to the serious lack of statistical data in provincial industrial sub-sectors (mining, manufacturing and utilities), the industrial TFP calculated here is an aggregate indicator. With the gradual improvement of the statistical system and the increase of data availability, we are very happy to take sub-industry samples in the follow-up study to discuss the issue of this paper.

In order to obtain a robust estimation, we consider some control variables in our models, including the level of economic development, industrial structure, degree of openness, and government regulation and control ability. They are measured by the logarithm of GDP per capita (Lnpgdp), the proportion of the added value of secondary and tertiary industries (Indstrc), the logarithm of foreign direct investment (Lnfdi) and the logarithm of the local fiscal general budget expenditure (Lnexpdt). The raw data is collected from the National Bureau of Statistics.
In addition, as provincial pollution emission data is only updated to 2017, and the National Bureau of Statistics no longer publishes the absolute value of fixed asset investment in each province since 2018. Before 1997, Chongqing was a part of Sichuan province and its data was not independent. Therefore, the sample of this paper is a panel data consist of 31 provinces in China from 1997 to 2017. Table 1 summarizes the descriptive statistics of key variables that are used in this study.

5.1. The Impact of Environmental Regulation on Industrial TFP

5.2. The Impact of Resource Misallocation on Industrial TFP

To test the validity of hypothesis 2, Equation (2) is used to estimate the impact of resource misallocation on industrial TFP at the provincial level in China. Models (3) and (4) in Table 2 report the regression results. The difference is whether it is capital misallocation or labor misallocation, the impact on industrial TFP should keep spatial and time-period fixed effects of the model at the same time. Similarly, the impact of resource misallocation on industrial TFP is decomposed into direct and indirect effects, and the results are shown in rows (3) and (4) in Table 3.
It can be seen that the direct and indirect effects of capital misallocation () are significantly negative, which is consistent with the Hypotheses H2a and H2b. In fact, almost all studies in this field have shown that misallocation of capital or labor may lead to significant losses in aggregate TFP. The representative studies such as Restuccia and Rogerson (2008), Hsieh and Klenow (2009) and Bartelsman et al. (2013) not only confirmed this conclusion in theory, but also compared cross-county productivity differences using empirical data [41,43,58]. Kim et al. (2020) also got the similar results in the study of South Korea, which is highly comparable with China [59]. However, the indirect effect of labor misallocation () is significantly positive, which is contrary to the hypothesis H2b. This may be related to the strong mobility of labor factors and regional competition. The reason for labor misallocation in a region is likely to be the siphon of labors in its surrounding areas. In the case of little change in the total amount of labor resources in a short term, the flow of labor factors between regions often presents the characteristics of “beggar-thy-neighbor.” Overall, the total effects of capital misallocation and labor misallocation are significantly negative, which means that resource misallocation causes significant losses of industrial TFP at the provincial level in China.

5.3. The Resource Reallocation Effects of Environmental Regulation and Its Impact on Industrial TFP

Considering that the estimation results of spatial econometric model are sensitive to the setting of spatial weight matrix, we use the inverse distance matrix based on the Euclidean distance between provincial government stations instead of the adjacency matrix to test the robustness. The re-examination of Hypotheses H1, H2 and H3 shows that the parameter symbols and significance still maintain a strong consistency, although there are differences in the absolute magnitude between the estimated values of variable coefficients and the decomposition of spatial effects. The latter is what we concern, and it is enough to ensure that the previous analysis results are of robustness and credibility. For detailed results of robustness test, please refer to Appendix D.

Appendix A. Detailed Calculation of the Degree of Resource Misallocation at the Provincial Level in China

Appendix B. Spatial Distribution of Resource Misallocation in China 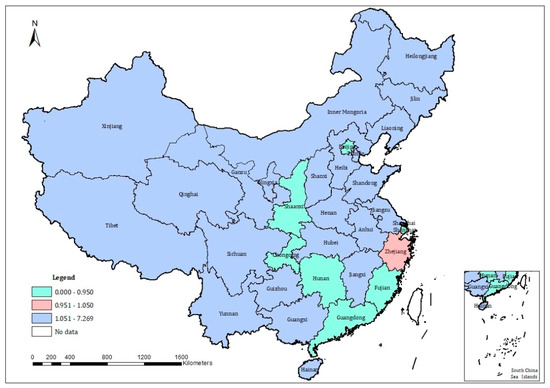 Appendix C. Variation Trend of Industrial TFP for Each Province during 1997–2017