Groundwater Resources in the Main Ethiopian Rift Valley: An Overview for a Sustainable Development
Next Article in Special Issue

The Norwegian Vehicle Electrification Policy and Its Implicit Price of Carbon

The rapid market uptake of battery and hybrid electric cars in Norway is unparalleled. We examine the fiscal policy instruments behind this development. In essence, the Norwegian policy consists in taxing internal combustion engine vehicles rather than subsidizing electric ones. There are 14 different fiscal incentives in place bearing on vehicles, fuel, or road use. All of them are in some way CO2-differentiated. In the tradition of positive economics, we derive the price of carbon implicit in each policy instrument and in the total package of taxes and subsidies. The price of carbon characterizing the trade-off between conventional and battery electric cars in Norway as of 2019 exceeds €1370 per ton of CO2. For light and heavy-duty commercial vehicles the corresponding prices have been conservatively estimated at €640 and €200 per ton of CO2, respectively. In addition, the penalty incurred by automakers for not meeting their 2020/2021 target under EU Regulation 2019/631 corresponds to a carbon price of the order of €340 per ton of CO2. As compared to the price of emission allowances in the European cap-and-trade system, the price of carbon paid by automakers and Norwegian motorists is one or two orders of magnitude higher. View Full-Text
Keywords: sustainable transportation; greenhouse gas mitigation; automobiles; vehicles; tax; subsidies; incentives; regulation; carbon sustainable transportation; greenhouse gas mitigation; automobiles; vehicles; tax; subsidies; incentives; regulation; carbon
►▼ Show Figures 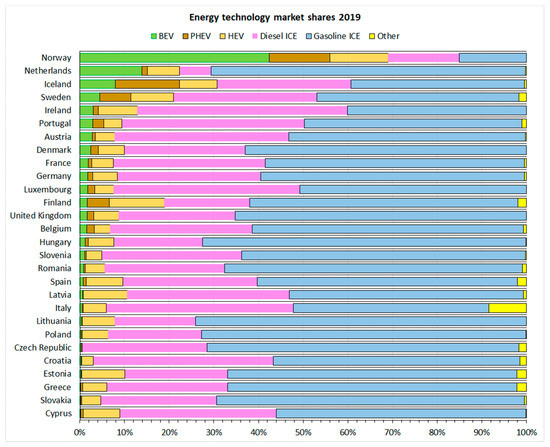