How Are Landscapes under Agroecological Transition Perceived and Appreciated? A Belgian Case Study

Foreign agricultural investment is a part of FDI. There are a large number of theoretical studies on corporate FDI and its location selection. We quote several influential theories to study the characteristics of international capital flows, as shown in Table 1.
In general, multinational companies in developed countries are more inclined to invest in other developed countries. The investment strategies of companies in developing countries are more inclined to invest in neighboring developing countries first, and then gradually transfer to developed countries with enough experience obtained. As for the influencing factors, capital, market, management, and technology are the main factors affecting the selection of investment location. It is worth noting that these theories mainly focus on the non-agricultural sectors. Agricultural investment has the characteristics of high risks, long cycle and high scale economic threshold, thus it is worthwhile to study whether the location selection has different rules.

We introduce the push-pull perspective into the analysis of the process of agricultural foreign investment. Whether agricultural foreign investment actually takes place, on the one hand, depends on the “thrust”, that is, the investment motive of the enterprise. In other words, can the company make a profit if it invests in this region? The motivation for companies to invest in host countries generally includes resources, labor, markets, and technology [39]. On the other hand, it depends on the “pull”, that is, the demand for foreign capital in the host country, including promotion of food production, technology transfer and employment [40]. The demand can also be interpreted as the inherent needs of agricultural development in developing countries. In addition, whether an investment occurs depends on the “intermediate factor”, namely, the investment environment of the host country [41]. Before investing, enterprises will consider the impact of investment environment factors. Therefore, we construct an indicator system from three aspects: investment demand, investment motivation and investment environment.

Dunning divided the FDI motives into different types such as resource seeking, market seeking, efficiency seeking and strategic asset seeking [39]. Therefore, we will measure the investment motives of the company from the following aspects (Table 2).
(1) Agricultural resources. Rich natural resources are an important material basis and favorable conditions for industrial development. In the process of foreign agricultural investment, cultivated land is an important resource that enterprises value [46]. We use the indicator of arable land (hectares per person) to measure the resource endowments of countries.
(2) Market. Many companies invest in agriculture abroad because of the motivation to circumvent trade barriers and increased market share. Knickerbocker’s Oligopolistic Reaction Theory argues that FDI tends to flow to countries with developed capital markets [31]. Countries with larger market sizes are more attractive to corporate investment. We use the indicator of market size to measure the market of countries.
(3) Efficiency. Enterprises engaged in agricultural foreign investment need to hire local labor [47], and the effective matching of labor supply and demand is an important condition for the low-cost expansion of efficiency-seeking enterprises [48]. We use the indicator of labor market efficiency to measure the labor costs of investment.
(4) Agricultural technology. Some enterprises choose developed countries to invest in order to track international advanced technology and improve the technical content of agricultural products [49]. We use the indicator of cereal yield (kg per hectare) to measure the level of agricultural technology in each country.

We select the following variables to comprehensively examine the economic, political, social and legal environment of countries (Table 2).
(1) Stability of the economic environment. FDI enterprises hope to obtain stable economic returns, and the stability of the host country’s economic environment is an important factor to consider [50]. We use inflation (GDP deflator) to measure the economic fluctuations of the host country. Generally speaking, the lower the inflation rate of a country, the more favorable the investment environment.
(2) Political and legal environment. Countries with stable political conditions, high-functioning government, and sound legal systems have a better investment environment and will reduce political, legal and social risks in the process of corporate investment [51]. We use The Worldwide Governance Indicators to measure the political and legal environment of countries, including Political Stability and Absence of Violence/Terrorism, Government Effectiveness, Control of Corruption, Regulatory Quality, Rule of Law, Voice and Accountability. In order to facilitate the subsequent calculations, we take the average of these indicators as a general indicator to measure the investment environment of countries.
(3) Institutional conditions. Companies will also take into consideration the institutional conditions of the host country [52]. If the host country protects investors, it will greatly reduce the operational risks of enterprises and attract enterprises to invest. We use the investor protection to measure the institutional conditions of a country’s investment.
(4) Infrastructure. The quality of the infrastructure is an important aspect of assessing the host country’s investment environment [53], especially the transport infrastructure. If a country’s infrastructure is too poor, it will significantly restrict the p of investment projects. We use the transport infrastructure to measure the quality of infrastructure.
Taking into account the comprehensiveness and accessibility of the data, we hope to choose the value of the most recent year of the indicators as the research period. We use cross-section data consisting of the values of the most recent year updated for each indicator from 135 countries. Since the data year of each indicator is different, some indicator data are only updated to 2013, such as Food Supply-Crops Primary Equivalent, and some indicator data are updated to 2018. The indicators and data sources we selected are shown in Table 2.

We use SPSS22.0 software for principal component analysis to assess the investment demand, investment environment and investment motivation of countries.

Methodology, writing—original draft preparation, X.J.; conceptualization, writing—review and editing, funding acquisition, Y.C. All authors have read and agreed to the published version of the manuscript.

Special thanks are given to three anonymous reviewers for their insightful and constructive suggestions. 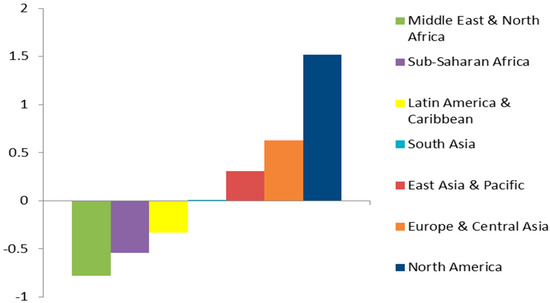 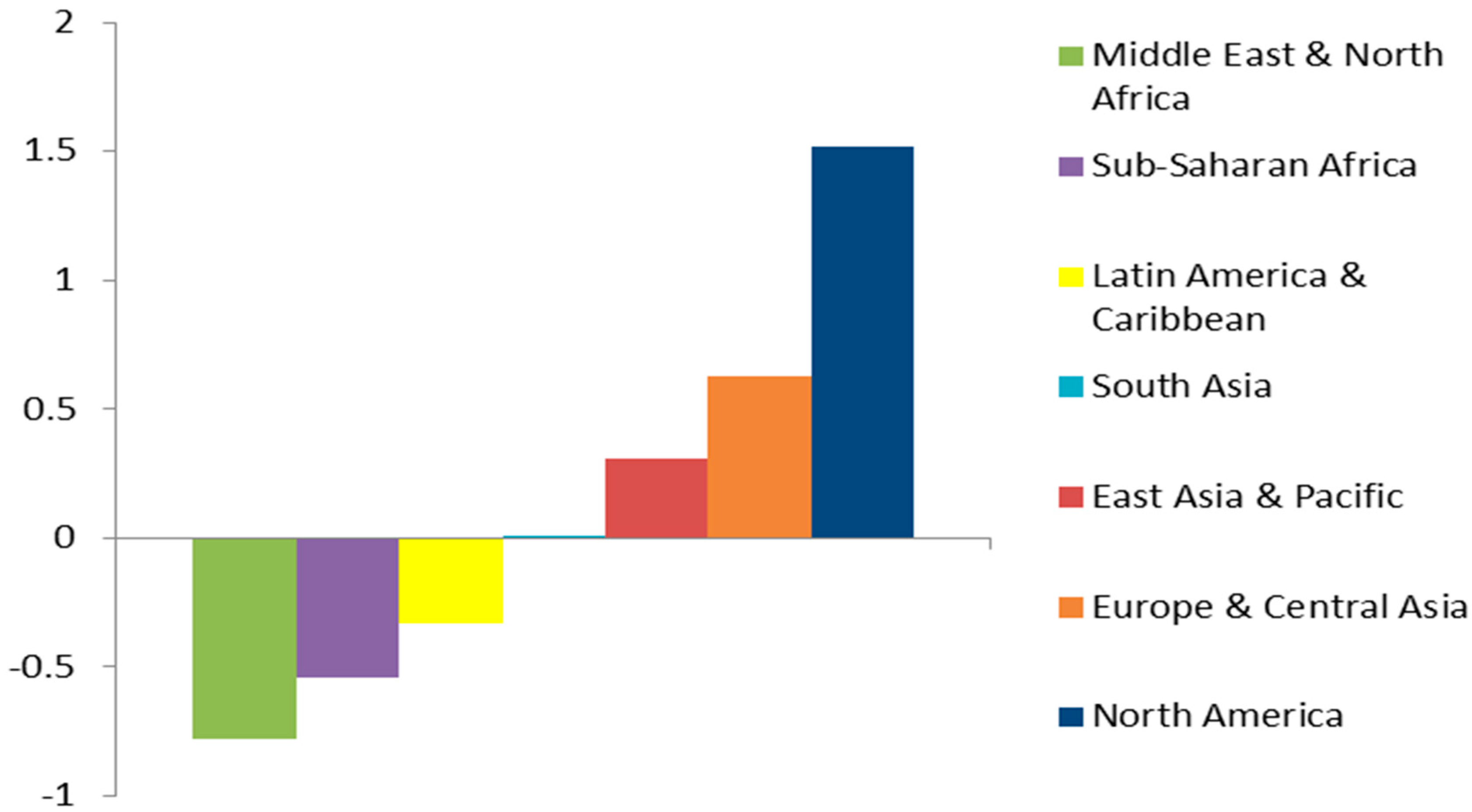 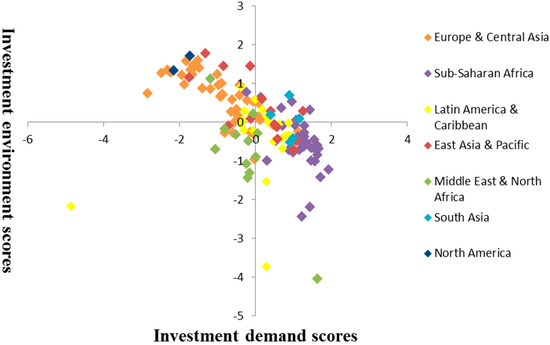 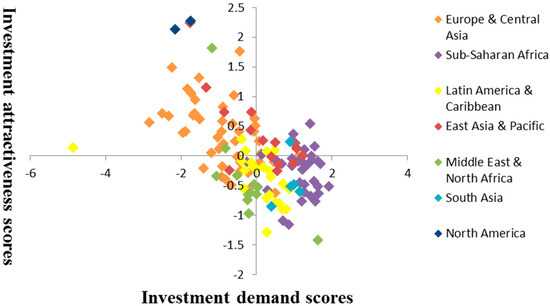 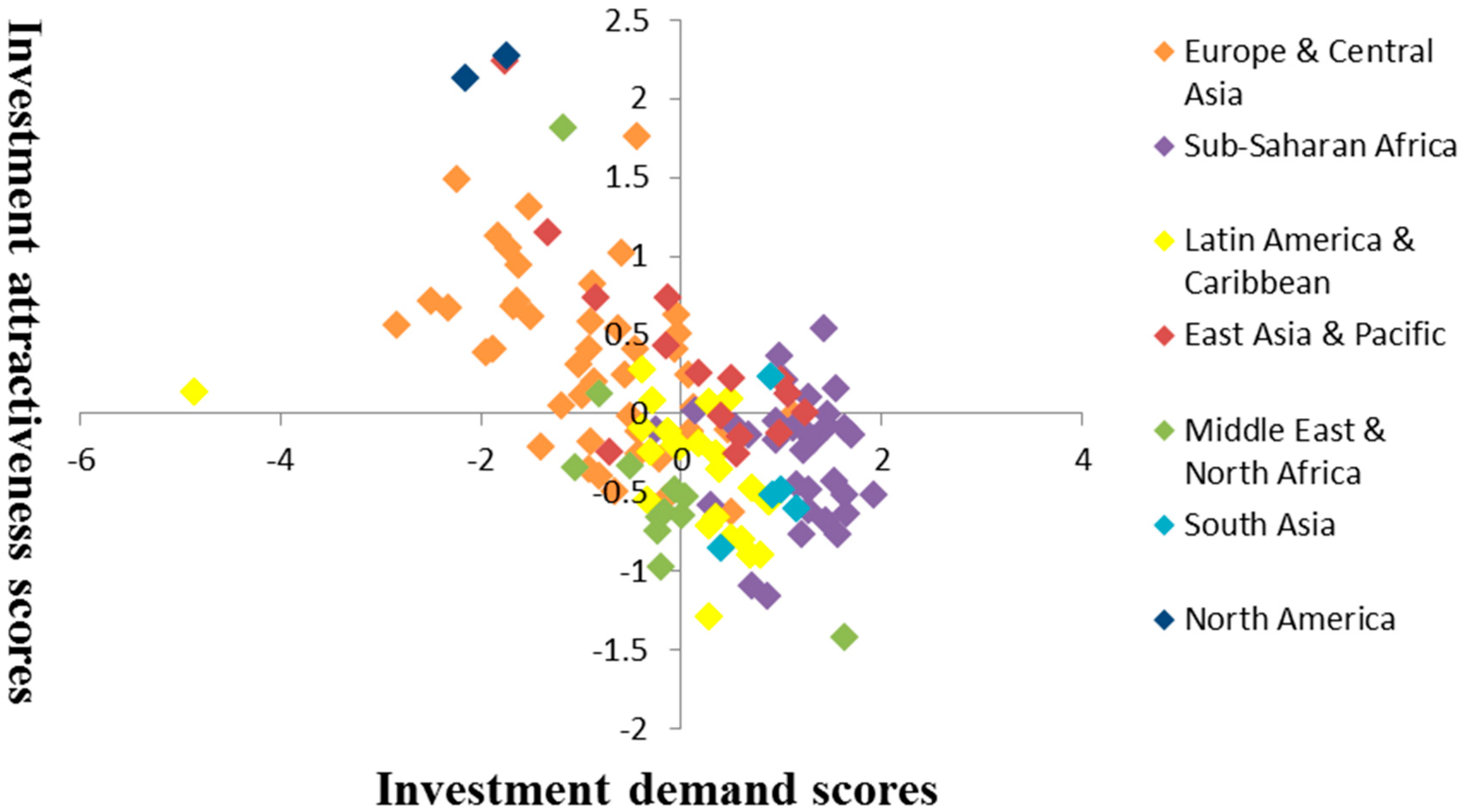 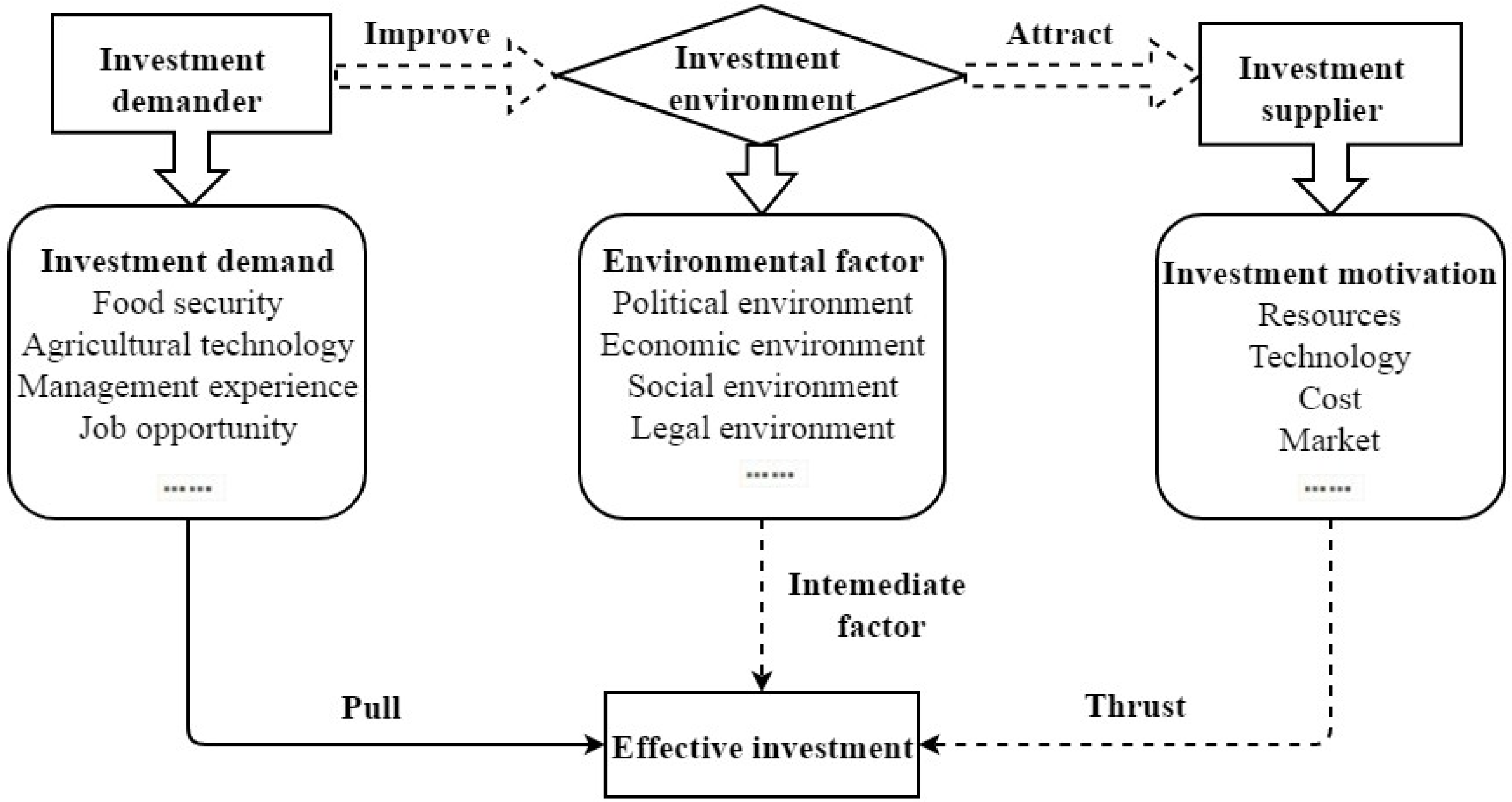