Operational Challenges and Mega Sporting Events Legacy: The Case of BRT Systems in the Global South

3. Conceptual Idea of the Study

This study had undergraduate students (18–23 years old) as participants. They enrolled in King Mongkut’s University of Technology Thonburi (KMUTT), Bangkok, Thailand. In the 2019 academic year, there were 11,858 students. This study employed a simple random sampling method to select participants. The size of the sampling population was calculated based on the Yamane formula [78] with a 96.0% confidence level. The results revealed that 594 participants were at least required. However, in the data collection, questionnaire sheets with consent forms were distributed to 1000 students, and 863 students decided to engage in the survey (86.3% response rate). This research project was also approved by the Research Ethics Committee of the School of Liberal Arts, KMUTT.

A questionnaire was developed and used for data collection. Before using, it was inspected for its validity by measuring its face validity, and the questionnaire was tested with 30 undergraduate students to confirm the reliability of the questionnaire items. The internal consistency of the scales, which were developed for measuring levels of PEK, EA, DEC, GEC and ER, were tested by calculating Cronbach’s alpha. The results of calculation came out that the values of Cronbach’s alpha for each variable were greater than 0.70, thus the items developed for measuring all variables in this study were reliable [79]. All questionnaire items are shown in Table 2.
In measuring environmental knowledge, this study measured participants’ perceived environmental knowledge (subjective knowledge) by employing self-reporting techniques. The five-item PEK scale was developed based on the application of the PEK scale established by Zhu [80]. Zhu’s PEK scale [80] was also used by Pan et al. [81]. For this study, a questionnaire item related to local environmental knowledge was also added.
For measurement of environmental attitude (EA), this study measured EA based on direct self-reporting techniques by applying the new environmental paradigm (NEP) scale [48]. Many previous studies also relied on self-reporting techniques [82] and the NEP scale to measure EA [83]. The NEP scale aims to measure people’s perception of, or belief about, the relationship between humans and the environment [48]. The revised NEP scale contains 15 items. For this study, only six items were selected based on the consideration of students’ capabilities to understand meanings and contexts related to each question. This change ensured the reliability of the collected data.
Regarding environmental concern (EC), EC was divided into domestic environmental concern (DEC) and global environmental concern (GEC). DEC refers to individuals’ concerns about catastrophic environmental problems occurring in Thailand during the past decade. These include PM2.5 concentrations in Bangkok during 2018–2019, shorter winter periods, rising temperatures in Bangkok during the summer season and heavy floods occurring in the northeastern part of Thailand during August and September 2019. GEC refers to individuals’ concerns about environmental problems occurring in other countries or another part of the world. These problems reflect adverse impacts on the world’s macro environmental and ecological systems. These problems include fires in the Amazon rainforest, the death of aquatic animals due to waste in the oceans, rising global average temperatures, a dramatic decline in the polar bear population at the North Pole and sea level rise. For the measurement of DEC and GEC, a five-point Likert scale, ranging from 1 (not at all) to 5 (very much concerned), was developed based on the application of a Gallup Poll environmental concern question [84]. Participants were asked to indicate how concerned they were about relevant environmental events.
In measuring environmental responsibility (ER), this study measured participants’ feelings of moral responsibility towards the environment based on a combination of diverse dimensions including feelings of responsibility to protect the environment, willingness to act environmentally, awareness of negative impacts caused by behaviors, and environmentally-related behaviors. These aspects can reflect individuals’ feeling of moral responsibility [33,85]. A five-point Likert scale with responses ranging from 1 (completely disagree) to 5 (completely agree) was developed based on the application of questions developed by Kaiser and Shimoda [33].

Data collection by questionnaire surveys was carried out during September and October 2019 at King Mongkut’s University of Technology Thonburi in Bangkok, Thailand. All collected data were inspected before being used for statistical analysis. For the data analysis, a path analysis was carried out to test the conceptual model in Figure 1. Undergraduate students’ ER was defined as an endogenous variable that might be influenced by GEC and DEC, which were defined as exogenous variables. Moreover, both GEC and DEC were also defined as endogenous variables that might be influenced by two exogenous variables, including EA and PEK. The variable of EA was also an endogenous variable that might be affected by PEK. The developed path model is illustrated in Figure 1. The evaluation of model fit was performed by calculating these indexes: χ2 test, root mean square error of approximation (RMSEA), comparative fit index (CFI), goodness-of-fit indexes (GFIs), chi square/degree of freedom ratio (CMIN/DF) and incremental fit index (IFI). The evaluation was carried out by using statistical software Analysis of Moment Structure (AMOS) version 21.

5.1. Characteristics of Participants and Variable Scores

The developed conceptual model (see Figure 1) was tested by performing a path analysis using IBM SPSS Amos 21. First, regarding the model assessment, the results suggested that there was no significant direct effect from environmental attitude (EA) on environmental responsibility (ER); therefore, the path from EA to ER was eliminated in order to achieve acceptability of the model. After eliminating the path from EA to ER, the results showed that the overall fit of the model to the data was acceptable (see Figure 2 and Table 5). The value of χ2 was not statistically significant (χ2 = 1.991, df = 1, probability level = 0.158). Therefore, there was a close fit between the model and the observed data. All other indexes presented in Table 4 were also statistically accepted. For example, the GFI value must be greater than 0.90 to indicate a close fit between the data and the proposed model. The results of the model assessment showed an acceptable GFI value of 0.999. The root means square error of approximation (RMSEA) had a value of 0.034, which is less than 0.08; therefore, we can conclude that the model is a reasonable approximation of the data. As suggested by Brown and Cudeck [86], a suitable value of RMSEA that can indicate a reasonable error of approximation, is lower than 0.08. The results also exhibited a statistically acceptable value for the comparative fit index (CFI). The value of CFI is used to indicate the discrepancy function adjusted for sample size. The result of model evaluation showed a CFI value of 0.999, which indicates a close model fit. Hu and Bentler [87] suggested that an acceptable model fit should have a CFI value of 0.90 or larger. Additionally, the incremental fit index (IFI), used to indicate the possibility of having the worst model, had a value of 0.999, which is greater than 0.900, thus indicating the acceptability of the model. Another important index is the CMIN/DF, which indicates how well the data fits the model after dropping one or more paths. The results showed a CMIN/DF value of 1.991, which is considered acceptable [88]. Overall, it can be summarized that the data fits the model, and the proposed model is acceptable after eliminating the path from EA to ER. Since the data fits the model perfectly, this means the use of model for explaining environmental responsibility of general people can be limited.
Table 6 presents the effect of all variables on ER (see Table 6). The results demonstrated a squared multiple correlations value of 0.32. This means approximately 32% of the variance in ER can be accounted for by the linear combination of investigated variables, including PEK, EA, DEC, and GEC. Additionally, the results of the path analysis revealed that the predicted path from PEK and EA to DEC and GEC, and from DEC and GEC to ER, was statistically significant. Among all variables, the standardized direct effect of GEC on ER was the largest at 0.328 (see Table 7). The standardized direct effect of DEC on ER was 0.181. The predicted path from PEK to EA was also statistically significant, and the standardized direct effect was very small at 0.087. The predicted path from PEK to DEC was statistically significant, and the standardized direct effect was 0.271. The predicted path from PEK to GEC was statistically significant, and the standardized direct effect was 0.076. The effect of DEC on GEC was the strongest (0.618), compared to all paths. Additionally, both DEC and GEC mediated the effect of EA on ER, and the effect of PEK on ER. Most importantly, GEC mediated the effect of DEC on ER.
In total, it can be concluded that GEC had the highest direct effect on ER, followed by PEK and DEC, respectively. EA had no direct effect on ER. PEK was found to be important as it had a strong direct effect on ER, and it also had indirect effects on ER through DEC, GEC and EA (see Table 7).

7. Limitations of the Study

P.J. conceived the idea of the study. Both P.J. and S.C. carried out data collection and data analysis. All authors have read and agreed to the published version of the manuscript.

The research was financially supported by the School of Liberal Arts, King Mongkut’s University of Technology Thonburi. The funding number is 2563201. Furthermore, I would like to thank all students who participated in the questionnaire surveys. Publishing is supported by the Research, Innovation, and Partnerships Offices, King Monkut’s University of Technology Thonburi, Thailand. 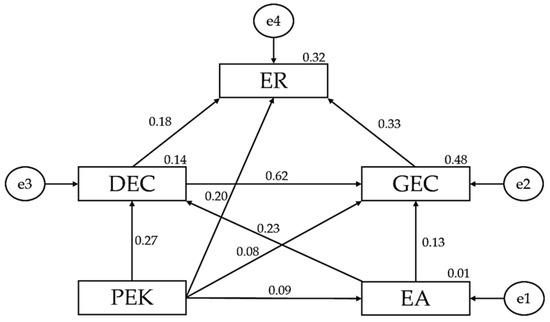 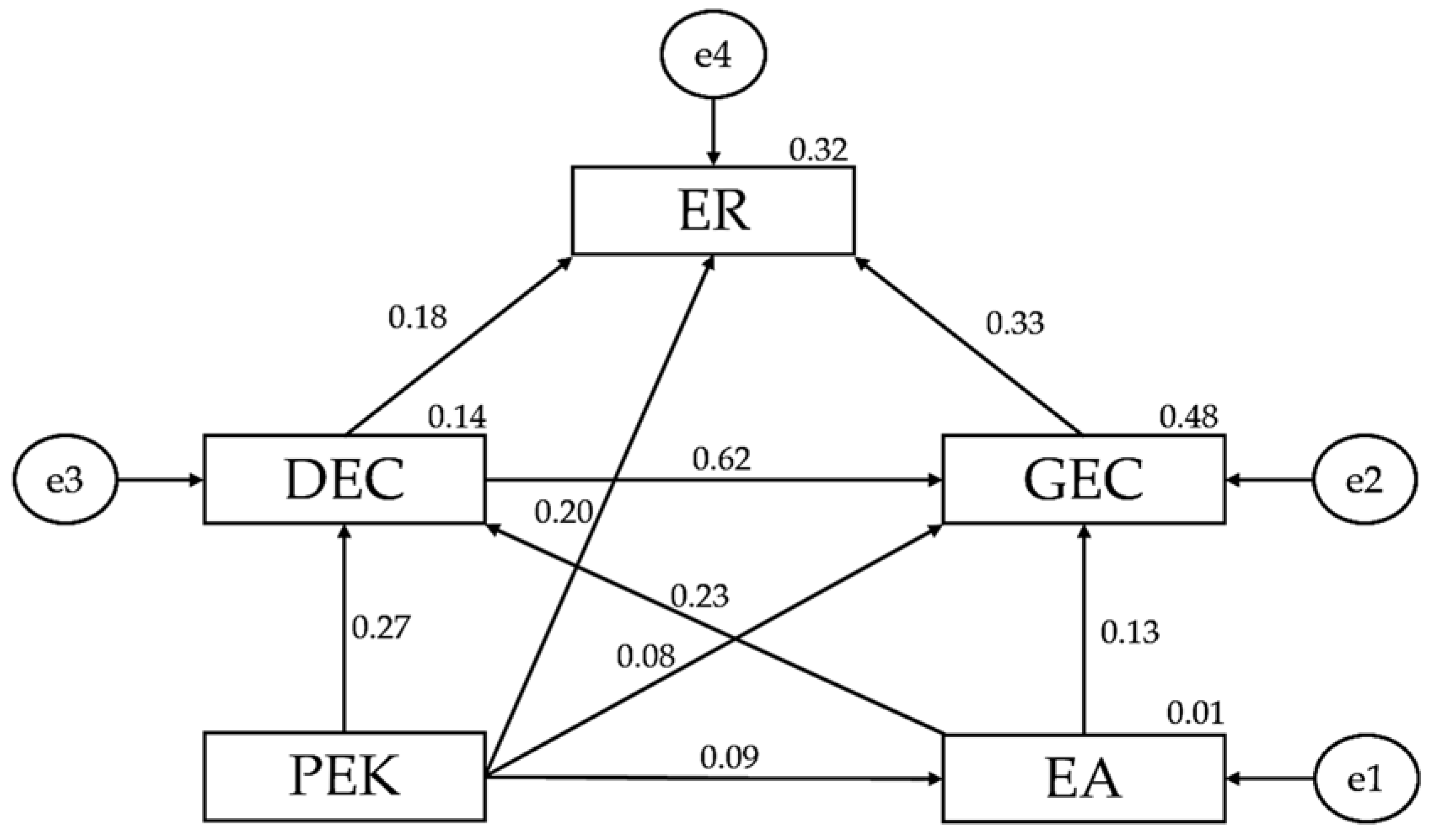