The Lan–Xi (LX) urban agglomeration is in the upper reaches of the Yellow River, at the intersection of the Loess Plateau and the Qinghai–Tibet Plateau and the three natural areas. The special geographical location and natural conditions have formed a distinctive transitional geographical and ecological pattern from west to east. The LX urban agglomeration is an important inter-provincial urban agglomeration in Western China, with relatively dense populations and towns. In 2018, the total population of the region was 11,890,300; the population density was 122 people per km2, which was much higher than the average of the Gansu and Qinghai provinces and the western region; and the region primarily includes 39 counties, with a total area of 97,500 km2. According to the scale structure, the city is divided into central cities, regional central cities, node cities, and small and medium-sized cities (Figure 1). The level of urbanization in the LX urban agglomeration is generally low, with large spatial differences. The urbanization rate increased from 27.83% in 2000 to 61.24% in 2018—slightly higher than the national average of 59.58%. However, with rapid economic development and the continuous acceleration of urbanization, resource and environmental constraints are also increasingly intensified.

The principal data used in this study consisted of the following types and came from several sources (Table 1): (1) Land use data for 2010 and 2018 were obtained from the Resource and Environment data center of the Chinese Academy of Sciences (Resolution 30m, http://www.resdc.CN). (2) Meteorological data were obtained from the China Meteorological Science Data Sharing Service Network; daily data such as temperature, precipitation, relative humidity, wind speed, and sunshine duration were the average of the three years before and after the study period. (3) Soil data were obtained from the World Soil Database (Resolution 1000m, http://www.fao.org/). (4) The digital elevation model (DEM) was downloaded from the United States Geological Survey (USGS) website (ASTER GDEM Resolution 30 m, https://www.usgs.gov/). (5) The economic and social statistical data for 2010 and 2018 were obtained from the Statistical Yearbook of Gansu Province and the Statistical Yearbook of Qinghai Province. After considering land use and the night light index, the population density and GDP density data were downscaled to a 100 × 100 m grid by interpolation. CGCS2000 coordinates were used for spatial data with a resolution of 100 m.

Current ES accounting methods primarily include the value equivalent, the NPP (Net Primary Productivity) quantitative index, and the model calculation methods. In comparison, the InVEST model overcomes the unintuitive problem caused by the abstract expression of text and can visualize the evaluation result space. Therefore, the InVEST model—comprising a set of models—is recognized by most scholars and is widely used to evaluate the ESs of the LX urban agglomeration. Four sub-modules of water yield, sediment delivery ratio, nutrient delivery ratio, and carbon storage and sequestration were chosen for this study to evaluate various ESs. Owing to space limitations, the calculation method of each module is shown in reference [51].

Urbanization is a complex system that includes historical processes of social productivity development, technological progress, and industrial structure adjustment [52,53,54]. Urbanization reflects changes in multiple systems, such as regional population, economy, society, and environment [55]. Based on the research results of the level of recent urbanization development and the development characteristics and data availability of the study area, this study chose population density, economic density, and proportion of construction land to comprehensively measure the level of urbanization from the perspective of population, economic, and land urbanization. On this basis, the range standardization method was used to standardize the abovementioned indicators on the grid scale, and the comprehensive urbanization level index was obtained by equal weight weighted calculation. The formula is as follows: where is the original value of the urbanization index i and grid j, and is the normalized value of . and are the maximum and minimum values of the urbanization index i in the study area, respectively.

From 2010 to 2018, all types of ESs in the LX urban agglomeration showed an upward trend (Table 2). Among them, sediment retention and amount of carbon stored experienced the largest (151.56%) and smallest (5.82%) increases, respectively. Water yield and nutrient purification increased by more than 15%.
The overall distribution pattern of the four types of ESs in the LX urban agglomeration in 2018 was consistent with that of 2010, but the spatial distribution of various services was significantly different (Figure 2). Of these, water yield was higher in the southwest and lower in the east. High-value areas were primarily concentrated in the Qinghai–Tibet Plateau in the southwestern portion of the LX urban agglomeration, such as in Guinan, Gonghe, Jianzha, Tongren, and other counties. The region has good natural background conditions, high vegetation coverage, and abundant rainfall. The maximum water yields per unit area in 2010 and 2018 were 487.28 and 828.41 mm/ha, respectively. The overall soil retention was higher in the central part and lower in the east and west. In comparison, the amount of sediment retention per unit area was much greater in 2018 than in 2010; this was closely related to the continued advancement of returning farmland to forest, returning grazing to grassland, and other ecological protection and restoration projects. Nutrient purification was consistent with the farmland distribution pattern, trending high in the southeast and low in other regions. In the southeast (i.e., Weiyuan County, Longxi County, and Lintao County), the proportion of farmland was relatively large, the natural background conditions were ordinary, and agricultural non-point-source pollution was relatively large, resulting in a large amount of nutrient purification of 17.67 kg/ha/year from 2010 to 2018. The spatial distribution pattern of high-value carbon stored areas was consistent with the distribution of forestland, and the maximum carbon stored per unit area was 430 t/ha.
The ESs of central regional towns were the least affected by rapid urbanization, and the ESs of node towns were relatively low. In comparison, the levels of urbanization in small and medium towns were not high, but the ESs were relatively high.

4.1. The ESs of the LX Urban Agglomeration Gradually Improved

Overall, ESs in the LX urban agglomeration grew, although the region experienced rapid and intense urbanization from 2010 to 2018. The improved ESs were consistent with those from the China Ecosystem Assessment at the national scale [56] and from other studies [57]. Such improvement, similar to that at the national scale, may be primarily attributed to national conservation policies started in 2000, which effectively alleviated ecological deterioration [54,56].

4.2. The Regional Spatial Heterogeneity of Urbanization Level was More Significant in the LX Urban Agglomeration

4.3. The Relationship between Urbanization and ESs

The relationship between urbanization and ecosystem services has received widespread attention in recent years [58]. Many studies have shown that urbanization causes a decline in the ecological environment [49] and ESs [14,60] and affects the landscape patterns of urban space, which then influences ESs [61]. The results of this study also confirm this. There was a significant negative spatial correlation between the urbanization level of the LX urban agglomeration and the integrated ESs. The global bivariate Moran’s I index values in 2010 and 2018 were −0.082 and −0.90, respectively. The increase in absolute value indicates that the spatial difference between the two gradually increased. The rapid progress of urbanization in the LX urban agglomeration has brought rapid economic and population growth and sharply increased demand for housing, transportation, and public service facilities in urbanized areas, and the rapid development of industrial structure and non-agricultural development has led to changes in land use. The conversion of forest land, grassland, and farmland with many ESs into construction land with few ESs has seriously affected the supply capacity of ESs in the region. The impact of urbanization depends on the type of ES. Specifically, the level of urbanization has a significant negative spatial correlation with water yield, sediment retention, and carbon storage but a positive spatial correlation with nutrient purification, which indicates that the improvement of the urbanization level of the LX urban agglomeration has promoted an increase in nutrient purification in the region; this is contrary to the conclusions obtained by other scholars in the central and eastern urban agglomeration [50,54] because the InVEST nutrient purification module is primarily used to evaluate the purification function of nitrogen and phosphorus nutrients in the ecosystem. The amount of nutrient purification depends on the pollutant load and the retention rate of nitrogen and phosphorus. Point-source pollutants, such as industrial wastewater and sewage treatment plants, and agricultural non-point-source pollutants are the primary sources of nitrogen and phosphorus. On the one hand, the amount of urban sewage discharge increased significantly during the process of urbanization, resulting in a significant increase in pollutant load. On the other hand, with increased levels of urbanization, awareness among the residents regarding ecological and environmental protection and the technical means of ecological environmental governance have improved. This partially promotes the maintenance of nitrogen and phosphorus by plants and microorganisms.

This study superseded administrative boundaries and explored the spatial–temporal distribution pattern of ESs and urbanization in the LX urban agglomeration in the transition zone of three natural regions based on grid and regional scales to reveal the temporal and spatial interaction relationship between ESs and urbanization. However, due to research data limitations, the urbanization development level measured by population, economy, and land using 2010 and 2018 as the time node may not be comprehensive. Future research should fully utilize the advantages of modern information technology, such as big data, and consider cultural, social, and other factors to build a long-term database and to clarify the dynamic evolution of the spatial interaction between ESs and urbanization to allow more in-depth research. Additionally, we only considered four types of ESs and excluded others, such as cultural services. The beautiful scenery and invaluable cultural heritage of the study area form an important national and international tourist destination in China, and the development of tourism influences ecosystem services [62]. Cultural ESs needs to be considered in future research. 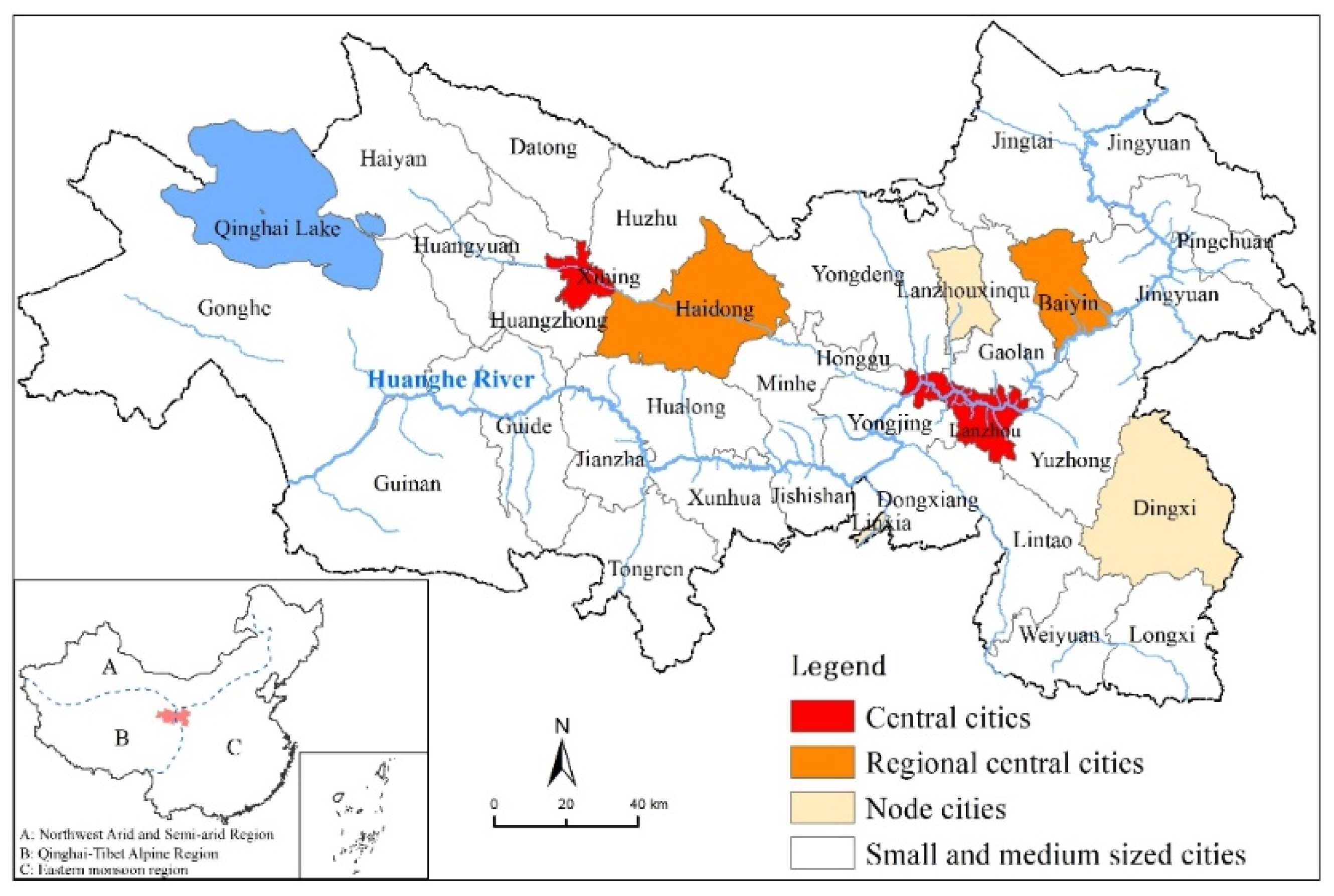 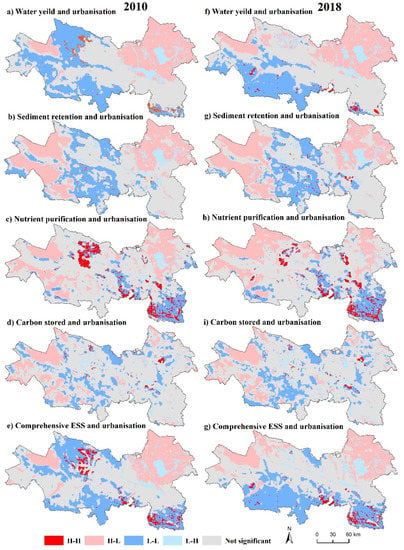 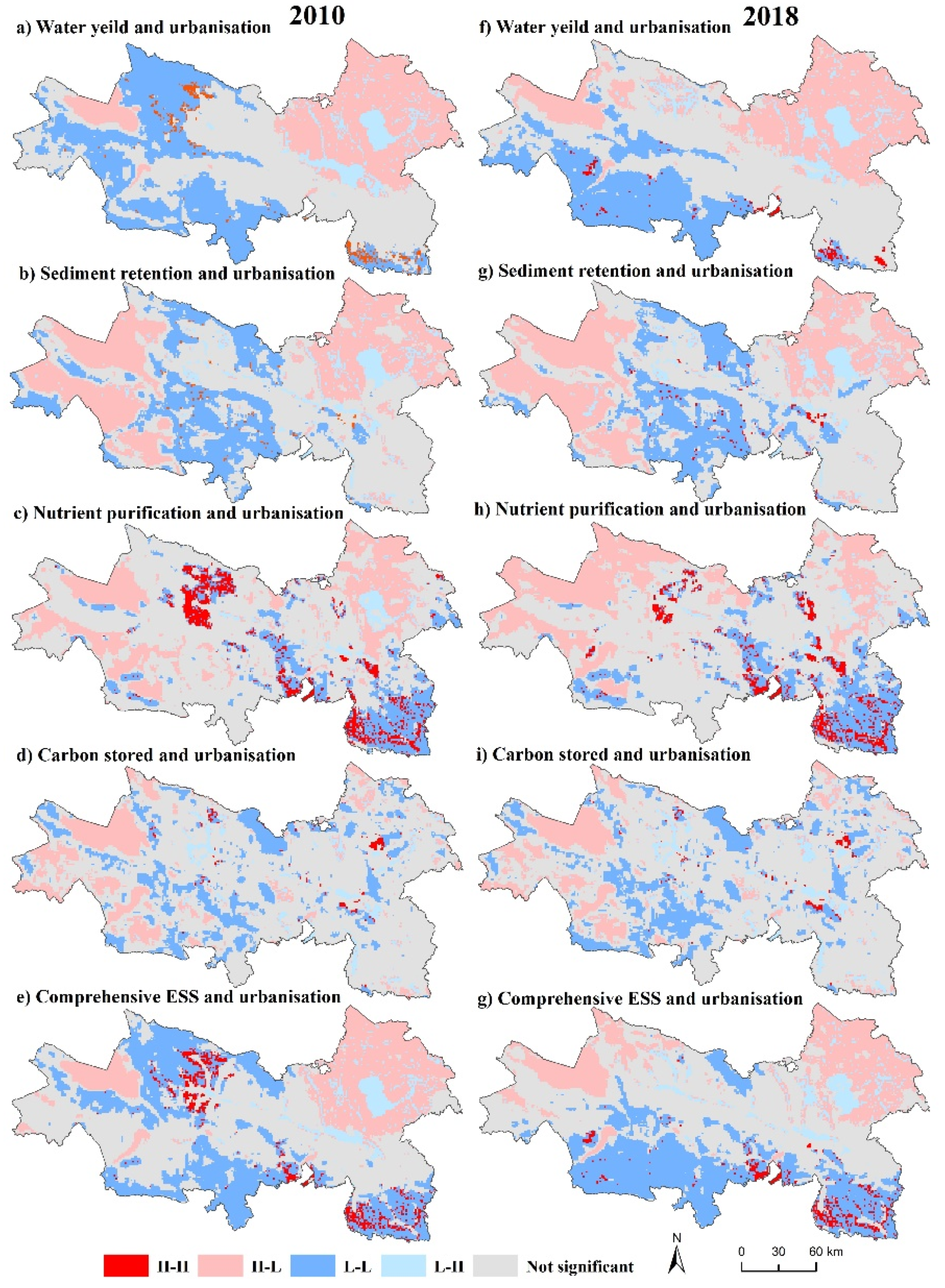