Development of Flood Risk and Hazard Maps for the Lower Course of the Siret River, Romania

The Siret River is one of the most important tributaries of the Danube River in the Romanian territory. With a total length of 596 km in this territory, the confluence section of the Siret River with the Danube represents an area where major floods have occurred over time. In the last 50 years, over 20 floods have been recorded in the lower area of the Siret River; and the most recent important flood, which happened in 2010, had a negative impact on the local population, the environment, and the economy. Although it is a buffer zone, the Danube River has a significant impact on the discharge rate of the Siret River. Since few studies have been conducted on the prediction of flooding in the lower area of the Siret River, the present study aims at presenting the most important steps to be taken for designing risk and hazard maps for floods, which could be further applied to other rivers. The confluence of the Siret River with the Danube, a distance of 35 km upstream, was chosen as a study area. Techniques of topographic and bathymetric measurements were combined in order to design the risk and hazard maps for floods in this area and to improve the digital terrain model of the minor riverbed for the studied river area. The 1D hydrodynamic model of the HEC-RAS software was used in this research for developing the flood risk and flood hazard maps. The hazard and risk maps were generated based on 10%, 5%, and 1% flood scenarios, which are in accordance with Floods Directive 2007/60/EC; no historical data were available for the 0.1% scenarios. Thus, in a flood scenario that can occur every 100 years, about 9500 inhabitants are vulnerable at a medium flood risk. In this scenario, over 19.5 km of road infrastructure, about 16.5 km of railways, eight cultural heritage indicators, and three environmental indicators may be affected. View Full-Text
Keywords: Siret River; flood risk; HEC-RAS modeling; flood map; hazard map Siret River; flood risk; HEC-RAS modeling; flood map; hazard map
►▼ Show Figures 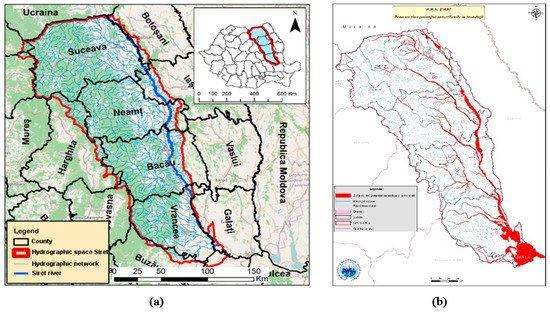