Online Learning Tools in the Era of m-Learning: Utility and Attitudes in Accounting College Students
Previous Article in Special Issue

Study on the Certification Policy of Zero-Energy Buildings in Korea

This study presents a methodology and process to establish a mandatory policy of zero-energy buildings (ZEBs) in Korea. To determine the mandatory level to acquire the rating of a ZEB in Korea, this study was conducted under the assumption that the criteria of ZEB was a top 5% building considering the building’s energy-efficiency rating, which was certified through a quantitative building energy analysis. A self-sufficiency rate was also proposed to strengthen the passive standard of the buildings as well as to encourage new and renewable energy production. Accordingly, zero-energy buildings (ZEBs) in Korea are defined as having 60 kWh/(m2·yr) of non-renewable primary energy (NRPE) consumption in residential buildings and 80 kWh/(m2·yr) in non-residential buildings, and the self-reliance rate should be more than 20% of the renewable energy consumption as compared to the total energy consumption of the buildings. In addition, the mandatory installation of building energy management systems (BEMS) was promoted to investigate the energy behavior in buildings to be certified as zero-energy in the future. This study also investigated the number of ZEB certificates during the demonstration period from 2017 to 2019 to analyze the energy demand, non-renewable primary energy, renewable primary energy, and self-sufficiency rate as compared to those under the previous standards. For ZEB Grade 1 as compared to the existing building energy-efficiency rating, the sum of the NRPE decreased more than 50%, and renewable energy consumption increased more than four times. View Full-Text
Keywords: zero-energy building (ZEB), building energy policy; self-sufficiency rate; certification criteria of ZEBs zero-energy building (ZEB), building energy policy; self-sufficiency rate; certification criteria of ZEBs
►▼ Show Figures 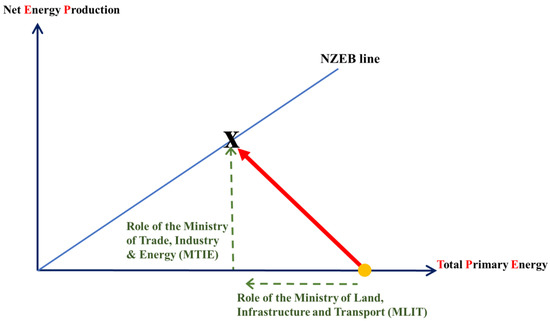