Exploring the Changing Gap of Residential Energy Consumption per Capita in China and the Netherlands: A Comparative Analysis of Driving Forces
Previous Article in Special Issue

This paper aims to propose a conceptual model that synthesizes the existing findings concerning universities as culture change agents for sustainable development. The model could serve as a guidance on how universities might get involved in the pro-SD activities. It also underlines the prerequisite of the quality culture that should be introduced within all the activities of universities to successfully act as culture change agents for SD. This paper builds upon the holistic and inter-disciplinary approach to demonstrate that SD does not happen in isolation and that the role of universities in its creation is significant. This study includes a literature review to contextualize the impact of universities on culture and their potential role in SD. The conclusions stemming from the literature review materialize in the proposal of the conceptual model of the university as the culture change agent for SD. The elaborated framework responds to the need for greater clarity, ordering and systematization of the role of universities in the processes of initiating, promoting and modelling the SD-oriented changes while appreciating the role of culture as an enabler, means of social change and a result of SD-focused interventions. The paper contributes to the body of knowledge by offering a novel perspective on the assumed interrelations between university, its quality culture, university main operations such as education, research and engagement with the society as well as the culture and the agency of stakeholders in the context of meeting the world’s current demands without compromising the needs of future generations. View Full-Text
Keywords: universities; culture; sustainable development; quality culture; change agent; model universities; culture; sustainable development; quality culture; change agent; model
►▼ Show Figures 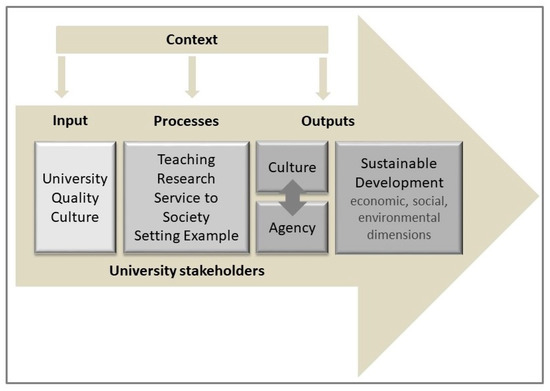