Numerical Study of a Francis Turbine over Wide Operating Range: Some Practical Aspects of Verification

:
Hydropower plays an essential role in maintaining energy flexibility. Modern designs focus on sustainability and robustness using different numerical tools. Automatic optimization of the turbines is widely used, including low, mini and micro head turbines. The numerical techniques are not always foolproof in the absence of experimental data, and hence accurate verification is a key component of automatic optimization processes. This work aims to investigate the newly designed Francis runner for flexible operation. Unsteady simulations at 80 operating points of the turbine were conducted. The numerical model consisted of 16 million nodes of hexahedral mesh. A SAS-SST (scale adaptive simulation-shear stress transport) model was enabled for resolving/modeling the turbulent flow. The selected time-step size was equivalent to one-degree angular rotation of the runner. Global parameters, such as efficiency, torque, head and flow rate were considered for proper verification and validation. (1) A complete hill diagram of the turbine was prepared and verified with the reference case. (2) The relative error in hydraulic efficiency was computed and the over trend was studied. This allowed us to investigate the consistency of the numerical model under extreme operating conditions, far away from the best efficiency point. (3) Unsteady fluctuations of runner output torque were studied to identify unstable regions and magnitude of torque oscillations.
Keywords:
cfd; energy; Francis turbine; hydropower; verification

Flexibility of power generation is an important requirement for future turbine designs. The turbines need to operate outside the guaranteed region with more start–stop cycles and high-ramping rates. However, power generation at off-design load brings specific challenges, such as high-amplitude pressure pulsations, vortex breakdown, cavitation etc. Present day variable-speed operation of a hydro turbine is considered as an alternative option to meet fluctuating energy demand, as it allows a high-ramping rate. New design approaches are focusing on design optimization for the variable-speed operation including high, medium, low, mini and micro head turbines [1,2,3]. Furthermore, mini and micro hydro stations are good options for smart grid configurations. This will enable local flexibility of energy need and sustainability. One of the challenges for the very low head turbines is the lower efficiency. However, modern design approach and automatic optimization with proper verification will certainly be useful for improving the efficiency of very low head turbines.
Modern algorithms and tools allow designers to perform optimization with reduced effort. Numerical methods have played significant roles in design and development of hydro turbines over the last 50 years [4]. Presently, almost all turbine designs and the optimization are highly dependent on the numerical outcome. High quality results and the accurate prediction of physical phenomena are always a valuable input for the turbine designers. During the past few years, several verification approaches have been developed to quantify the numerical errors [5,6,7]. However, these approaches have certain limitations and require a customized solution for hydro turbines. The present work is the continuation of previous efforts initiated to study the practical aspects of accurate verification and validation of turbine simulations. During 2009–2014, the focus was the Francis-99 test case [8,9]. The reviewed parameters were passage modeling, component modeling (runner and draft tube separately), influence of boundary conditions, discretization techniques, turbulence models and time step sizes. Later (2014–2016), the work extended to other hydro turbines, and the data of several turbines were compiled [10]. The analysis underlined that the hybrid models with newly developed techniques of passage modeling (blade row) are able to predict turbine flow with reasonable accuracy. The gain in simulation speed is high; however, the accuracy related to flow periodicity, variable torque from each blade channel and flow asymmetry at runner outlet is expected to worsen, due to the assumption of periodical boundary type. This may be a compromise solution for the industry standard modeling of hydro turbines. The work also covered the fluid structure interactions and related numerical errors in hydro turbines [11,12]. Recently [13,14,15], a comprehensive study (including the compressibility effect) was conducted to develop a systematic verification and validation guide for the turbines. The conclusion was that more comprehensive study is needed to determine the precise trend and fit (systematic/random behavior) of numerical errors. In this paper, we focus on the complete hill diagram of a Francis turbine that allows credible quantification of numerical errors at several operating points and helps to investigate the systematic or random behavior of errors.

A newly designed and optimized Francis runner was used for the verification and validation study, hereafter referred to as a HydroFlex runner. The specific speed (—see IEC 60193:1999-11, sub clause 1.3.3.12.11) of the turbine is 0.027. The runner is designed for flexible operations. Other components of the turbine, except for the runner, are the same as the Francis-99 runner [9]. The modeled turbine includes spiral casing with 14 stay vanes, 28 guide vanes, a runner with 17 blades and the elbow type draft tube. Detailed description of the test facility is presented in a previous publication [16]. Table 1 describes the boundary conditions and the numerical parameters enabled for the simulations. Figure 1 shows the geometry of the runner and the hexahedral mesh. The complete turbine includes around 16 million nodes (around four node points per cubic millimeter volume). Unsteady simulations at operating points (a total of 80 flow rate and speed combinations) were conducted.

The present work focused on the numerical study of a newly designed Francis runner with a specific emphasis on verification. For many situations, especially automatic optimization, experimental data are not available to validate the numerical results. In such cases, relative verification is important with the reference case. For this work, we considered the Francis-99 runner as a reference case and optimized the new runner, HydroFlex, for flexible operations. The best efficiency point of the HydroFlex runner was maintained at the same location as the Francis-99 runner. The final optimized geometry of the HydroFlex runner was considered for the hill diagram simulations. The overall trend of efficiency variation across the and values was found to be identical. This indicated that the numerical model performs consistently over the turbine operating range. However, the efficiency is a combination of several quantities, such as head, flow rate and torque, which can be misleading due to arithmetic cancellation of errors in these quantities. It is also important to examine the individual quantity, mainly torque, and its unsteady behavior over the hill diagram points. This will allow us to identify unstable regions. Only low frequency torque fluctuations exhibited at the 40% guide vane opening and (see Figure 6b) were almost 100 times that of the best efficiency point. On the other hand, torque fluctuations at all other points were of high frequency. When examining the characteristics of torque closely, a quite interesting signature was observed along the synchronous speed line of the turbine (). It would be interesting to see a similar signature from the experiments in the future and validate the numerical results. Overall, investigations of unsteady torque fluctuations, in addition to efficiency, were found to be useful during the runner optimization process and the identification of the stable regions of turbine operation or the need for further optimization.
It is important to note that the simulations were unsteady, and that the computational domains carry 16 million nodes. For industry-scale simulations, such simulations may be expensive and time consuming. However, it will be worth to check a few operating conditions, especially along the synchronous speed, with unsteady simulations and scale-resolving models. This will help to identify the torque characteristics. The authors are also of the opinion that the appropriate method for one particular application depends on the expectations of the designer and available computational resources. The authors tend to favor hybrid models evolving continuously from the RANS (Reynolds-averaged Navier–Stokes) to the LES (large eddy simulation) mode. These models allow us to characterize the inter-blade vortices in the blade channels and vortex breakdown in the draft tube. Perhaps, the time has come to use a fully customized approach—a combination of steady RANS, unsteady RANS, SAS-SST, SBES (stress blended eddy simulation) and RANS-LES for selected points of the hill diagram.
Supplementary data of flow parameters for both runners are provided in the Appendix A.

This project has received funding from the European Union’s Horizon 2020 “Secure, Clean and Efficient Energy” program, H2020-LCE-07-2016-2017, under grant agreement no 764011. Project: Increasing the value of hydropower through increased flexibility — HydroFlex (www.h2020hydroflex.eu). The computational resources are used under the Notur/Norstore project (number nn9504k)—Numerical investigations of a Francis turbine.

The authors declare no conflict of interest and the funders had no role in the design of the study in the collection, analyses, or interpretation of data, in the writing of the manuscript, or in the decision to publish the results. 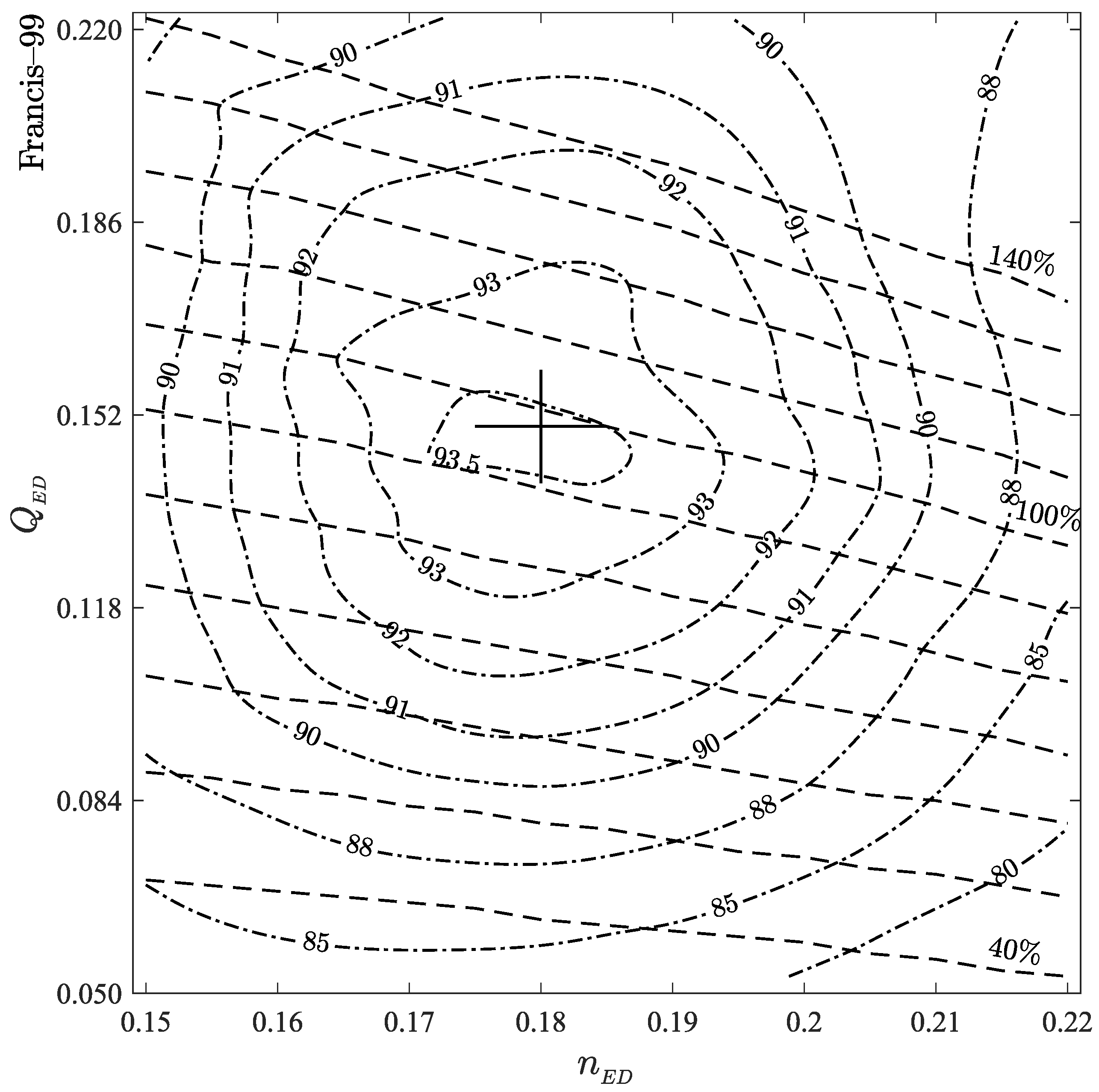 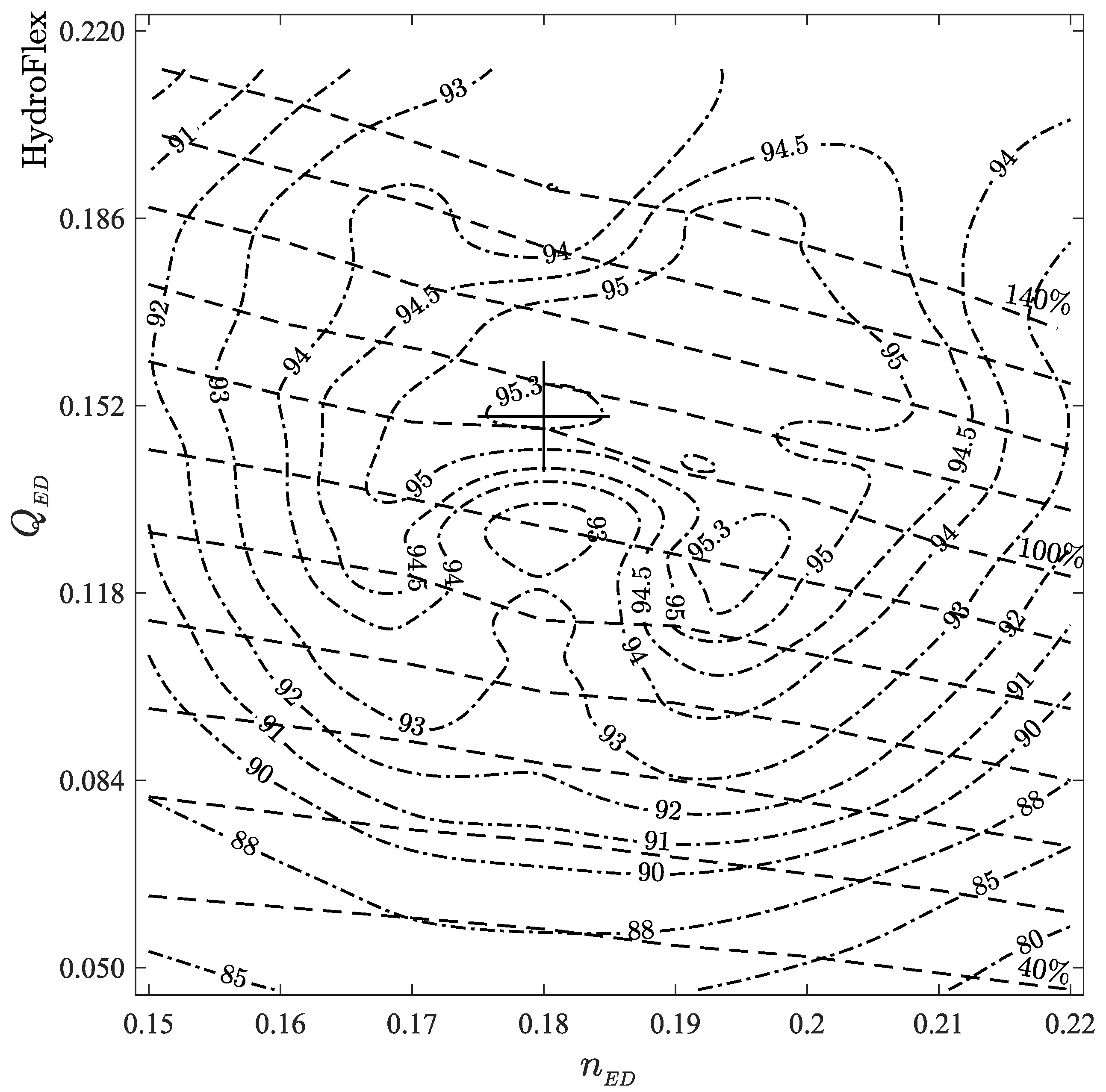 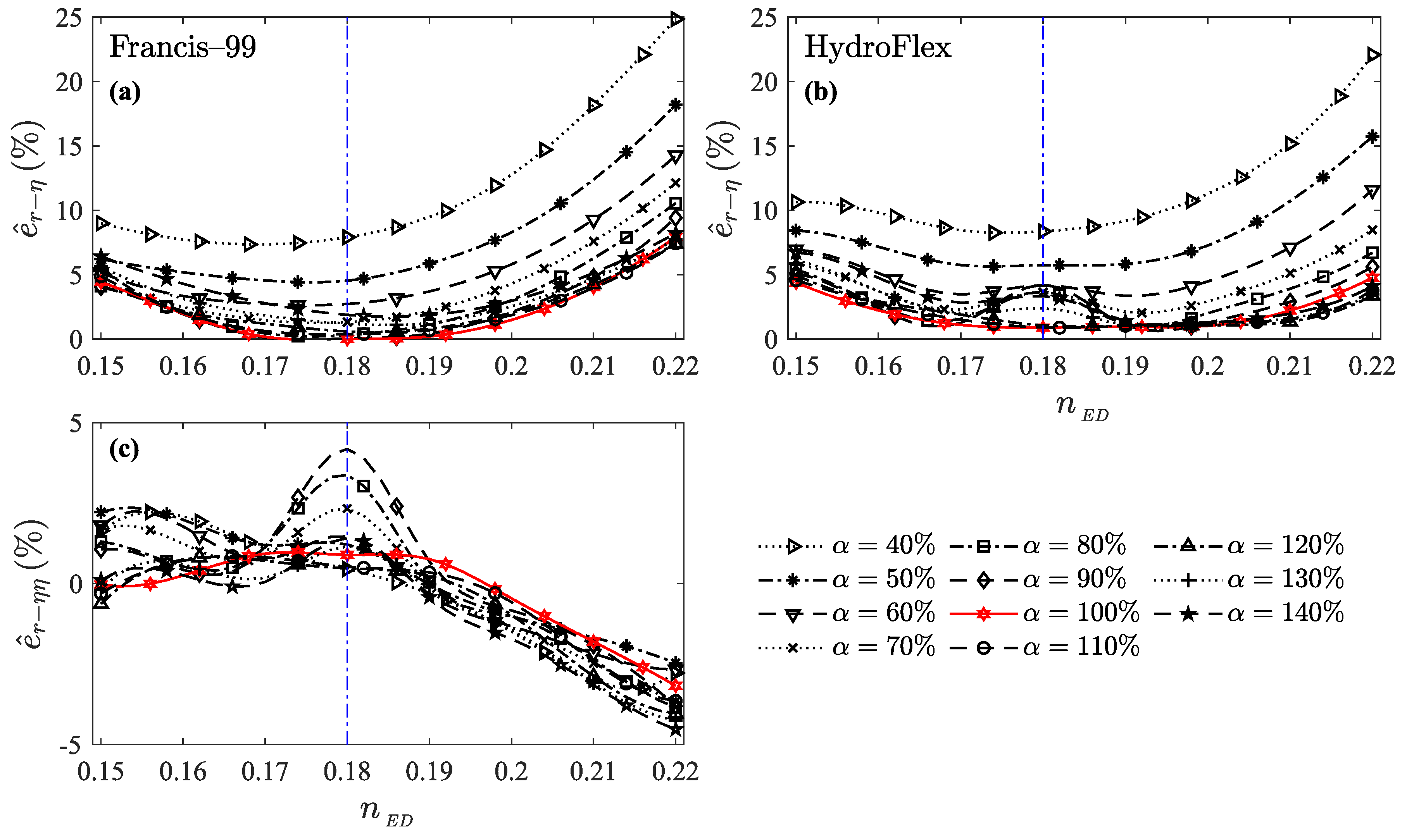