COVID-19: A Relook at Healthcare Systems and Aged Populations

Assessment of the diversity of reproductive traits and genetic variation is of great relevance to the conservation of genetic resources and management of silver fir (Abies alba) populations. We have evaluated reproductive characteristics associated with female cones and seed morphology, as well as seed germination after subjecting seeds to five storage methods, in nine Romanian populations of A. alba. The genetic diversity of the populations was assessed with 12 polymorphic simple sequence repeat (SSR) markers. We detected significant differences between populations for all reproductive traits and considerable differences in seed germination and storage methods; seed storage in wet sand was the method resulting in the highest germination in all populations. Genomic SSRs (gSSRs) were more informative on average than expressed sequence tag SSRs (EST-SSRs) in the populations studied. The nine populations were genetically diverse, with an average number of alleles (N) per SSR locus between 3.50 and 4.83. The observed heterozygosity (Ho) in the nine populations was always lower than the expected heterozygosity (He), which resulted in values of the inbreeding coefficient (Fis) between 0.261 and 0.709. Genetic distances between populations ranged between 0.077 and 0.410. The cluster analysis based on genetic distances did not group accessions according to their geographical proximity, and despite a positive trend, the correlation between geographic and genetic distances was non-significant. The results of an analysis of molecular variance (AMOVA) revealed that only 9.1% of the total molecular variance is attributable to differences between populations. This low degree of genetic differentiation between populations is confirmed by the intermingling of individuals of different populations in a principal coordinate analysis (PCoA). We found evidence of a positive relationship between He and germination, as well as a negative one between Fis and germination, suggesting that populations with low diversity and high consanguinity may have a reduced fitness and long-term viability. The results are relevant for the conservation and management of local genetic resources and populations, as well as for reforestation programmes of silver fir. View Full-Text
Keywords: silver fir; Abies alba; germination; SSRs; genetic diversity; inbreeding silver fir; Abies alba; germination; SSRs; genetic diversity; inbreeding
►▼ Show Figures 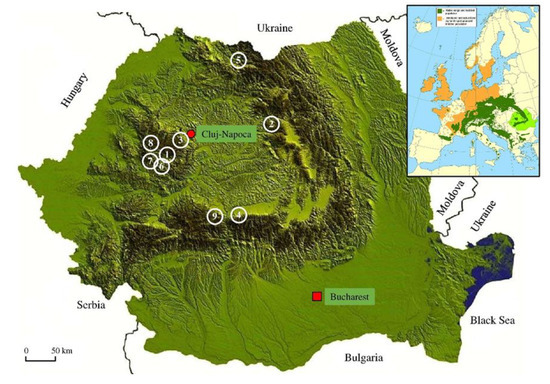