For Sustainable Benefits and Legacies of Mega-Events: A Case Study of the 2018 PyeongChang Winter Olympics from the Perspective of the Volunteer Co-Creators
Previous Article in Special Issue

Municipal Social Responsibility of Statutory Cities in the Czech Republic

“Omerta” in Organized Sport: Bullying and Harassment as Determinants of Threats of Social Sustainability at the Individual Level

The interpretation of the evolutionary theory prevailing in sport, based on the approach that the strongest survive, varies with the rules inherent in the criminal world, forbidding to “take out” negative information about interrelationships, in this case, outside the team or group. Such traditionally established culture puts pressure on athletes to suffer from bullying and follow the “silence law”. In the long run, this turns into a precondition for unsafe environment for athletes, which, due to negative consequences for the individual, can be identified as threats to social sustainability at the individual level. Such a situation is also indirectly approved by the heads and coaches of organizations. The latter, who lack competencies to resolve conflict situations, are left to solve arising problems on their own and do not receive any support from the management of organizations. Therefore, the aim of this research is to reveal the factors determining the specificity, emergence, and development of bullying and harassment in sport as threats to social sustainability at the individual level. The research was conducted using a semi-structured interview method with eight coaches representing team, individual, and duel sport branches. Inductive content analysis served as the basis for the data analysis. Research results disclosed factors determining the specificity of emergence of bullying and harassment in sport and hindering the entrenchment of social sustainability in sport at the individual level. The results revealed the euphemisms distinguished by coaches, which, in sport, have a positive connotation, such as “combativeness” and “sports anger” instead of the term “aggression”. It was identified that coaches named aggressors as “harder players”, “confident players”, “active persons”, “players-torpedoes”, “emotional players”, and “competitive players”. Sports competition is justified in various forms. The emergence of bullying and harassment is grounded on “mastery differences”, it is stated that abusive actions are experienced by “physically weak” players, while physical actions used by athletes are called “mischief”; verbal actions are “raillery”. In addition, inadequate preparation of Lithuanian coaches to respond to bullying and harassment in their trained teams or groups on time and appropriately was identified. It turned out that sports organizations are not particularly interested in organizing trainings for prevention of destructive interrelations and intervention. Such kind of in-service training is left to the coach’s initiative. View Full-Text
Keywords: sport; social sustainability; athletes; coaches; violence; bullying; harassment; omerta sport; social sustainability; athletes; coaches; violence; bullying; harassment; omerta
►▼ Show Figures 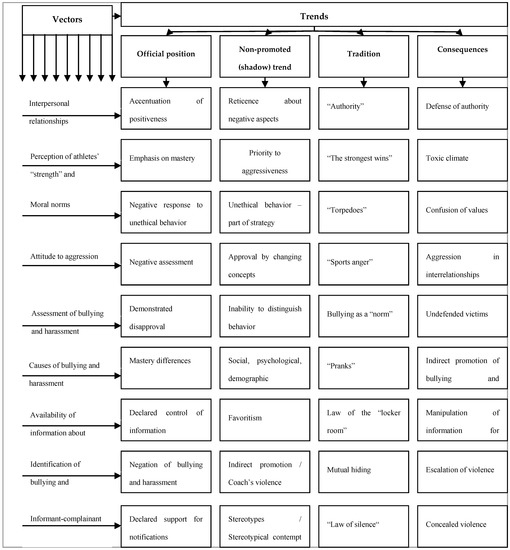 
Vveinhardt, Jolita; Fominiene, Vilija B.; Andriukaitiene, Regina. 2019. "“Omerta” in Organized Sport: Bullying and Harassment as Determinants of Threats of Social Sustainability at the Individual Level." Sustainability 11, no. 9: 2474.