Analysis of the Driving Forces of Urban Expansion Based on a Modified Logistic Regression Model: A Case Study of Wuhan City, Central China

Urban development policies and planning schemes are essential drivers of urban expansion in the contemporary world. However, they are usually investigated by qualitative analysis and it is difficult to use them in spatial analysis models. Within the advancement of technology regarding the geostatistical dataset, this study uses a field strength model to quantify policy-oriented factors and designs a modified logistic regression model to analyze the main drivers of urban expansion by selecting natural environment, socioeconomic development, and especially policy-oriented variables. Wuhan City in central China is taken as an example: the modified model is applied and compared with the classical model, and the driving mechanism of urban expansion in Wuhan from 2006 to 2013 is determined through spatial analysis. The results show that the urban system planning in combination with various anthropologic and environmental factors can be comprehensively quantified and described by the urban field strength. The methodological innovation of the classical logistic regression model is tested by statistical and spatial analysis methods, and the results verify that the modified regression model can be used more accurately to investigate the driving mechanism of urban expansion in the past and simulate the spatial pattern of urban evolution in the future. View Full-Text
Keywords: urban land use transformation; drivers; statistical method; spatial analysis; modified model urban land use transformation; drivers; statistical method; spatial analysis; modified model
►▼ Show Figures 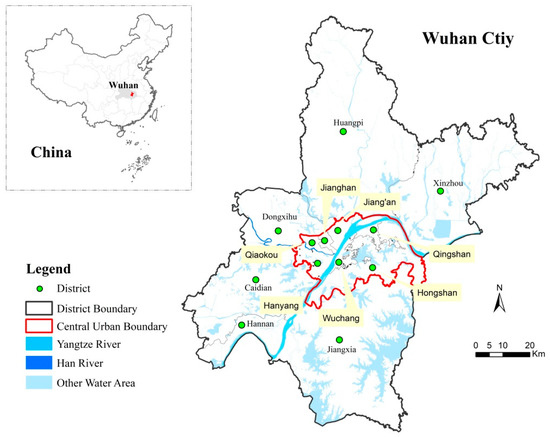