The governing equation of dust air flow can be described by where is the air velocity, is the pressure, and is the Reynolds stress tensor. The RSM was employed in this study to close the RANS equations. The Reynolds stress governing equation can be written as follows:
The terms on the left-hand side of Equation (3) are the time and convective terms, respectively. The terms on the right-hand side of Equation (3) are the turbulent diffusion, stress production, pressure strain, and dissipation terms, respectively. In Equation (3), empirical constants , , and [20]. A two-layer zonal model with enhanced wall function was used near the wall to improve turbulence prediction [20]. More details on the air flow model can be found in the authors’ previous studies [29,30,31].
DPM was adopted to simulate particle motions in air flow. Considering dilute particulate flow in the present study, particle modification on fluids and collisions between particles were neglected. Five main forces were modeled in the simulation. The term on the left-hand side of Equation (4) is the accelerated velocity of the particles. The terms on the right-hand side of Equation (4) are the drag, gravitational, buoyancy, Brownian, and Saffman’s lift forces, respectively. These five forces were the main factors used to determine particle deposition behaviors. The detailed particle motion equation is described as follows [20,21]: where is the time step. However, we conducted a steady simulation in this study. is a timescale constant in the steady calculation in ANSYS FLUENT. The particle dispersion behaviors were related to the time step length in the unsteady simulation. The effects of time step on particle dispersion and deposition characteristics were investigated, as they represent an important research issue in our future unsteady simulation research.
The drag coefficient CD was calculated by [20] where is the particle Reynolds number. Its physical significance is the ratio of inertial force to viscous force per unit mass. where is the particle terminal fall velocity, is the particle diameter, is the fluid kinematic viscosity, and S0 is the spectral intensity of a Gaussian white noise random process. The particle deposition velocity has been widely used to describe the deposition rate of particles. Particle deposition velocity can be calculated by [20] where J is the deposited particle number and is mean particle concentration. The nondimensional particle deposition velocity can be calculated by where is the friction velocity.
The particle relaxation time can be computed by where is the Cunningham slip correction factor, which is calculated by where is the mean free path of gas molecules (air = 0.066 µm), is the particle diameter, is the density ratio of the particle and fluid, is the particle diameter, and is the kinematic viscosity of the fluid. The particle relaxation time represents the time required for a particle to adjust its velocity to a new condition of forces in the fluids. The nondimensional particle relaxation time can be computed by
Considering the flow drag of the duct, a particle deposition efficiency can be defined compared with the uniform duct case [32]: where is the increase ratio of flow drag.

Fully developed velocity and TKE profiles were imposed in the simulation by UDF codes. Fully developed velocity distribution is shown as follows [20]: where D is the duct inlet height and is the air mean velocity. Besides, the fully developed TKE distribution can be computed by [20]
A nonslip condition was adopted on the walls for the fluid phase. A pressure outlet was employed at the duct outlet. For the particle phase, it was assumed that particles would deposit on wall surfaces if they touched the walls, which was consistent with Tian [20]. Particles would leave from the duct outlet in the present simulation [20]. The RANS equation was solved by the finite volume method, while the particle motion equation was solved by the Runge–Kutta approach.

Structured mesh was developed for the BFS duct with different expansion ratios, as shown in Figure 2. A grid independence study was conducted on the particle deposition velocity in the uniform duct. The difference between medium and fine mesh cases was not very large, as displayed in Figure 3. However, as the computational cost was not quite large, the fine mesh was adopted to obtain potentially more accurate results. The first grid interval was 0.05 mm and the increased mesh ratio was 1:2. The mesh numbers were 36,527, 41,547, and 45,312 for BFS ducts of the expansion ratios 4:3, 5:3, and 6:3, respectively.

4.5. Limitations of the Study

Dry deposition in BFS ducts with different air velocities and expansion ratios were investigated by the Eulerian–Lagranian method. Particle deposition velocity, deposition efficiency, and deposition mechanism were obtained and analyzed. The following conclusions can be drawn:

The authors appreciate the financial support provided by the National Key Research and Development Program (No. 2016YFB0901404). This work was also supported by the ”Xinghua Scholar Talents Plan”of South China University of Technology (K5183300); the Science and Technology Planning Project of Guangdong Province: Guangdong-Hong Kong Technology Cooperation Funding Scheme (TCFS) (No. 2017B050506005) and the National Science Fund for Distinguished Young Scholars (No. 51425601). 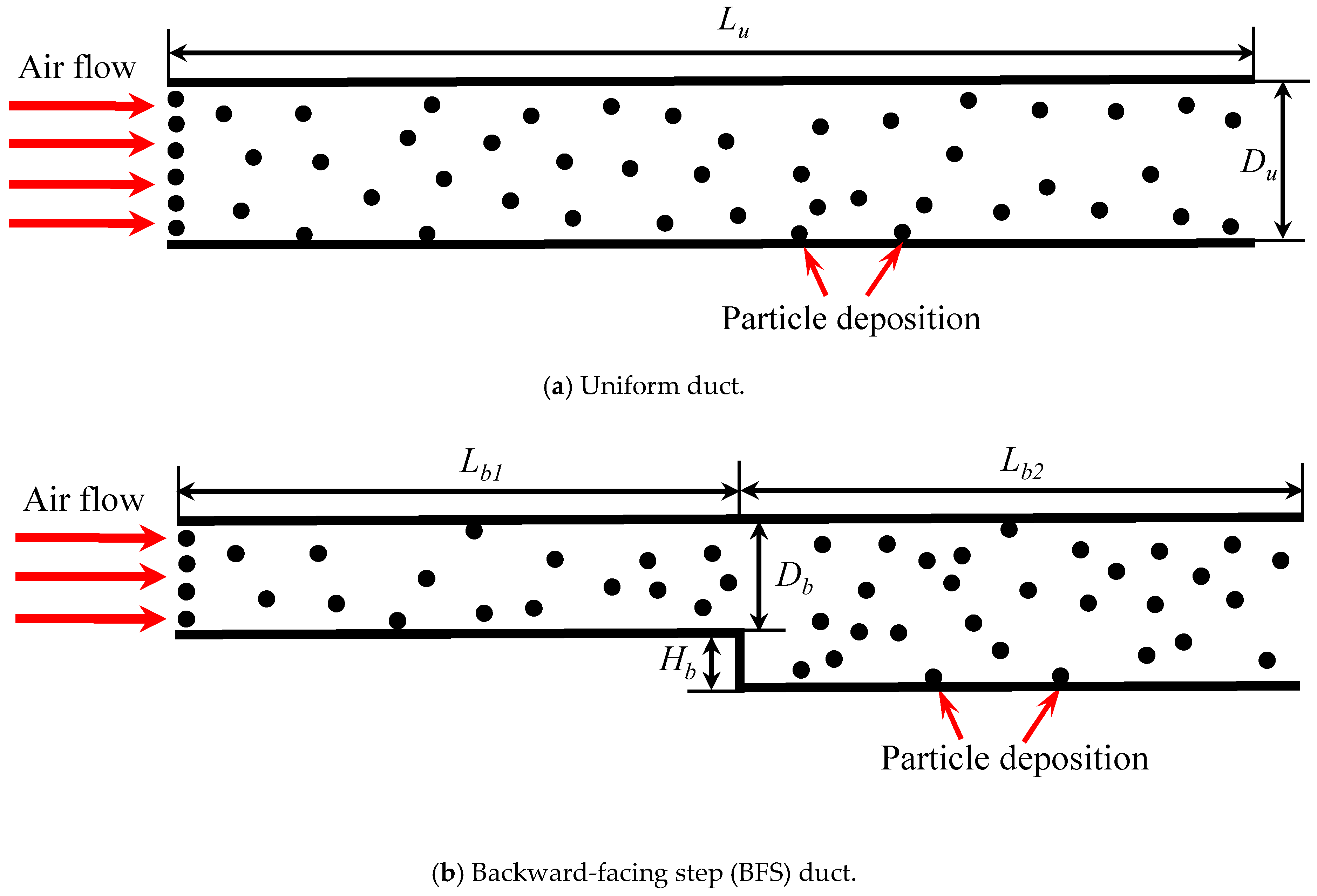 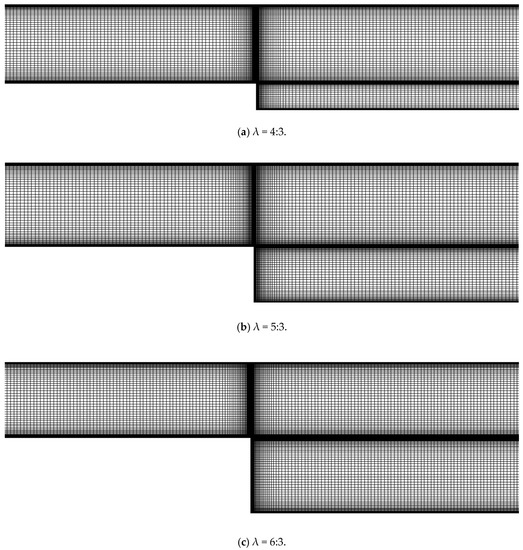 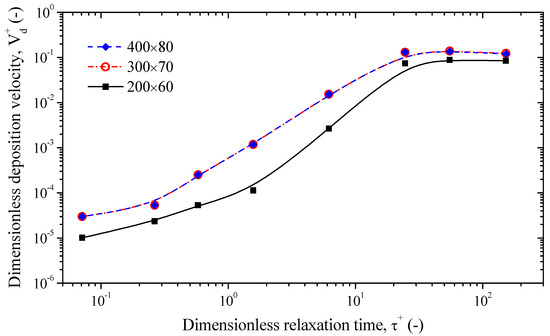 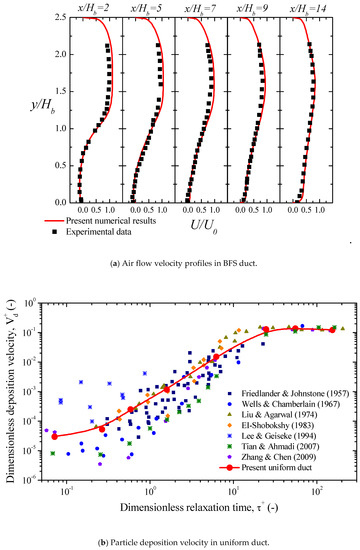 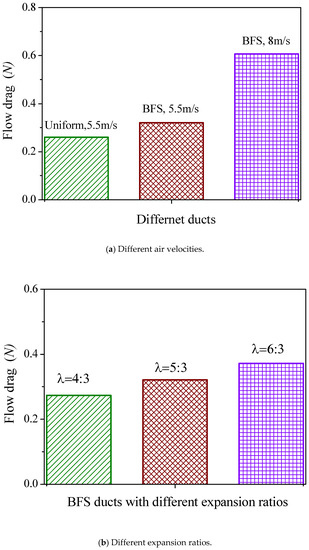 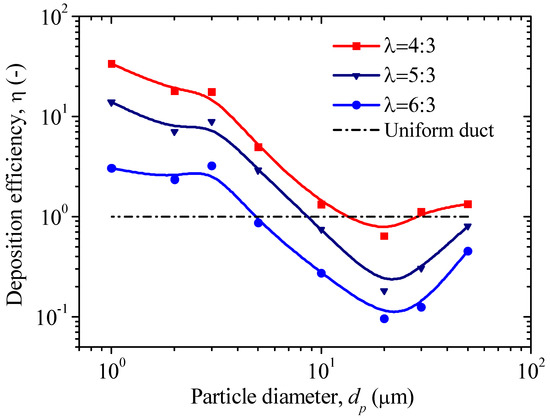 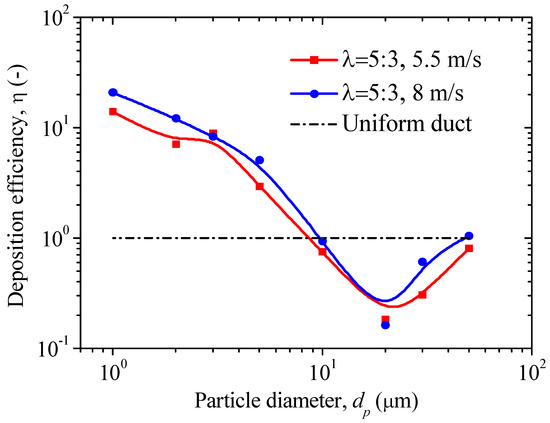 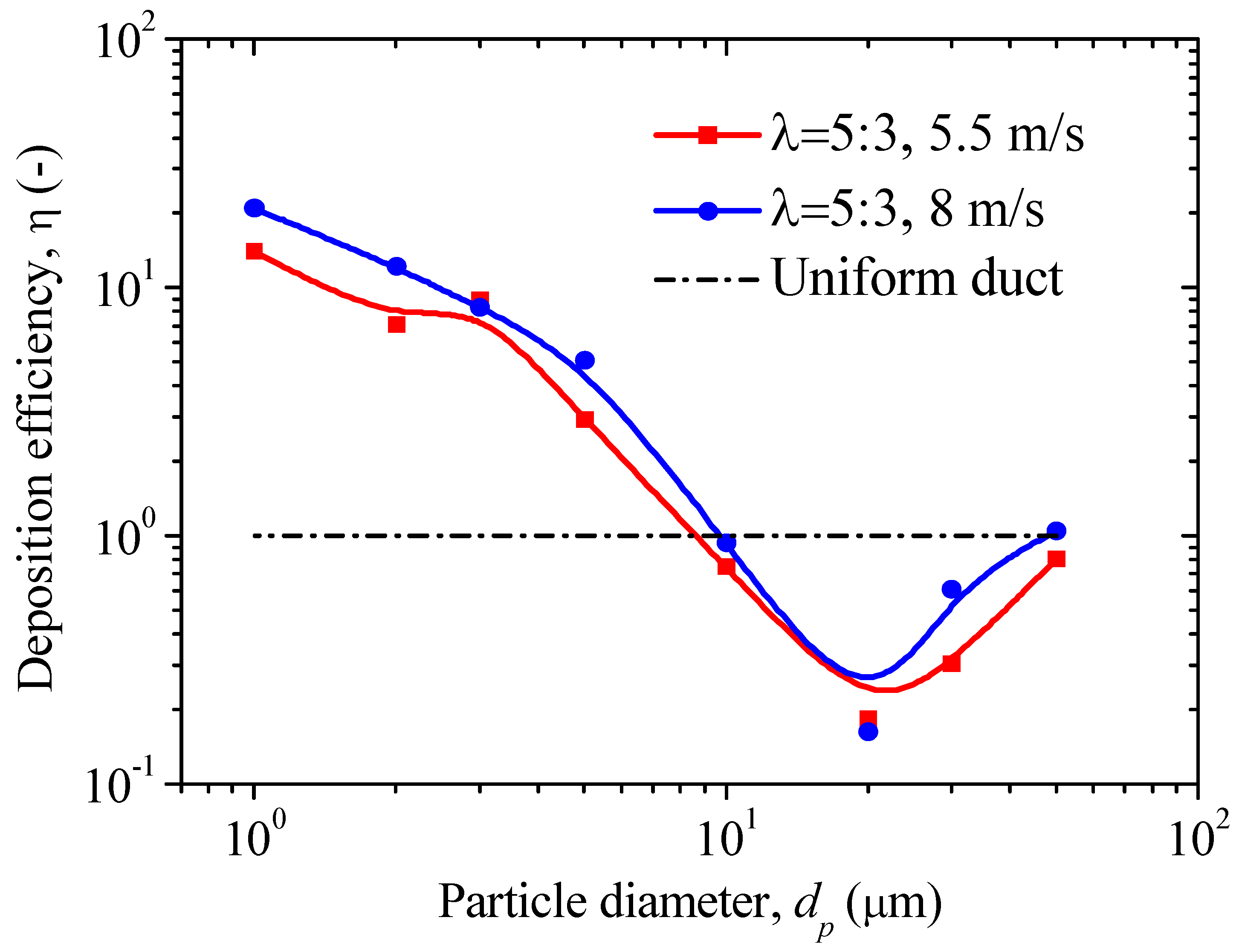 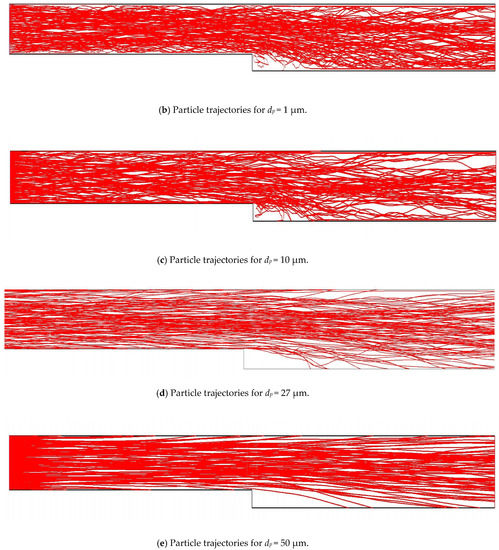 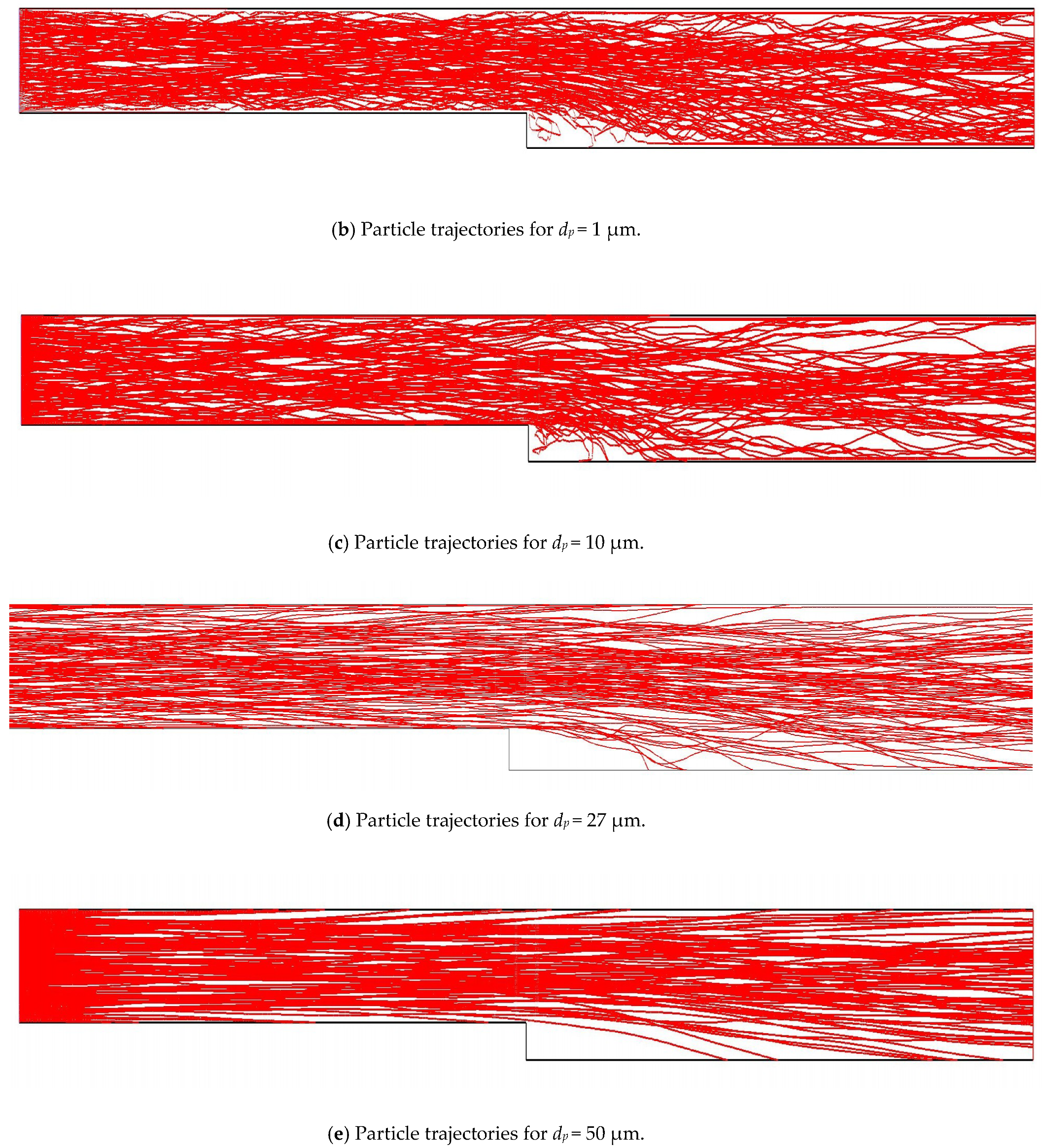 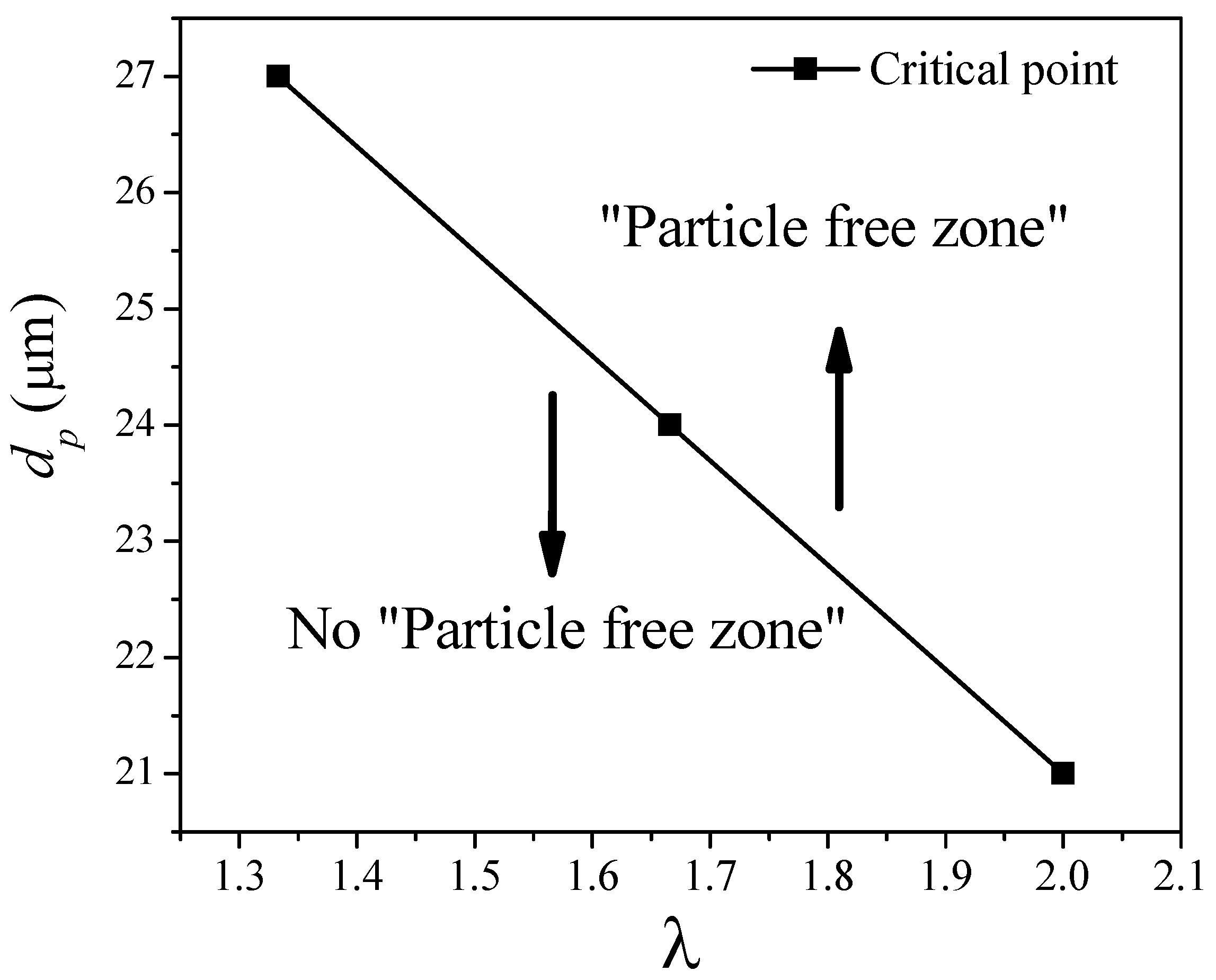