Identification of Inelastic Subway Trips Based on Weekly Station Sequence Data: An Example from the Beijing Subway

Active mode (walking, bicycling, and their variants) users are exposed to various negative externalities from motor vehicle traffic, including injury risks, noise, and air pollutants. This directly harms the users of these modes and discourages their use, creating a self-reinforcing cycle of less active travel, more motorized travel, and more harmful effects. These impacts are widely recognized but seldom quantified. This study evaluates these impacts and their consequences by measuring the additional distances that bicyclists travel in order to avoid roads with heavy motor vehicle traffic, based on a sample of German-Austrian bicycle organization members (n = 491), and monetizes the incremental costs. The results indicate that survey respondents cycle an average 6.4% longer distances to avoid traffic impacts, including injury risks, air, and noise pollution. Using standard monetization methods, these detours are estimated to impose private costs of at least €0.24/cycle-km, plus increased external costs when travellers shift from non-motorized to motorized modes. Conventional transport planning tends to overlook these impacts, resulting in overinvestment in roadway expansions and underinvestments in other types of transport improvements, including sidewalks, crosswalks, bikelanes, paths, traffic calming, and speed reductions. These insights should have importance for transport planning and economics. View Full-Text
Keywords: air pollution; cost-benefit analysis; cycling; Detours; exhaust fumes; transport externalities air pollution; cost-benefit analysis; cycling; Detours; exhaust fumes; transport externalities
►▼ Show Figures 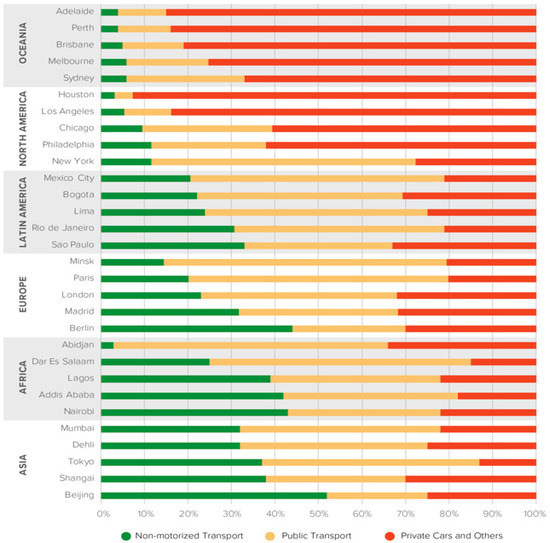