Droughts are risks characterized by their complexity, uncertainty, and a series of other features, which differentiate them from other natural disasters and affect the strategies designed to manage them. These characteristics highlight the close relationship between drought management and water resources management. The following hypothesis is raised in this study—unsatisfactory integration of a drought-risk and water resources management strategies, increases the vulnerability to drought. To corroborate this hypothesis, the Spanish case was analyzed, where droughts are a recurrent phenomenon, due to the Mediterranean climate. Starting from the Intergovernmental Panel on Climate Change (IPCC) framework, which has been proposed to characterize vulnerability as a function of exposure, sensitivity, and adaptive capacity, this study analyzed the vulnerability in the Spanish River Basin Districts, through—(i) the integration of the predictable effects of climate change and the increased risk of exposure in hydrologic planning; (ii) the pressure on water resources that determines the sensitivity of the systems; and (iii) the development and implementation of drought management plans as a fundamental tool, in order to adapt before these events occur. The results showed that despite important advances in the process of conceiving and managing droughts, in Spain, there are still important gaps for an adequate integration of droughts risk into the water resource strategies. Therefore, despite the improvements, drought-risk vulnerability of the systems remained high. View Full-Text
Keywords: drought management; water resource management; climate change; water stress index; drought planning drought management; water resource management; climate change; water stress index; drought planning
►▼ Show Figures 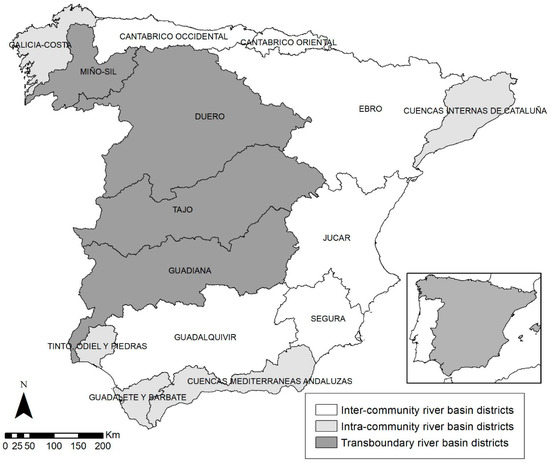