This paper presents a technology based on the use of aged refuse that has proven to be highly effective in the treatment of low biodegradability leachates. The tests were developed using two filled bioreactors arranged in series and operated at steady state. The aged refuse used as filling material was extracted from a city located in the southeast of Mexico and characterized by particle size, humidity, volatile solids, and volumetric weight. On the other hand, bacterial characterization made it possible to identify the presence of species related to the degradation and mineralization of organic compounds, as well as to processes of nitrification or reduction of phosphates and Cr (VI). The bioreactor system was operated under four hydraulic loads (10, 20, 35, and 50 L/m3·d). Maximum removal efficiencies of 85, 86.1, 87.9, 98.6, 97.8, and 97.4% were achieved in COD, BOD5, Color, TP, TN, and N-NH3, respectively, complying with Mexican regulations (NOM-001-SEMARNAT-1996). The system also proved to be stable against shock loads, such as organic load fluctuations in the influent or pH variations. The results of this study show that, in countries such as Mexico, aged refuse extracted from landfills represents a promising option as a sustainable alternative for leachate treatment. View Full-Text
Keywords: biodegradability; bioreactors; leachates; aged refuse biodegradability; bioreactors; leachates; aged refuse
►▼ Show Figures 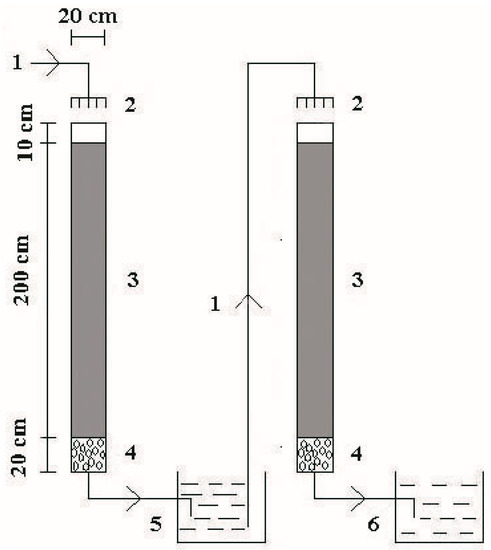