This study examines the relationship between street-level urban design perceptual qualities and walking behavior in the City of Dallas. While the city has the potential to experience growth in pedestrian activities, it exhibits a very low level of walking activity, placing it as one of the least walkable cities in the nation. To assess the impact of urban design qualities on walkability, we collected data on 23 features related to urban design, 11 built environment variables characterized as D variables comprising diversity, density, design, distance to transit, and destination accessibility. The sample included 402 street block faces in Dallas Downtown Improvement District. Accounting for spatial autocorrelation, we found that two urban design qualities, among five, including image-ability—such as a memorable quality of a place, and transparency—as to what degree people can see beyond the street’s edge—significantly influence pedestrian volume in downtown streets. These findings are in agreement with the two previous studies that used the same methodology in different cities (New York City, NYC and Salt Lake City, UT). According to the findings of these three studies, the other urban design qualities including human scale, complexity, as well as enclosure, are not playing a significant role in walkability, despite the theoretical justification and the extensive operationalization efforts. The findings of this study draw policy makers’ attention to creating more appealing and walkable places through the implementation of these urban design qualities. View Full-Text
Keywords: Urban Design; walkability; Transparency; Imageability; D variables Urban Design; walkability; Transparency; Imageability; D variables
►▼ Show Figures 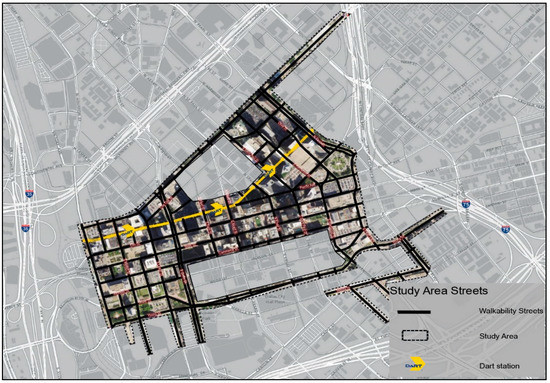