Impact of Agricultural Labor Transfer and Structural Adjustment on Chemical Application: Comparison of Past Developments in the Ecological Civilization Pilot Zones of China and Their Future Implications
Previous Article in Journal

Catastrophic volcanic eruptions, large earthquakes beneath big cities, or giant earthquakes at subduction zones are apparently the biggest problems facing the sustainability of human society. However, imminent prediction methods for these events have not been established so far, except that volcanic eruptions can be predicted only by exceptional efforts by dedicated researchers. For example, the eruption of Mt. Usu, Japan in 2000 [1,2] was predicted by Professor Hiromu Okada at Hokkaido University, Japan. Even if a prediction method has been established, the method may not significantly reduce infrastructure damage. Deliberate considerations of the management of natural disaster risk [3] based on precise predictions may contribute to further decrease economic losses. However, predictions could slightly reduce the number of fatalities. On the other hand, prevention of eruptions or earthquakes, which has never been attempted, if developed, could significantly reduce, not only the number of fatalities, but also infrastructure damage. This paper considers how to prevent these devastating disasters and tries to clarify necessary technical developments, costs, risks, and problems. Euro and Japanese yen are converted at rates of 1 EUR = 1.2 USD and 1 JPY = 0.0091 USD when necessary.

The Yellowstone supervolcano, for example, erupted ca. 2.1 Ma (million years ago) with 2450 km3 ejecta, and 1.3 Ma and 0.63 Ma with 1000 km3 ejecta [4]. The log-normal distribution is a distribution function that can be used to represent eruption intervals [5]. The data are not enough but the average interval and standard deviation are calculated as 105.856±0.0544 years, assuming the log-normal distribution. Let us assume that the next catastrophic eruption occurs 105.856±0.0544 years after the previous eruption, and calculate the probability of eruption after now. Cumulative distribution Φ at x for the log-normal distribution with the average value μ and standard deviation σ can be represented as: where erf is the error function (Figure 1). The probability p at t1 that a catastrophic eruption occurs before t2 can be calculated as:
The probability for an imminent eruption is not zero and it reaches almost 100% in several hundred thousand years (Figure 2).
If Yellowstone erupts, volcanic ash will distribute vastly [6] and 90% of people within 1000 km of the volcano will die due to suffocation. In addition, the air temperature in the Northern Hemisphere will drop by 10 K for several to tens of years due to the sulfate aerosols from the volcano, which will obstruct sunlight from reaching the ground surface [7]. No crops can be raised and most people will starve to death. In short, people in the Northern Hemisphere will certainly be made extinct in several hundred thousand years if we do nothing. Civilization may remain because people in the Southern Hemisphere could survive and move to the Northern Hemisphere. However, let us propose to prevent such catastrophic eruptions by gradually relieving energy for eruptions using a supercritical geothermal system [8,9].
The supercritical geothermal system makes drill holes in the vicinity of a magma chamber. Heat is exchanged at the borehole end and power is generated at the surface. Problems in this system are corrosion of drilling rods and durability of drilling bits due to the high temperature and low pH near magma chambers. These matters can be solved using a silica carbide composite [10] and an electro pulse drilling technique [11].
The eruption energy of Krakatoa in 1883 was estimated to be 200 MT (Megaton TNT (trinitrotoluene) equivalent) [12], namely 840 × 1015 (J). The volcanic explosivity index (VEI) is defined as: where VE is the volume of the ejecta [13]. VEI of Krakatoa (1883) is estimated to be 6 [14]. Assuming that the eruption energy is proportional to ejecta volume, VEI can be converted to eruption energy ER (J) by
The VEI of Yellowstone eruptions for the eruptions of 2.1 Ma, 1.3 Ma, and 0.63 Ma, are estimated to be 8.4, unknown, and 8.0, respectively. Dividing the eruption energy by the average interval of 0.735 My (million years), the average power can be calculated as 8.9 MW and 3.6 MW for the first and the third known eruptions, respectively. Adopting a safe side estimation, it can be said that only 10 MW of supercritical power generation is enough to prevent the catastrophic eruptions of Yellowstone. The output of a moderate scale nuclear power plant is 1 GW; several GW are expected for supercritical power plants. A 10 MW power plant is much smaller than those power plants and no serious technical problems related to output scale are predicted.
The most cost consuming part is drilling in the geothermal power plants. For example, the magma chamber of the Yellowstone supervolcano is ca. 8 km deep and drilling costs are expected to be too expensive. However, the cost of the electro pulse drilling is 800,000 EUR based on 100 EUR/m [11]. Assuming that a drilling hole can be used for 30 years, the drilling cost is just 0.0041 EUR/kWh (0.0049 USD/kWh). This is cheap enough and the power plant can be profitable even after considering other various costs. Therefore, there would be no problems with respect to costs.
On the other hand, humans in the Northern Hemisphere will be made extinct if a catastrophic eruption occurs at Yellowstone. The economic loss would be almost equal to the world GDP (Gross Domestic Product, 74 trillion USD in 2015) at the eruption year. Assuming that the world economy would gradually recover to the previous level in the following 100 years, total economic losses would be 74 × 100/2 = 3700 trillion USD. Dividing the total economic losses by the average eruption interval, the annual economic loss would be ca. 5 billion USD/y.
Drilling unexpectedly encountered magma in the Iceland Deep Drilling Project and supercritical power generation was carried out [8] without any hazards. However, there would still be risks that those drillings stimulate volcanoes and induce unpredicted catastrophic eruptions. This issue should be, of course, deliberately investigated before the method is adopted in practice.

Twenty-two M ≥ 6 earthquakes occurred beneath big cities between 2000 and 2016, for example, in Japan, excluding aftershocks [15], which induced severe human and property damages. In Kumamoto in 2016 (M6.5), for example, 110 people died, 184,643 buildings, including the Kumamoto Castle, collapsed, and the economic losses were 2.4–4.6 trillion JPY (22–42 billion USD [16]). In Tottori in 2016 (M6.6) in Japan, as another example, 30 people died, 14,748 buildings collapsed, and the agricultural damage was 1.6 billion JPY (15 million USD [17]).
Gradual release of seismic energy by injecting water through a drill hole to the seismic fault is proposed to prevent such large earthquakes. An M6 is occurs at an average interval of 100 years in Kumamoto. One thousand M4 earthquakes (an M4 causes almost no damage in Kumamoto) in 100 years will release the seismic energy for an M6 based on the following relationship between seismic energy ES (J) and magnitude M:
Namely, 10 M4 for one year or ca. one M4 for a month will prevent M6 earthquakes.
Fujii et al. (2014) evaluated the amount of water injection V (m3) and the maximum magnitude Mmax of the induced seismicity based on cases of geothermal systems (EGS), water injection to seismic faults, and so on, as follows [18]:
Namely, 9.4 × 105 m3 water should be injected to induce an M4. This amount of water can be injected, for example, for a week at 1.5 m3/s. The scheduled injections would be carried out very carefully under a dense microseismic and seismic monitoring to ensure safety.
Focal depth of typical large earthquakes under big cities are 23 km for Tokyo (1923), 24 km for Nankai (1946), 16 km for Hyogo (1995), 12 km for Kumamoto (2016), 11 km for Tottori (2016) [15], and so forth. On the other hand, even the world’s deepest drillings, such as 12.3 km at the Kola Superdeep Borehole (2011) or 9.1 km at the KTB (German Continental Deep Drilling Program (in German: Kontinentales Tiefbohrprogramm der Bundesrepublik Deutschland), 1994) are not enough. The problems are the same as the supercritical geothermal system, that is, high temperatures and corrosion, and would be solved by the silica carbide composite and electro pulse drilling.
The cost for 9.4 × 105 m3 water is 136 million JPY/year based on the water price for the public baths in Sapporo, Japan. The cost for 100 years is 13.6 billion JPY. The cost for 12 km of drilling would be 56 billion JPY based on a total cost of 42 billion JPY for KTB [19]. Assuming that the drill hole can be used for 100 years, the total cost becomes ca. 70 billion JPY (640 million USD). The cost is already much cheaper than the economic damage of 2.4–4.6 trillion JPY (22–42 billion USD). Moreover, gray-water can be prepared at a much cheaper price and the drilling costs would be as low as 1.2 million EUR (1.4 million USD) by adopting electro pulse drilling.
Equation (6) was obtained from various in-situ test results. However, there is still a possibility that an M6 is unexpectedly induced while water is being injected to induce an M4. This risk can be minimized by gradual injection under careful monitoring. The injection can be cancelled when the released energy exceeds an M4. Further study will also be required to determine the best location of the injection on the seismic fault to induce small earthquakes.

Catastrophic volcanic eruptions, large earthquakes beneath big cities, or giant earthquakes at subduction zones are apparently the biggest problems against the sustainability of human society. However, imminent prediction methods for them have never been established so far except that volcanic eruptions can only be predicted by exceptional efforts by dedicated researchers. Even if a prediction method was established, the method could not significantly reduce infrastructure damage, although it could slightly reduce the number of fatalities. On the other hand, prevention of eruptions or earthquakes could significantly reduce not only the number of fatalities but also infrastructure damage. Therefore, the authors propose to prevent those devastating disasters as follows.
Gradual energy release by supercritical power generation was proposed to prevent catastrophic eruptions. The necessary technical innovation is drilling into the depths. However, after the innovation, power generation itself would be profitable. The risk is unpredicted induction of unwanted catastrophic eruptions.
Gradual seismic energy release by injecting water into the seismic sources was proposed to prevent large earthquakes beneath big cities. The necessary technical innovation is the same as above. After the innovation, the costs would be much less than the average damage by earthquakes. The risk is unpredicted induction of unwanted large earthquakes.
Prevention of giant earthquakes at subduction zones by exploding the existing nuclear warheads underground was proposed. The cost is less than 1/60 of average giant earthquake damage. The risk is the possible unexpected induction of giant earthquakes. The biggest problem would be obtaining social consensus. However, it is worth to further consider this method because it would significantly contribute to world peace by not only preventing giant earthquakes but also by disarming the nuclear weapons.
The authors admit that the estimation on cost and risk in this study are very rough at this stage. More precise estimations should be done in further study. 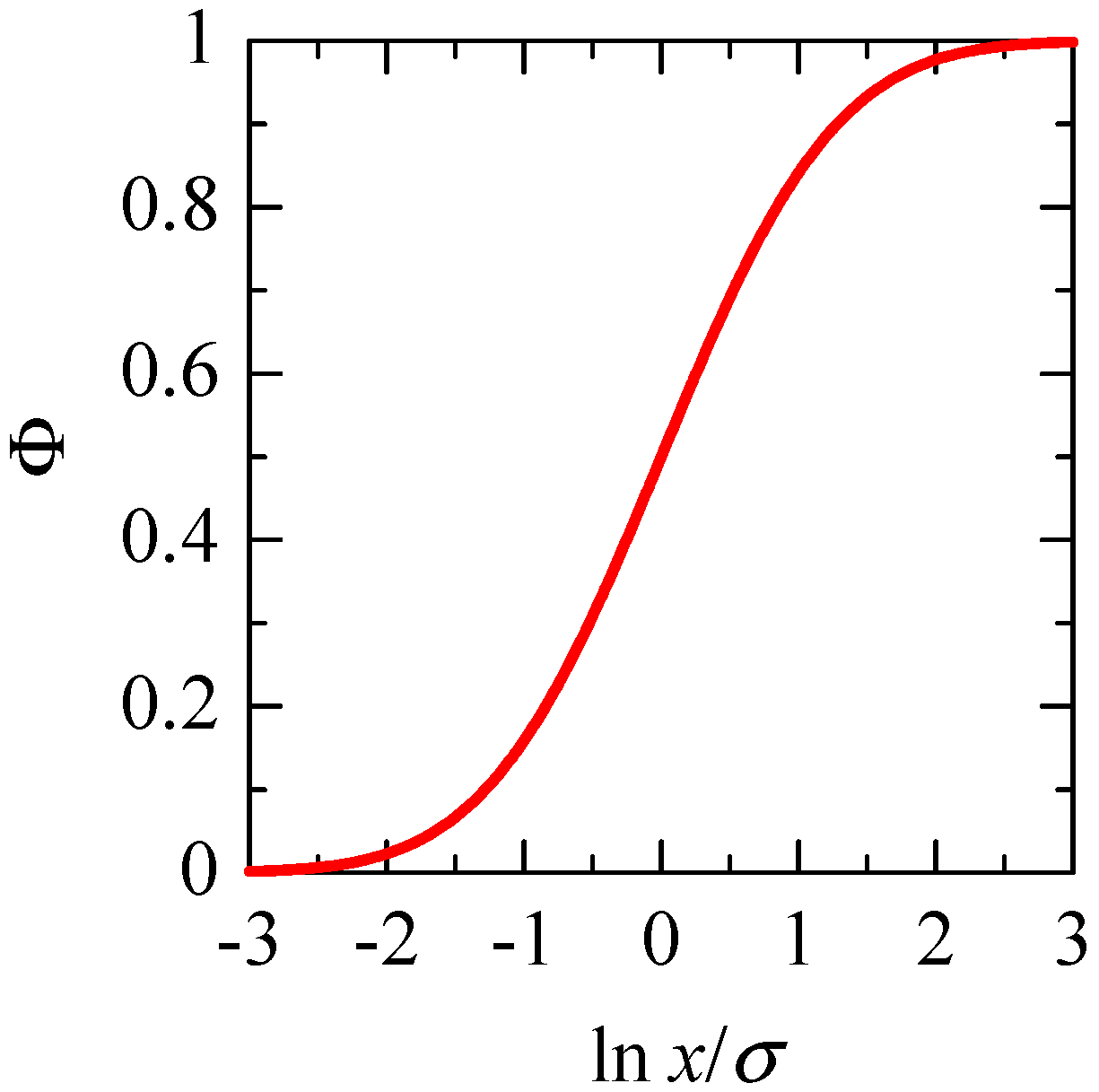 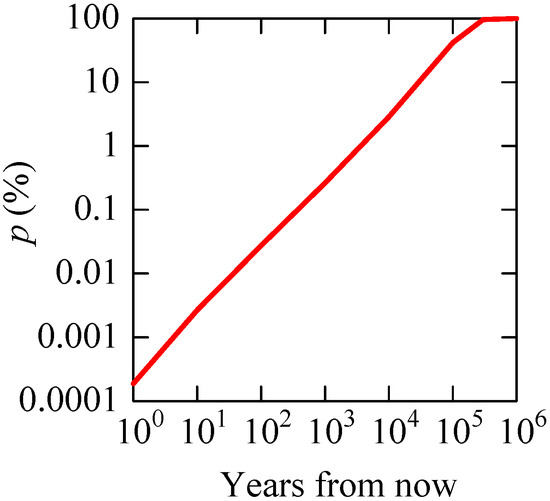 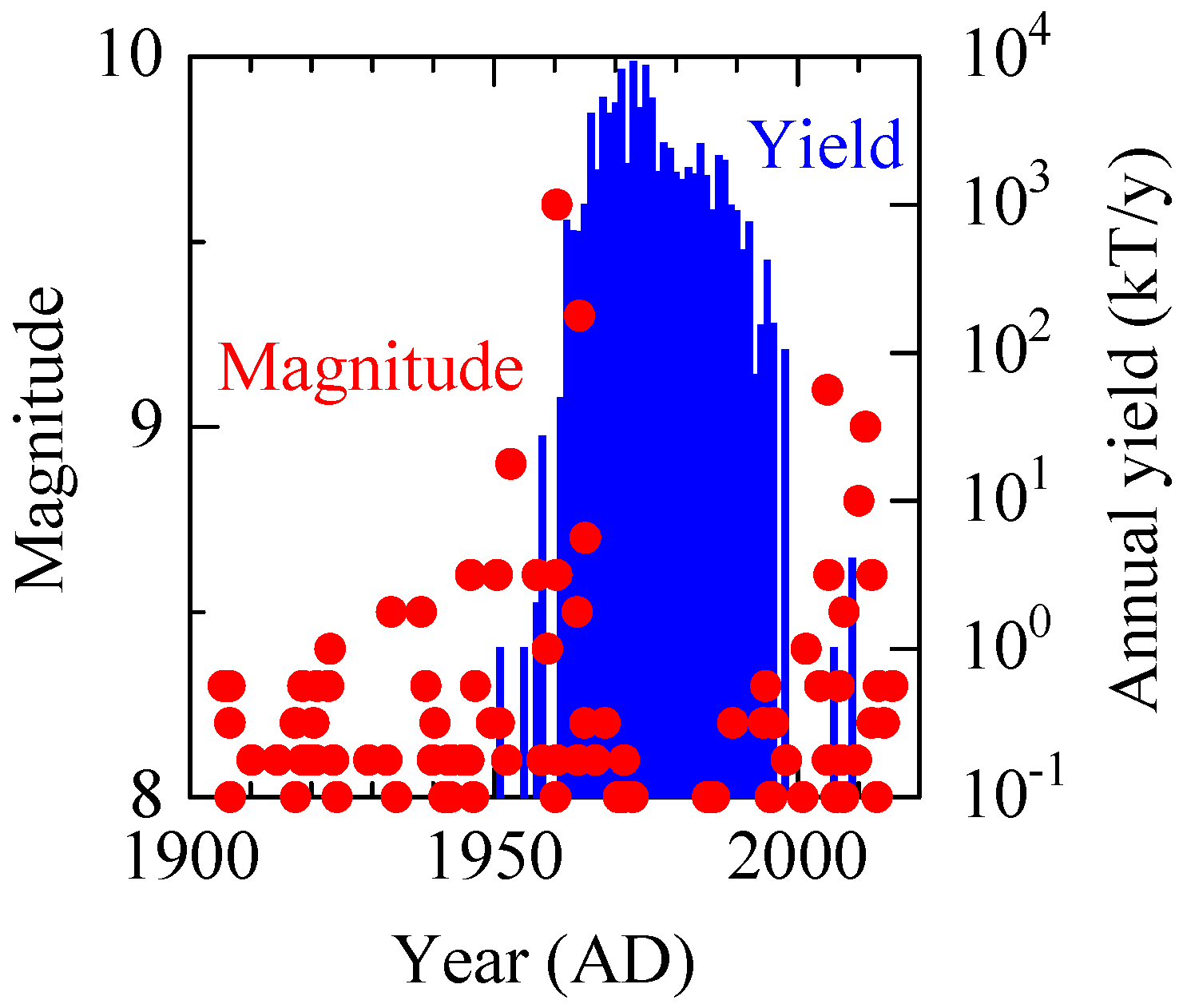 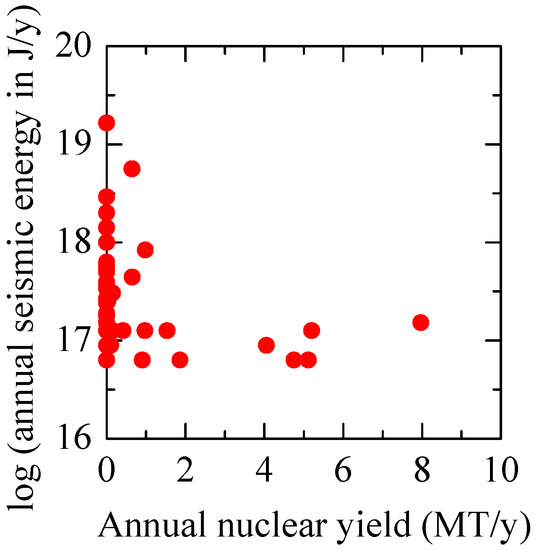 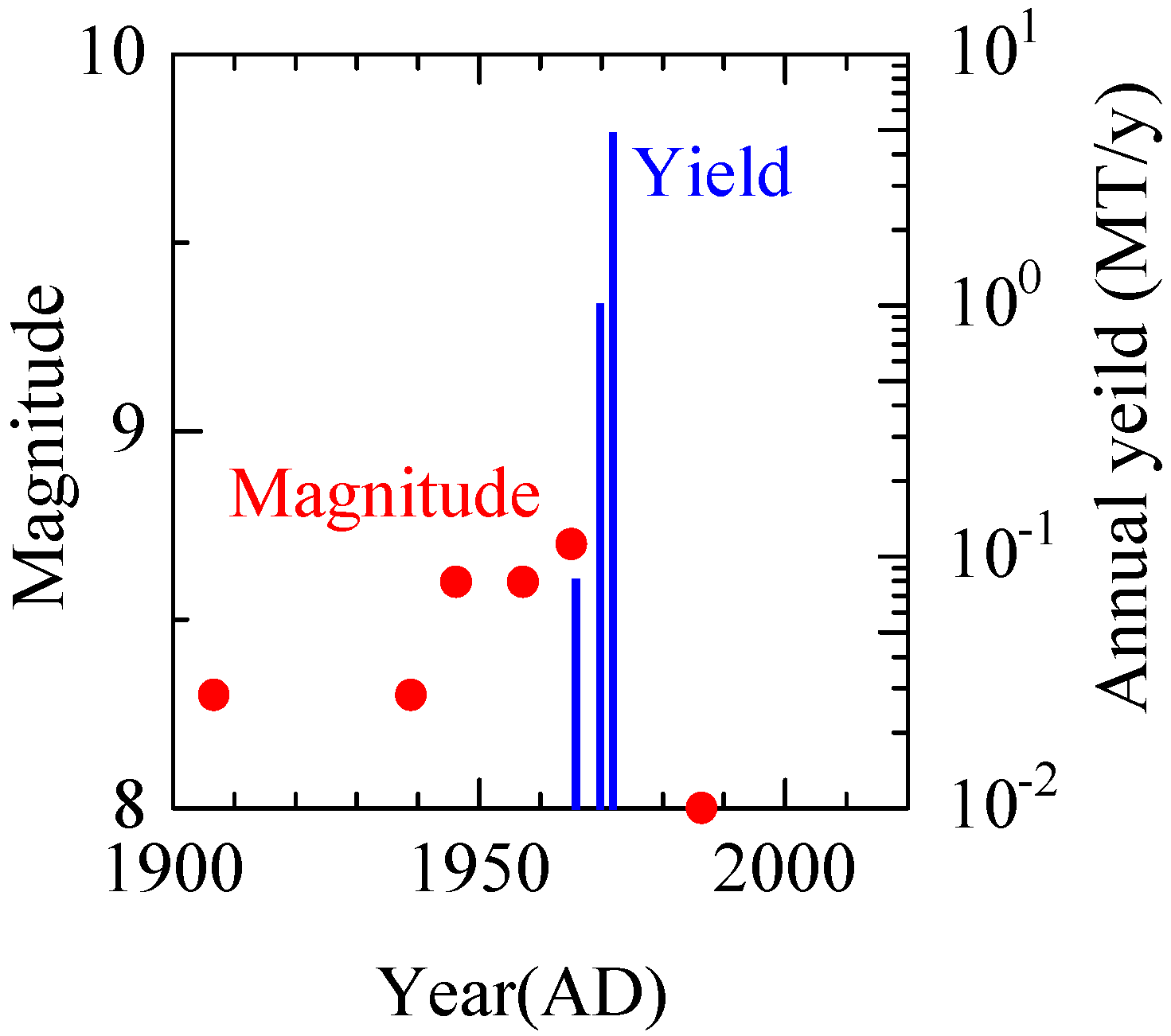 Table 1. Probability of the null hypothesis.
Table 1. Probability of the null hypothesis.
© 2018 by the authors. Licensee MDPI, Basel, Switzerland. This article is an open access article distributed under the terms and conditions of the Creative Commons Attribution (CC BY) license (http://creativecommons.org/licenses/by/4.0/).
We use cookies on our website to ensure you get the best experience. Read more about our cookies here.
Accept
We have just recently launched a new version of our website. Help us to further improve by taking part in this short 5 minute survey here. here.
Never show this again