Aggressiveness of Grade 4 Gliomas of Adults

Grade 4 adult gliomas are IDH-mutant astrocytomas and IDH-wildtype glioblastomas. They have a very high mortality rate, with survival at 5 years not exceeding 5%. We aimed to conduct a clinical imaging and morphogenetic characterization of them, as well as to identify the main negative prognostic factors that give them such aggressiveness. We conducted a ten-year retrospective study. We followed the clinical, imaging, and morphogenetic aspects of the cases. We analyzed immunohistochemical markers (IDH1, Ki-67, and nestin) and FISH tests based on the CDKN2A gene. The obtained results were analyzed using SPSS Statistics with the appropriate parameters. The clinical aspects representing negative prognostic factors were represented by patients’ comorbidities: hypertension (HR = 1.776) and diabetes mellitus/hyperglycemia (HR = 2.159). The lesions were mostly supratentorial, and the temporal lobe was the most affected. The mean volume was 88.05 cm3 and produced a midline shift with an average of 8.52 mm. Subtotal surgical resection was a negative prognostic factor (HR = 1.877). The proliferative index did not influence survival rate, whereas CDKN2A gene mutations were shown to have a major impact on survival. We identified the main negative prognostic factors that support the aggressiveness of grade 4 gliomas: patient comorbidities, type of surgical resection, degree of cell differentiation, and CDKN2A gene mutations. View Full-Text
Keywords: astrocytoma; CDKN2A; glioblastoma; IDH1; Ki-67 astrocytoma; CDKN2A; glioblastoma; IDH1; Ki-67
►▼ Show Figures 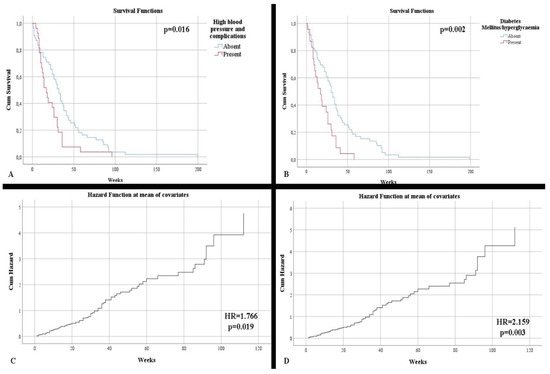