Prevalence, Trends, and Outcomes of Pulmonary Embolism Treated with Mechanical and Surgical Thrombectomy from a Nationwide Inpatient Sample

OK-432 Treatment of Ranula Intruding into the Cervical Region

Ranula is a commonly encountered disorder for general otolaryngologists, but plunging ranula intruding into the cervical region is rare [1]. Plunging ranula appear as pools of mucous are surrounded by fibrous tissue and chronic inflammatory cells, including histiocytes. Epidermoid cysts, thyroglossal duct cysts, cystic hygroma and branchial cleft cysts should be kept in the mind as differential diagnoses [2,3]. Trans-oral excision of the sublingual gland and the evacuation of the ranula are used as standard treatments [2,3]. However, potential side effects, such as insufficient surgery, cosmetic problems, nerve injury, and vascular damage, can occur [1,2,3]. Recently, OK-432 treatment has been reported as efficacious in the treatment of ranulas [4,5,6,7,8,9]. However, its effectiveness in patients with ranula intruding into the cervical region is not clear. To clarify this point, we examined it in this paper.

Patients: Eight patients with ranulas intruding into the cervical region were treated with OK-432 at Tohoku Medical and Pharmaceutical University and Fukase Clinic between January 2016 and February 2019. One representative case is presented here. Essentially, OK-432 treatment was performed on an outpatient basis without hospitalization. Informed consent was obtained under protocols approved by the Institutional Review Board (2016-2-020). The diagnosis of ranula was confirmed by clinical symptoms, MRI or CT, and aspiration cytological examination. The presence of peripheral fibrosis, lined with a non-keratinizing stratified squamous epithelial layer with a central pool of mucin, inflammatory cells and mucinophages was in accordance with ranula.
OK-432 therapy: OK-432 seems to be safer and more effective than other sclerosing agents, such as boiling water, hypertonic saline, ethanol, tetracycline, cyclophosphamide, sodium morrhuate, and bleomycin [6,7]. The fluid component of each ranula was completely suctioned, with compression as needed, with an 18- or 27-gauge needle. The suctioned fluid was examined in the laboratory. The OK-432 (Picibanil, Chugai Pharmaceutical Co., Tokyo, Japan) was diluted with saline solution (1 to 2 Klinische Einheit (KE) per mL; 0.1 to 0.2 mg/mL) and injected into the ranula with a new syringe. Successful injection was performed without resistance. Patients received a second or third treatment if the response to the previous was insufficient.
Follow-up: Regular examination was performed for all patients for a mean of 25.3 months (range, 12–42 months) after the last treatment. Prophylactical analgesics were prescribed for possible fever. Induration and redness of the skin at the injected site were observed the day after injection. Local and systemic conditions were examined, and all patients were evaluated at weeks 1 and 6 after OK-432 treatment. We defined “total shrinkage” of cysts as complete absence, “marked reduction” as a reduction of more than 50%, and “partial reduction” as a reduction of less than 50%, clinically or by using computed tomography or magnetic resonance imaging.

OK-432 treatment was performed for eight patients with ranula intruding into the cervical region (Table 1). The mean age of patients was 25.8 years (range, 4–65 years). The maximum size of the ranula ranged from 7.7 to 16.4 cm (mean, 11.9 cm). The mean number of OK-432 treatments was 1.4 (range, 1–3), and the mean observation period was 25.3 months (range, 12–42 months). The mean treatment dose of OK-432 was 1.9 KE (range, 1–2 KE), and the mean total dose was 2.8 KE (range, 1–7 KE). The clinical results of the OK-432 treatment did not to depend on the cyst size, location or the patient’s age. Ten OK-432 treatments were performed on eight lesions, but six of the eight patients required only one treatment. All cases showed a total shrinkage or marked reduction (observation for more than 1 year after the final injection without any recurrence or further treatment) after one to three injections. A representative case is shown in Figure 1. This case showed total shrinkage after a single OK-432 treatment.
No patients had any serious complications apart from local swelling of the injected site and moderate-grade fever (37.5–38.5 °C) for a few days after injection, usually manageable by antipyretics. Local scar or deformation after OK-432 treatment was not observed in any patients.

Ranula is common disorder of the oral cavity [1]; however plunging ranula intruding into the cervical region is rare [2]. The reported conservative and surgical procedures for ranula include a simple aspiration, fenestration, incision and drainage, excision, and excision along with the sublingual gland [1,2,3,8]. Potential surgical complications that need to be considered include vascular damage, nerve injury, recurrence due to insufficient surgery, and cosmetic problems [1,2,3,4]. OK-432 is a lyophilized streptococcal preparation made from the Su strain of A-group Streptococcus pyogenes incubated with penicillin. It was developed as an immunotherapeutic agent of cancer. We reported previously that OK-432 therapy is effective in the treatment of various cystic diseases, including ranula, lymphangioma, salivary mucocele, auricular hematoma and branchial cleft cyst. OK-432 seems to be more safe and effective than other sclerosing agents, such as boiling water, hypertonic saline, ethanol, tetracycline, cyclophosphamide, sodium morrhuate, and bleomycin. Although the complication rates with treatment by these sclerosing agents are minimal, the limited success and unpredictable local scarring, as well as systemic side effects caused by spread of the agents beyond the endothelial lining of the lesion, have been observed. Bleomycin, in particular, can cause serious side effects, including fibrosis of the lung, independent of the total dosage [10,11,12,13,14,15,16].
In the treatment of plunging ranula, there was no significant difference in cure rate between the intraoral and transcervical approaches, although they both showed higher cure rates than OK-432 treatment [8]. The advantages of OK-432 treatment over surgical modalities can be summarized as follows: (1) special equipment and hospitalization were not required for OK-432 treatment; (2) local scar or deformation was not observed after OK-432 treatment; and (3) the time for procedure is short [6,10,11]. OK-432 treatment is cosmetically and economically more beneficial than surgical modalities and can be used as a substitute for surgery [7,10,14].

OK-432 treatment is straightforward, secure, and efficacious and can be substituted for surgery in the treatment of ranula extending into the cervical region.

The study was approved by the Institutional Review Board (2016-2-020) of Tohoku medical and pharmaceutical university.

The authors have no conflicts of interest to disclose. 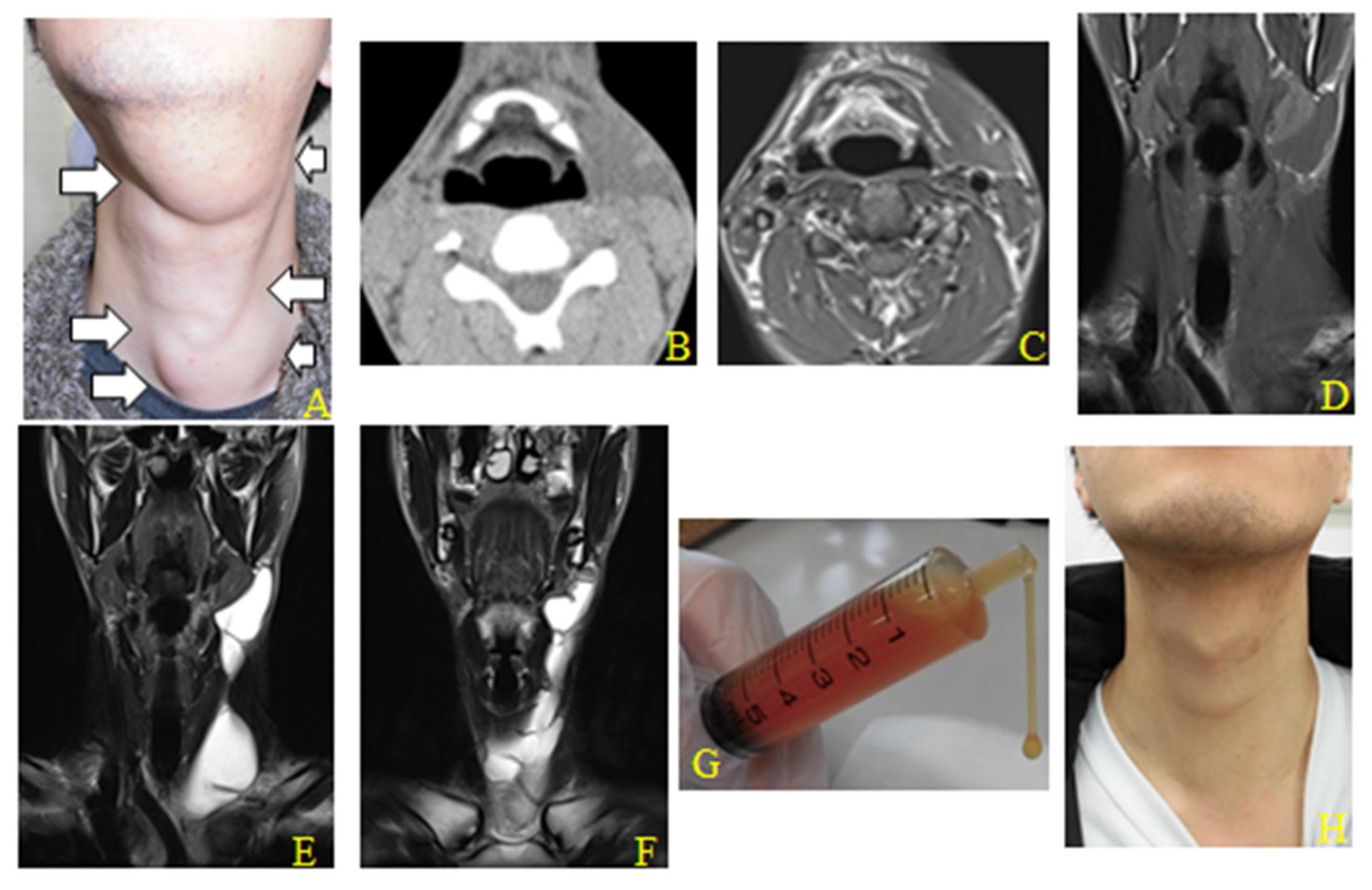 Table 1. Clinical Characteristics.
Table 1. Clinical Characteristics.
Size, maximum diameter (cm); TS, total shrinkage; MR, marked reduction; Follow-up is in months; No., number; Tx, treatments; Further Tx, Further treatment; Dose is in KE (Klinische Einheit); Total dose is in KE; HT, hypertension; af, atrial fibrillation; CI, cerebral infarction.
© 2022 by the authors. Licensee MDPI, Basel, Switzerland. This article is an open access article distributed under the terms and conditions of the Creative Commons Attribution (CC BY) license (https://creativecommons.org/licenses/by/4.0/).
We use cookies on our website to ensure you get the best experience. Read more about our cookies here.
Accept
We have just recently launched a new version of our website. Help us to further improve by taking part in this short 5 minute survey here. here.
Never show this again