Objectives: Fetuin-A is a circulating calcification inhibitor that prevents coronary artery calcification (CAC) by increasing calcium phosphate solubility and inhibiting VSMC differentiation and apoptosis. In this study, we investigated the correlation between rs4918 and CAC in patients with coronary artery disease (CAD). Methods: Forty-two healthy individuals and eighty-one CAD patients were recruited in the present study. The CAC score (CACS) was measured by CT angiography and the genotype analysis of rs4918 single-nucleotide polymorphism SNP was performed by the polymerase chain reaction-restriction fragment length polymorphism (PCR-RFLP) technique. Results: The CACS was significantly higher in CAD patients compared to healthy individuals (p < 0.001); however, there was no significant difference between the mean CACS in the presence and absence of rs4918 (p = 0.792). The mean calcium score of the left main coronary artery (LMCA) was significantly lower in carriers of the rs4918 allele (p = 0.036). The frequency of rs4918 SNP was almost similar in the control group and CAD patients (p = 0.846). Conclusions: in patients with CAD, we found no significant association between rs4918 SNP and CACS, indicating that carriers of this allele are not at increased risk of developing cardiovascular diseases compared with those without.
Keywords: Fetuin-A; rs4918; coronary artery calcification; polymorphism Fetuin-A; rs4918; coronary artery calcification; polymorphism

Coronary artery disease (CAD) is one of the major causes of mortality worldwide, and atherosclerosis is the primary etiology [1]. Coronary artery calcification (CAC) is the characteristic feature of atheroma plaque, and its extent is increased with the progression of the lesion. Calcified plaques are associated with an almost 1.7-fold higher incidence of mortality, independent of other cardiovascular risk factors [2]. Although traditional Framingham risk factors, including age, sex, hyperlipidemia, hypertension, high body mass index, diabetes, and cigarette smoking, influence the severity of atherosclerosis and the extent of CAC, these environmental factors account for only 40% of the inter-individual variety, and more than 40% of the variations in the extent of CAC are due to genetic factors [3].
It is believed that the transdifferentiation of VSMCs to the osteoblastic lineage and the loss of balance between inhibitors and inducers of calcification are the prominent etiologies of ectopic calcification. In this context, fetuin-A has been identified as an important inhibitor of ectopic calcification.
Fetuin-A, also called alpha2-Heremans Schmid glycoprotein (AHSG), is a 62 kDa glycoprotein and a member of the cystatin superfamily which is synthesized and secreted from the liver and is present abundantly in the circulation and extracellular space [4]. It is a potent inhibitor of calcification; nearly 50% of blood capacity to inhibit ectopic calcification is attributed to fetuin-A activity [5]. It inhibits vascular calcification by binding to hydroxyapatite crystals and forming the fetuin mineral complex (FMC) that enhances the calcium phosphate blood solubility [6]. Furthermore, it has anti-inflammatory activity by preventing the production and release of tumor necrosis factor (TNF) α from activated macrophages, which have a central role in the pathophysiology of CAD [7].
Several in vitro and in vivo studies have demonstrated its role in the pathogenesis of CAD. Fetuin-A-deficient mice on a calcium- and vitamin D-rich diet developed ectopic calcification, which clearly confirmed its role as a calcification inhibitor [8].
It was shown that fetuin-A is directly associated with the intimal–medial thickness (IMT), a hallmark of subclinical atherosclerosis, which points to its atherogenic property [9]. In dialysis and end-stage renal disease (ESRD) patients, the reduction in this protein has been reported to correlate with the acceleration of vascular calcification and all-cause and cardiovascular death [10,11]. Genetic studies have demonstrated the impact of the AHSG gene variations on its serum level, CVD complications, and morality [4,11]. The role of AHSG polymorphisms and haplotypes in the progression of the calcified plaque was demonstrated in a group of European American diabetic patients with subclinical atherosclerosis and without advanced renal dysfunction [12]. Higher mortality rate, vascular calcification, and lower fetuin-A concentrations have been reported in ESRD patients carrying rs4918 single-nucleotide polymorphism (SNP) [11]. Additionally, this allele has been shown to be associated with arterial stiffness in patients with normal kidney function [13]. These data suggest that genetic variations in the AHSG gene may influence the extent of CAC.
To our knowledge, no clinical study has evaluated the relationship between the rs4918 allele and CAC in patients with CAD. In the present study, the correlation between the rs4918 polymorphism and coronary artery calcification was evaluated, and its frequency in CAD participants and healthy individuals was studied.

Eighty-one patients diagnosed with ischemic heart disease who fulfilled the inclusion and exclusion criteria entered the study. The inclusion criteria included age above 35 years and the presence of coronary artery disease, and the exclusion criteria involved disturbed calcium and phosphorus homeostasis, acute or chronic kidney disease (CKD), malignancies, bone disorders, primary and secondary hyperparathyroidism, and active infectious diseases.
The calcium score was measured in four main coronary arteries, including the left main coronary artery (LMCA), right coronary artery (RCA), circumflex artery (CX), and left anterior descending artery (LAD) using CT angiography.
The control group consisted of forty-two subjects free of any cardiovascular diseases (including myocardial infarction, angina, stroke, transient ischemic attack, heart failure, having current atrial fibrillation, taking nitroglycerin, or undergoing angioplasty, coronary artery bypass graft, valve replacement, pacemaker or defibrillator implantation, or any surgery on the heart or arteries); any chronic diseases; and CVD risk factors including age (above 50 years for women and 45 years for men), sex, history of death due to CVD in the first-degree family, smoking, diabetes mellitus, and hypertension. Additionally, all their biochemical measurements had to be in the normal range.
Clinical examinations, biochemical assays, calcium score measurements, and blood sampling were conducted in the cardiology department of the Razavi hospital in Mashhad, Iran, from 2014 to 2018. Ethical approval was obtained from the university medical ethics committee. All the participants signed written informed consent.
Demographic and clinical data including age, sex, history of previous and current diseases and medications, weight, height, smoking status, and family history of CVD were collected in a questionnaire. Biochemical parameters of lipid profile (total cholesterol, triglycerides, high- and low-density lipoprotein), and fasting blood sugar (FBS) were determined for all the participants by standard laboratory protocols.

The coronary artery calcium score was significantly higher in CAD patients compared to healthy individuals (p < 0.001); however, no significant difference was observed in the CACS in the presence and absence of rs4918 SNP (p = 0.792).

3.3. Comparison between Calcium Scores of the Main Coronary Arteries in the Presence and Absence of rs4918 SNP

The calcium score of four main coronary arteries was measured; the highest CACS was observed in the LAD artery, and the LMCA had the lowest CACS (Table 2).
The calcium score of the LMCA was significantly lower in carriers of the rs4918 allele (p = 0.036) compared with the CACS of LMCA in individuals without this allele; on the other hand, an insignificantly higher CACS was observed in the LAD artery in the presence of this SNP compared with the CACS in its absence (p = 0.120) (Figure 1).

The authors are thankful for the funding of this study by the Research Council of Mashhad University of Medical Sciences.

This study is part of a research thesis for a Ph.D. Degree at Mashhad University of Medical Sciences. 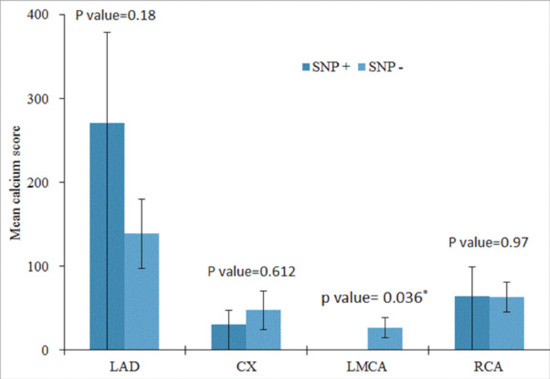 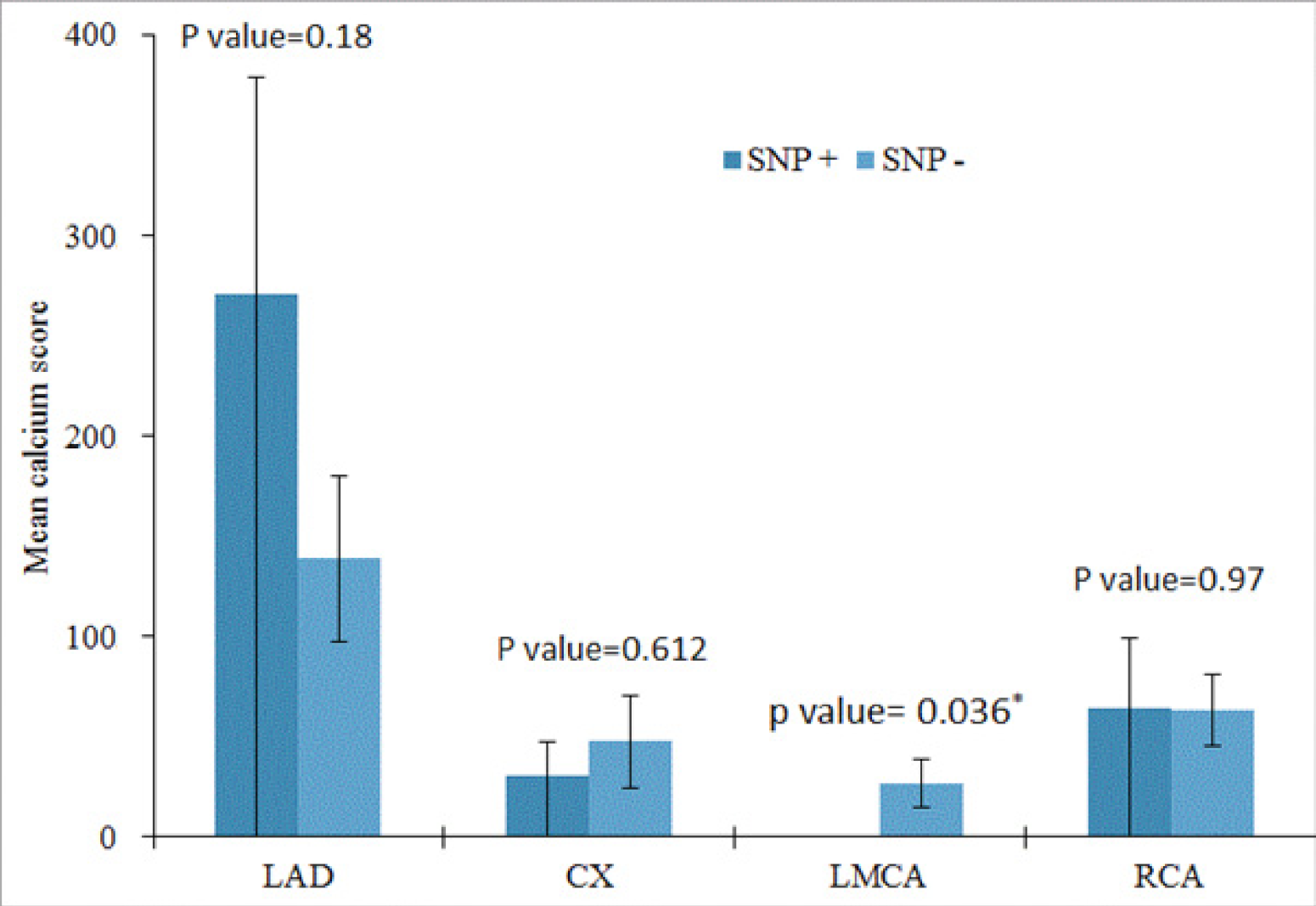