Strategies of Success for Social Networks: Mermaids and Temporal Evolution

:
The smart energy system, viewed as an “Energy Internet”, consists of the intelligent integration of decentralized sustainable energy sources, efficient distribution, and optimized power consumption. That implies the fault diagnosis for a smart energy system should be of low complexity. In this paper, we propose a Strong Tracking Unscented Kalman Filter () and modified Bayes’ classification-based Modified Three Sigma test (), abbreviated as , for smart energy networks. The theoretical analysis and simulations indicate that detects faults with a high accuracy and a low complexity of .
Keywords:
fault diagnosis; low-complexity; energy internet; smart city

The components a smart city include smart infrastructure, smart buildings, smart transportation, smart energy, smart health care, smart technology, smart governance, smart education, and smart citizens [1,2,3,4,5], among which the concept of smart energy can be viewed as an “Energy Internet” model [6,7,8,9,10,11]. The backbone of a smart energy system is the smart energy grid, the smart energy metering of which is an important component. For example, the smart meter records consumption of electric energy in certain time intervals and communicates that information to the utility for monitoring and billing. To ensure a green model for smart cities [12], minimal energy consumption is required. To serve such a purpose, fault diagnosis in green smart cities should be efficient in low complexity [13,14,15].
There exist many filter-based fault diagnosis algorithms specifically designed for nonlinear time-varying stochastic systems. In Reference [16], Ma et al. proposed a fault-related parameter estimation method based on a strong tracking filter for state assessment, as well as a logistic regression algorithm for root cause classification. In Reference [17], Daroogheh et al. designed a particle filter-based dual estimation strategy for both time-varying parameters and states. In Reference [18], Yin and Zhou proposed an intelligent particle filter to solve the problem of misleading state estimation due to the particle impoverishment. They designed a genetic-operators-based strategy to improve the particle diversity. Zhao et al. [19] developed an optimal unbiased finite impulse response filter, the estimator of which is used to minimize the mean square error subject to the unbiasedness constraint. In Reference [20], He et al. used the residual signal to detect sensor bias faults first and then employed residual analysis for faults isolation. Ge et al. [21] studied a performance comparison of the strong tracking filter and Kalman filter. In Reference [22], Zhao et al. designed an adaptive robust square-root cubature Kalman filter () with the noise statistic estimator to solve the decline or divergence problem of the accuracy of the . Residual test is a system-level fault detection algorithm [23] that can judge whether a set of measurement information in the Kalman filter system is effective in real time, based on which interactive residual fault detection method was proposed to identify both hard and soft faults, which are similar to the jump type fault and the soft fault, respectively. Huang and He [24] utilized two Bernoulli random variables to model the dead-zone effect. In addition, a Tobit Kalman filter is brought forward to generate a residual that can indicate the occurrence of an intermittent fault. The time-domain uncensored Kalman filter state estimation methodology is applied to address short circuit faults and transient load conditions [25]. On the other hand, researchers have been working on non-filter-based fault diagnosis algorithms for decades. Lau et al. [26] proposed a centralized diagnosis algorithm based on end-to-end transmission time, and then they employed the Bayes’ classification to improve the diagnosis accuracy. In Reference [27], Nandi et al. used the Pearson test to find faulty nodes within a square grid based network. Gong et al. [28] proposed an optimal deducing model to locate faulty nodes based on the return message from the sink node. Jiang [29] developed a two-phase fault detection algorithm based on the majority voting. Panda and Khilar [30] applied a three Sigma test to locate faulty nodes. In Reference [31], Sharma et al. proposed a decentralized algorithm based on spatio-temporal correlation. In Reference [32], Swain et al. integrated the network cut set and majority voting to detect the faulty nodes. Recently, Samuel et al. [33] presented the design of a sliding mode and an unknown input observer for Takagi-Sugeno systems to deal with the problem of inexact measurements of the premise variables. In Reference [34], a data-driven system based on PCA was designed to detect and quantify fluid leaks in an experimental pipeline.
Although these fault diagnosis approaches are able to detect certain industrial system faults, it remains a challenge to design a fault diagnosis model that meets practical production requirements [35,36,37]. In addition, how to accurately detect faults with a low complexity is still a challenge.

In this paper, we propose a novel low-complexity algorithm named for fault detection in smart cities, which consists of a Strong Tracking Unscented Kalman Filter (), a Modified Bayes’ classification algorithm (), and a Modified Three Sigma test (), aimed to detect both of attenuation type faults and jump type faults. Besides, as a special case of the hypothesis test, can detect Byzantine faults [38]. Note that the message complexity of is such that the lifetime of a smart city network is extended. The details of our contributions are listed as follows:
The rest of the paper is organized as follows. The system model and notions are given in Section 2. The strategies are elaborated in Section 3. Section 4 gives the theoretical analysis on the performance of the . The validation results are presented in this section, as well. We conclude this paper in Section 5.

In this paper, a fault diagnosis model that meets practical production requirements for smart energy network of smart city is considered. The discrete state-space model of which is given as follows: where is a discrete time variable, is a state vector, is an output vector, and denote nonlinear transition functions, and and are uncorrelated, zero-mean, Gaussian white noises with covariance and , respectively. The meter of the smart energy network records consumption of electric energy in certain time intervals and communicates that information to the utility for monitoring and billing. Based on the normal and observed values of different meters, the data is modeled as a normal distribution with specific mean and standard deviation. Due to the harsh environment, each meter may malfunction with a probability p. In this paper, we aim to solve the fault detection problem with a high accuracy and a low message complexity in a nonlinear time-varying stochastic system. All symbols and descriptions throughout the paper are given in Table 1.

3.1. - and -based Centralized Fault Diagnosis

In this section, we introduce the faulty cluster-heads detection algorithm, which is the second phase of the . Specifically, we apply an -based joint estimation method to predict the state and parameter of each cluster-head first; then, the is adopted to find the faulty ones.

First, we introduce fault state related time-varying parameter . Then, joint estimation requires (1) to be rewritten as:
By applying joint estimation of states and parameters, faulty states can be detected. Then, we extent state, noise, and transition as follows:
Substituting Equations (3)–(6) into Equation (2) yields:
It is worth mentioning that can be predicted by [39].

Once we obtain , the is applied to find the faulty cluster-heads. First, we assume obeys the normal distribution when the system is fault-free, which is . If the system suffers from the parameter exception, it can be determined by the following hypothesis test, where is fault-free if holds; otherwise, is faulty. where
To be more specific, for each , the MB is applied to determine the faulty state of . The meter suffers from the parameter bias fault at , only if there exists a such that holds. For the jump type fault, we need to obtain an accurate fault amplitude as follows. If there exists an integer such that for each , , we have then, at , the fault amplitude of is estimated to be
Note that if a smaller is chosen, then faults can be more accurately estimated, which requires much more time, and vice-versa.

In this section, the modified three sigma rule is introduced first, based on which the corresponding decentralized fault diagnosis is given.
The data sensed by can be measured by taking both estimated mean and standard deviation of the data collected from neighbors. Let represent the ratio between its deviation to the estimated mean and standard deviation as follows:
According to the three sigma rule, if , then is considered as faulty; otherwise, is fault-free. However, this rule is unable to detect faulty meters within a lower degree network. The reason is listed as follows. If there exist two suspicious meters and such that , then may be considered fault-free, which is called the “masking” [30]. To solve such a problem, the Median () of the data and the Median Absolute Deviation () are applied, instead of the and , respectively. This is because the actual data value deviate from the faulty meter readings such that the - and -based fault detecting schemes can achieve better accuracy in results. Then, we give the modified three sigma rule as follows.
For a data set sorted in an ascending order, we have
The is defined as follows:
In fact, only the normalized , which is is suitable to replace Standard Deviation () [30]. Then, the absolute error for the modified three sigma test is defined as follows:
It is apparent that the modified three sigma rule defers from the original one only in the choice of the absolute error.
Next, we give the corresponding decentralized fault diagnosis algorithm as follows:
Step 1: For each cluster with a fault-free cluster-head , if , then is fault-free; otherwise, is faulty.
Step 2: For each cluster with a faulty cluster-head , the is applied to such that the fault state of each cluster-member within is detected.
By doing so, we can determine the fault states of at least meters, where △ represents the maximum degree of graph G. The theoretical analysis on the diagnosis accuracy and message complexity is given in the next section. 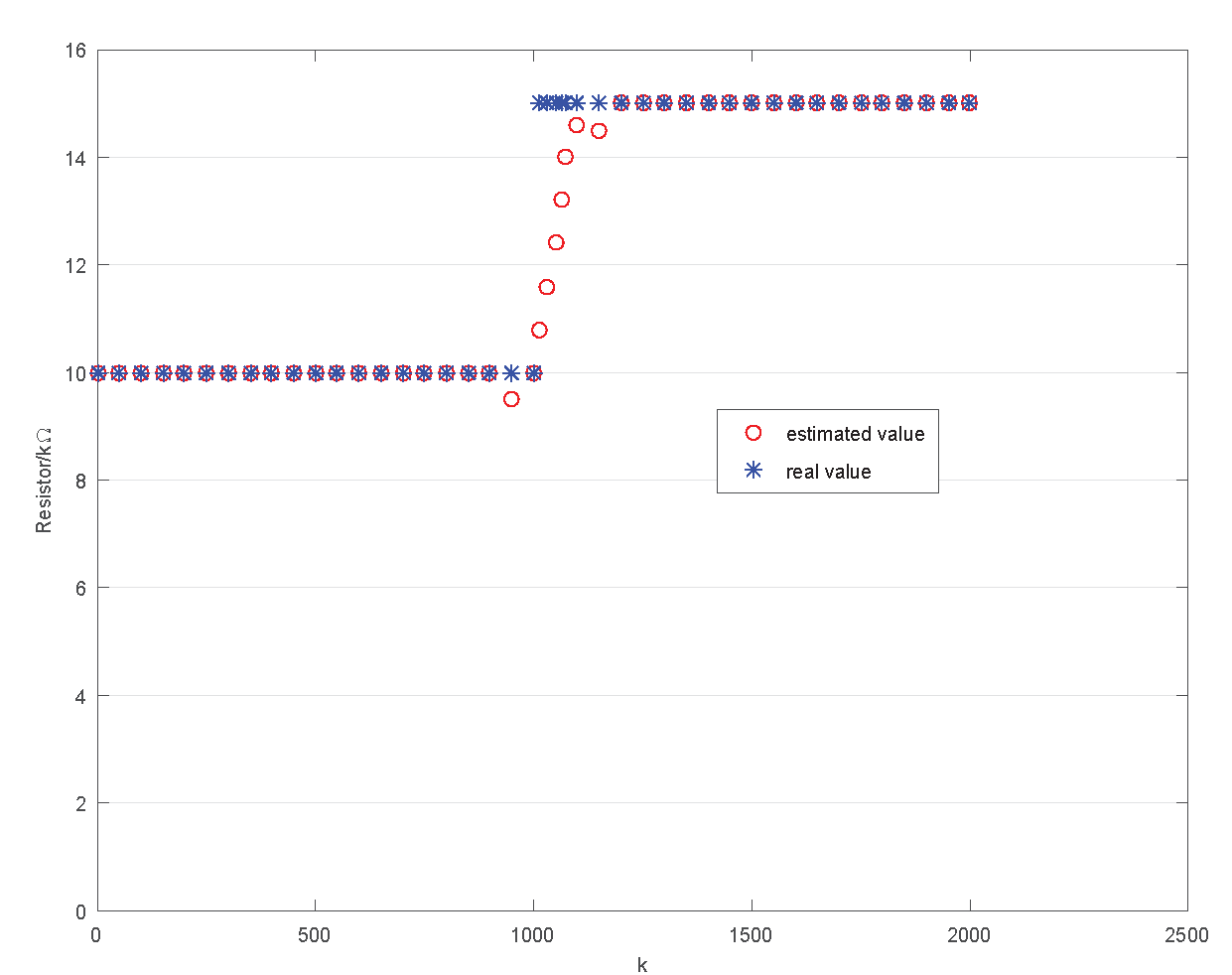 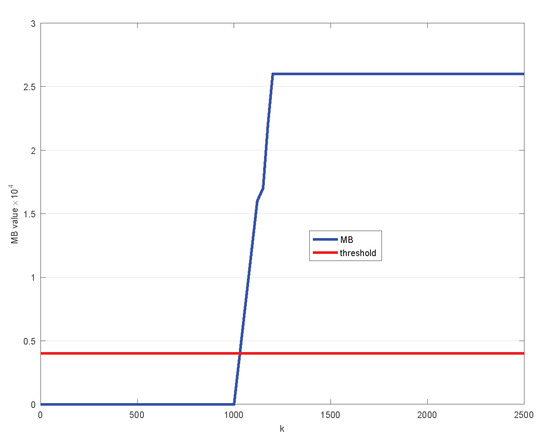 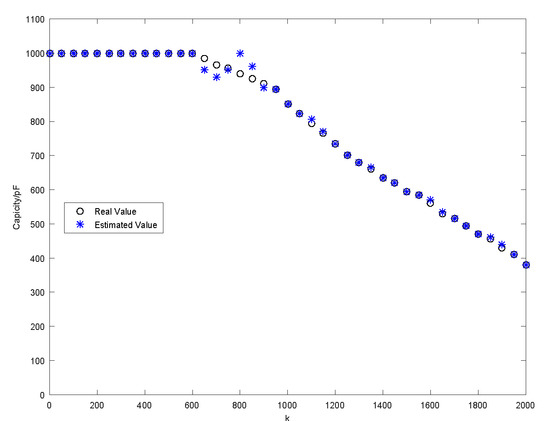 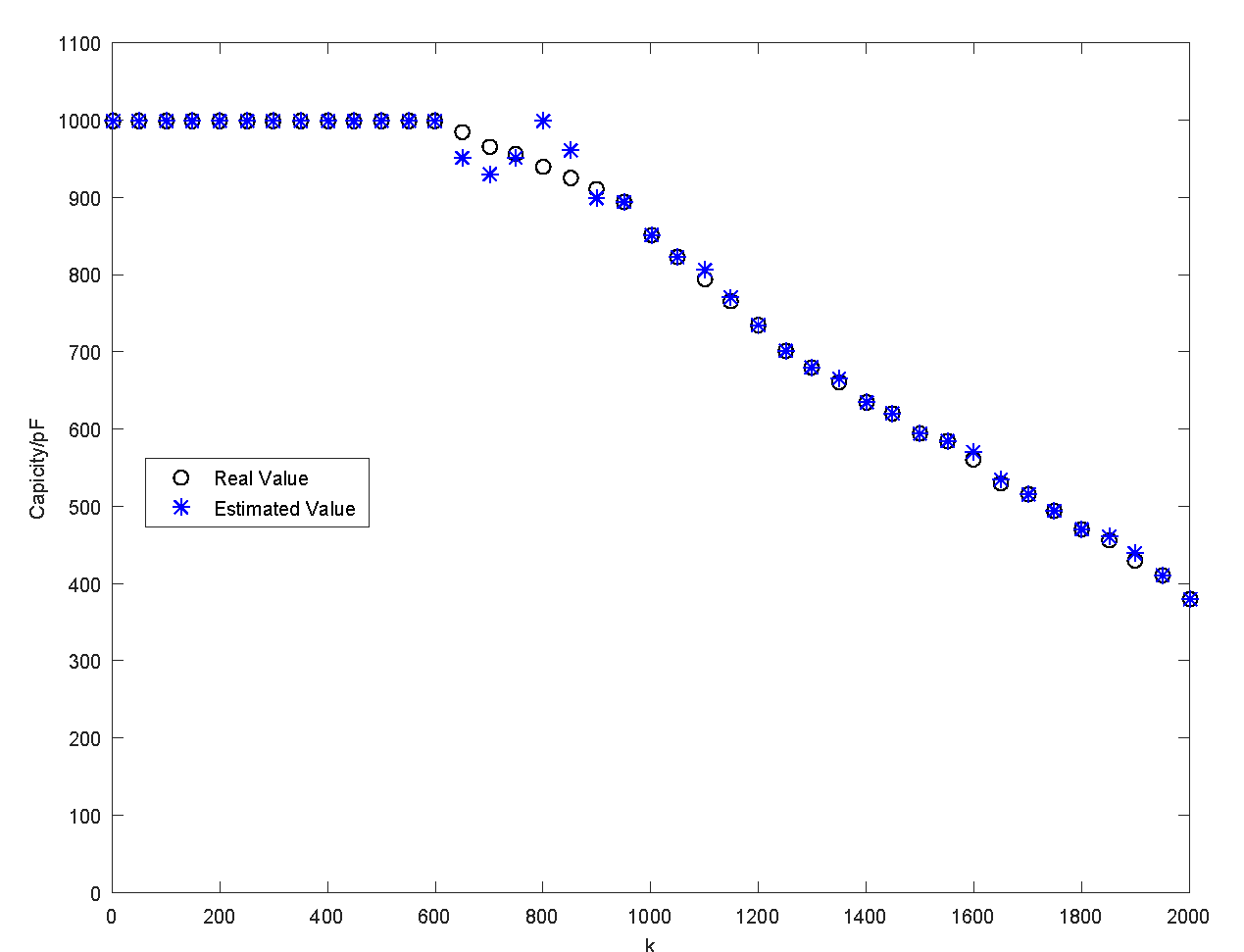 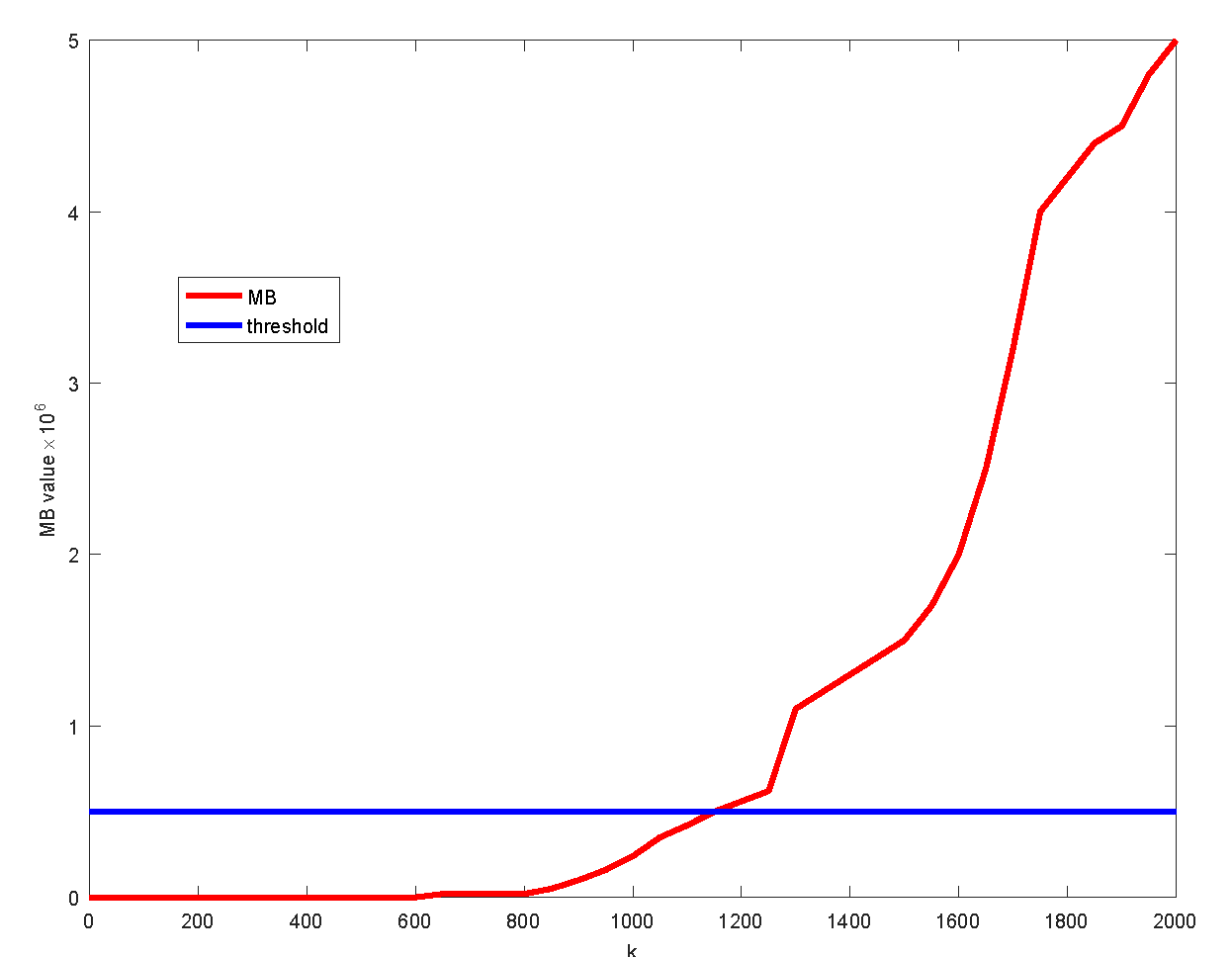 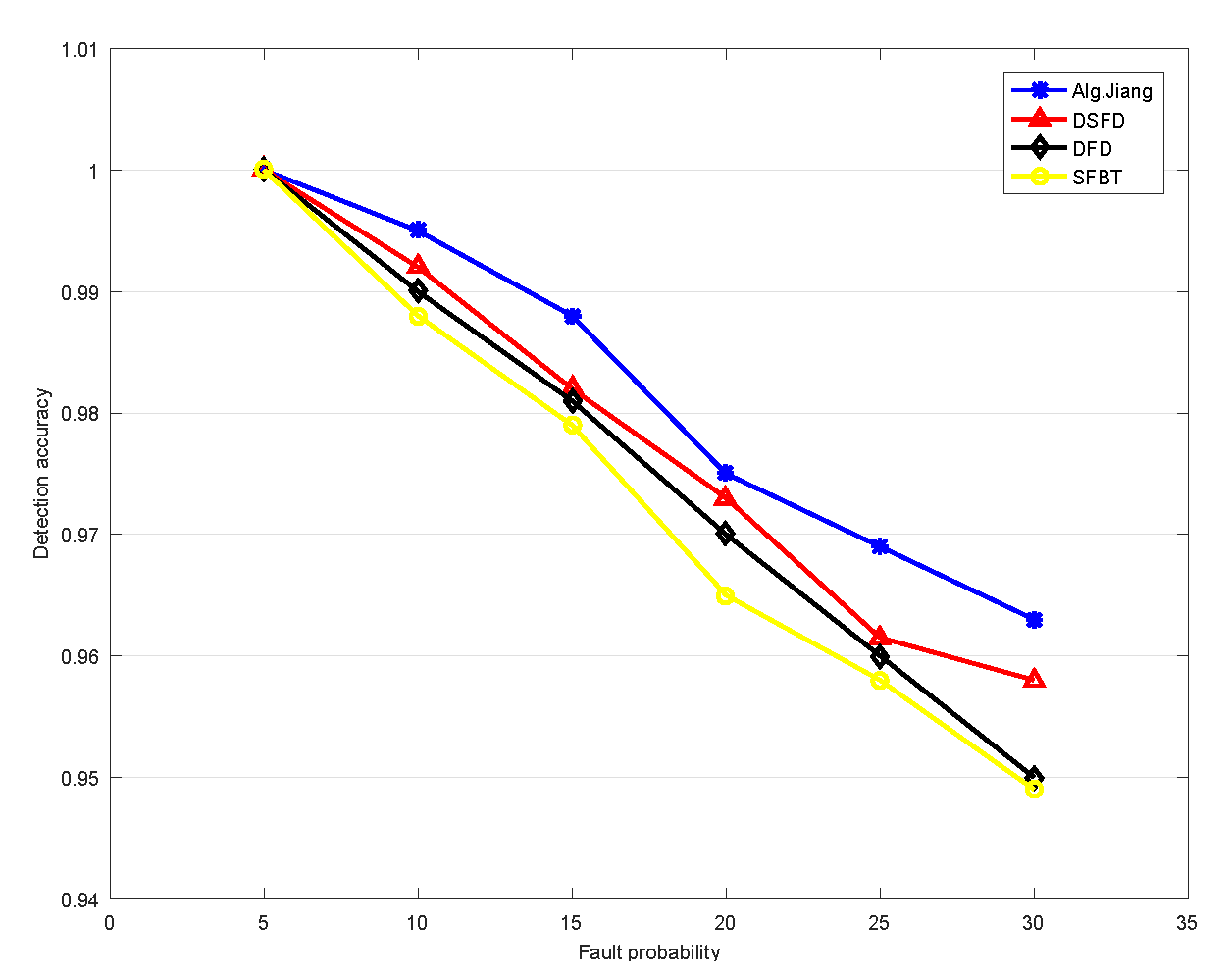 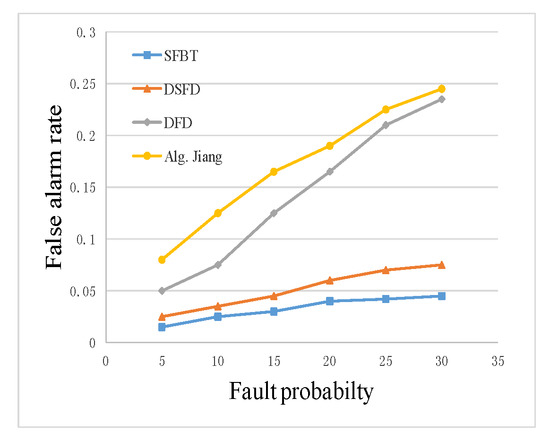 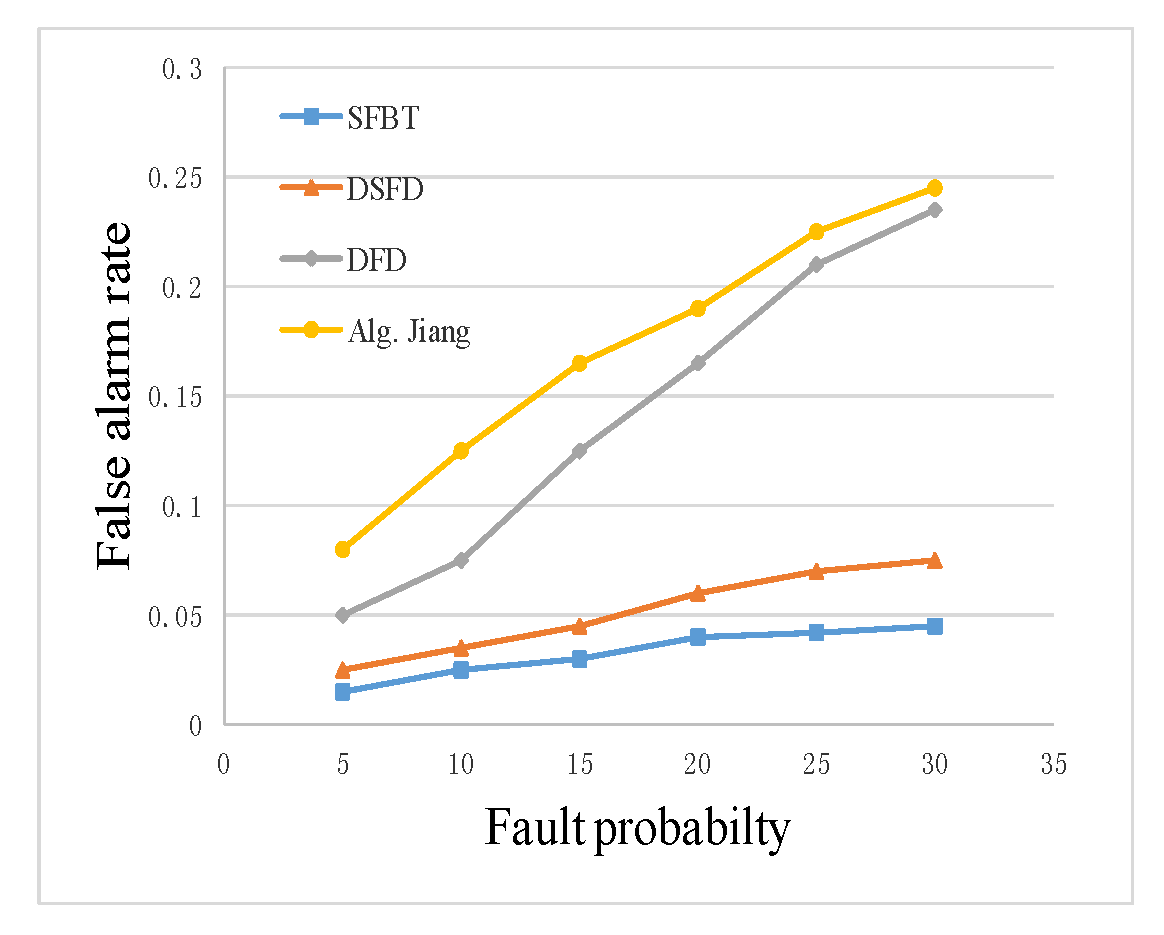 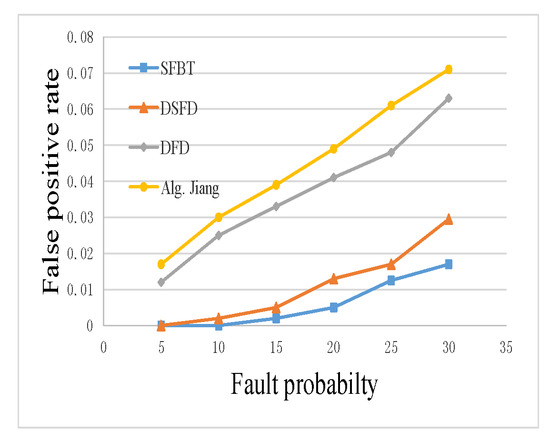 Table 1. Notions.
Table 1. Notions.
© 2020 by the authors. Licensee MDPI, Basel, Switzerland. This article is an open access article distributed under the terms and conditions of the Creative Commons Attribution (CC BY) license (http://creativecommons.org/licenses/by/4.0/).
We use cookies on our website to ensure you get the best experience. Read more about our cookies here.
Accept
We have just recently launched a new version of our website. Help us to further improve by taking part in this short 5 minute survey here. here.
Never show this again