SEO Practices: A Study about the Way News Websites Allow the Users to Comment on Their News Articles

A third of the food produced in the world ends up in the rubbish, enough to put an end to world hunger. On the other hand, society is increasingly concerned to bring healthy eating habits. A RFID (radio frequency identification) food management system is designed to palliate the previously described issues in an Internet of Things (IoT) network paradigm. It consists of RFID readers placed on a user’s kitchen furniture, which automatically reads food information. There is no need for direct sight between reader and tag, as it occurs through the barcode technology. As a complement, a multi-platform web application is developed, allowing its users to check the date of food expiration and other detailed information. The application notifies the user when a product is about to expire. It also offers recipes that might be prepared with available foods, thus preventing them from being wasted. The recipes are accompanied by their nutritional information, so that the user can exhaustively monitor what he/she eats. This embedded system may provide economic benefits to the manufacturer, since it allows supermarkets to pay for displaying their products advertised through the application. After system deployment, design conclusions are shown, and future improvement points are indicated. View Full-Text
Keywords: internet of things; radio frequency identification; food management; recommendation systems; real-time embedded systems internet of things; radio frequency identification; food management; recommendation systems; real-time embedded systems
►▼ Show Figures 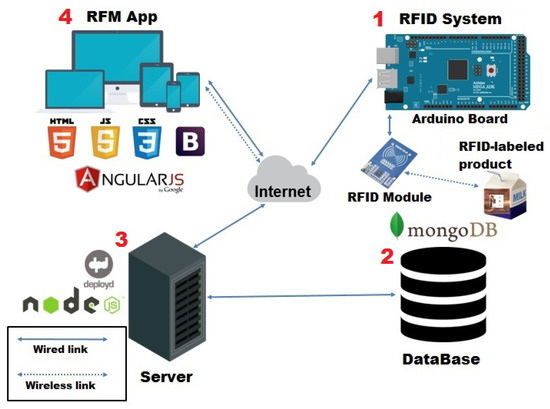