Acknowledgement to Reviewers of Pharmaceutics in 2015
Previous Article in Journal

Introduction to Special Issue: A New Paradigm of Gene Therapy

Circadin 2 mg prolonged-release tablet is the only licensed melatonin product available in the UK. Circadin is indicated for patients with primary insomnia aged 55 and over, but is more widely used “off-label” to treat sleep disorders especially in the paediatric population. Children and older people often have difficulty swallowing tablets and dividing the tablet is sometimes required to ease administration. The aim of this study was to measure the release profile of melatonin from Circadin tablets when divided or crushed, and compare this with release from intact tablets. Dissolution testing was also performed for unlicensed melatonin products for comparison. Dissolution tests were performed using the pharmacopoeial paddle apparatus, with melatonin release analyzed by high performance liquid chromatography. Melatonin content, hardness, friability, and disintegration of the products were also evaluated. The prolonged release of melatonin from Circadin tablets was unlike that of any other product tested. When divided into halves, Circadin preserved most of the prolonged-release characteristic (f2 = 58), whereas quarter-cut and crushed tablet had a more immediate melatonin release profile. Circadin is significantly less expensive and should be preferred to unlicensed medicines which are not pharmaceutically equivalent and offer less quality assurance. View Full-Text
Keywords: sleep; insomnia; paediatric; autism; ADHD; quality control; quality assurance; pharmacoenconomics; controlled release sleep; insomnia; paediatric; autism; ADHD; quality control; quality assurance; pharmacoenconomics; controlled release
►▼ Show Figures 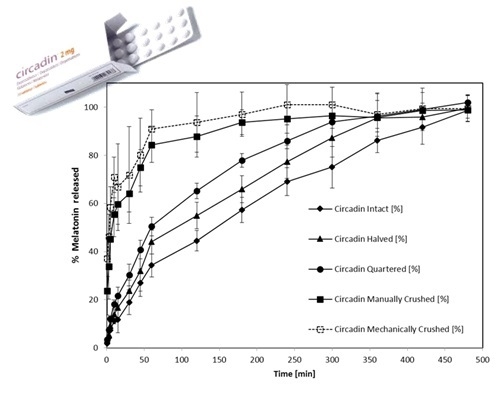