Alopecia areata is a scarless, localized hair loss disorder that is typically treated with topical formulations that ultimately only further irritate the condition. Hence, the goal of this study was to develop a nanoemulsion with a base of garlic oil (GO) and apple cider vinegar (APCV) and loaded with minoxidil (MX) in order to enhance drug solubilization and permeation through skin. A distance coordinate exchange quadratic mixture design was used to optimize the proposed nanoemulsion. Span 20 and Tween 20 mixtures were used as the surfactant, and Transcutol was used as the co-surfactant. The developed formulations were characterized for their droplet size, minoxidil steady-state flux (MX Jss) and minimum inhibitory concentration (MIC) against Propionibacterium acnes. The optimized MX-GO-APCV nanoemulsion had a droplet size of 110 nm, MX Jss of 3 μg/cm2 h, and MIC of 0.275 μg/mL. The optimized formulation acquired the highest ex vivo skin permeation parameters compared to MX aqueous dispersion, and varying formulations lacked one or more components of the proposed nanoemulsion. GO and APCV in the optimized formulation had a synergistic, enhancing activity on the MX permeation across the skin membrane, and the percent permeated increased from 12.7% to 41.6%. Finally, the MX-GO-APCV nanoemulsion followed the Korsmeyer–Peppas model of diffusion, and the value of the release exponent (n) obtained for the formulations was found to be 1.0124, implying that the MX permeation followed Super case II transport. These results demonstrate that the MX-GO-APCV nanoemulsion formulation could be useful in promoting MX activity in treating alopecia areata. View Full-Text
Keywords: minoxidil; garlic oil; nanoemulsion; optimization; alopecia areata; ex vivo permeation minoxidil; garlic oil; nanoemulsion; optimization; alopecia areata; ex vivo permeation
►▼ Show Figures 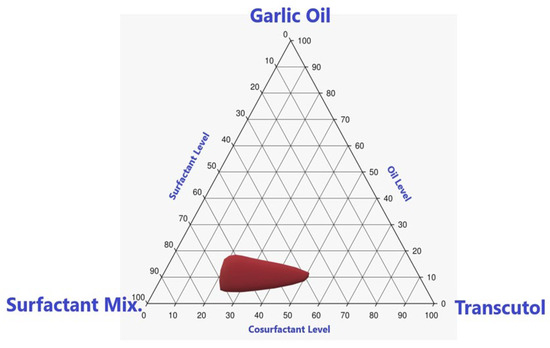