Safety Evaluation of Nanotechnology Products
Next Article in Special Issue

The peptide hormone, angiotensin (Ang-(1–7)), produces anti-inflammatory and protective effects by inhibiting production and expression of many cytokines and adhesion molecules that are associated with a cytokine storm. While Ang-(1–7) has been shown to reduce inflammation and airway hyperreactivity in models of asthma, little is known about the effects of Ang-(1–7) during live respiratory infections. Our studies were developed to test if Ang-(1–7) is protective in the lung against overzealous immune responses during an infection with Mycoplasma pneumonia (Mp), a common respiratory pathogen known to provoke exacerbations in asthma and COPD patients. Wild type mice were treated with infectious Mp and a subset of was given either Ang-(1–7) or peptide-free vehicle via oropharyngeal delivery within 2 h of infection. Markers of inflammation in the lung were assessed within 24 h for each set of animals. During Mycoplasma infection, one high dose of Ang-(1–7) delivered to the lungs reduced neutrophilia and Muc5ac, as well as Tnf- and chemokines (Cxcl1) associated with acute respiratory distress syndrome (ARDS). Despite decreased inflammation, Ang-(1-7)-treated mice also had significantly lower Mp burden in their lung tissue, indicating decreased airway colonization. Ang-(1–7) also had an impact on RAW 264.7 cells, a commonly used macrophage cell line, by dose-dependently inhibiting TNF- production while promoting Mp killing. These new findings provide additional support to the protective role(s) of Ang1-7 in controlling inflammation, which we found to be highly protective against live Mp-induced lung inflammation. View Full-Text
Keywords: angiotensin-(1–7); Mycoplasma pneumoniae; asthma; inflammation; macrophages angiotensin-(1–7); Mycoplasma pneumoniae; asthma; inflammation; macrophages
►▼ Show Figures 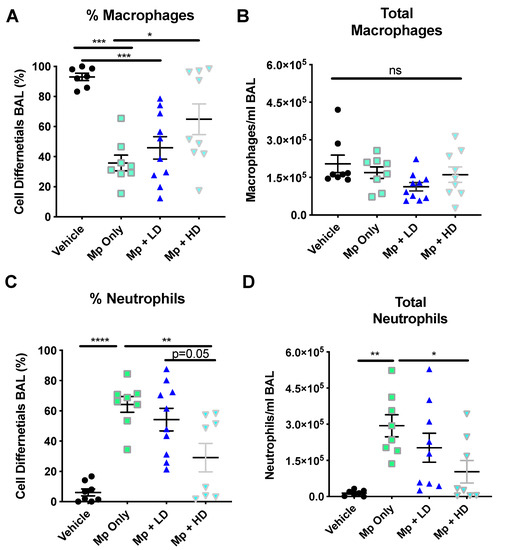