Several in vitro models that mimic different aspects of local skin inflammation exist. The use of ex vivo human skin organ culture (HSOC) has been reported previously. However, comprehensive evaluation of the cytokine secretory capacity of the system and its kinetics has not been performed. Objective: the aim of the current study was to investigate the levels and secretion pattern of key cytokine from human skin tissue upon lipopolysaccharide (LPS) stimulation. HSOC maintained in an air–liquid interface was used. Epidermal and tissue viability was monitored by MTT and Lactate Dehydrogenase (LDH) activity assay, respectively. Cytokine levels were examined by ELISA and multiplex array. HSOCs were treated without or with three different LPS subtypes and the impact on IL-6 and IL-8 secretion was evaluated. The compounds enhanced the secreted levels of both cytokines. However, differences were observed in their efficacy and potency. Next, a kinetic multiplex analysis was performed on LPS-stimulated explants taken from three different donors to evaluate the cytokine secretion pattern during 0–72 h post-induction. The results revealed that the pro-inflammatory cytokines IL-6, IL-8, TNFα and IL-1β were up-regulated by LPS stimuli. IL-10, an anti-inflammatory cytokine, was also induced by LPS, but exhibited a different secretion pattern, peak time and maximal stimulation values. IL-1α and IL-15 showed donor-specific changes. Lastly, dexamethasone attenuated cytokine secretion in five independent repetitions, supporting the ability of the system to be used for drug screening. The collective results demonstrate that several cytokines can be used as valid inflammatory markers, regardless of changes in the secretion levels due to donor’s specific alterations.
Keywords: drug development; biological biomarkers of skin inflammation; cytokine; ex vivo; human skin organ culture; LPS drug development; biological biomarkers of skin inflammation; cytokine; ex vivo; human skin organ culture; LPS

The skin is the largest organ of the human body, primarily acting to maintain homeostasis and protect the body from the deleterious action of the environment. Apart of its vital functions, the skin serves an important role in the defense mechanism against pathogens and possesses immunomodulatory properties [1]. Upon external or internal signals, skin-resident cells, such as Langerhans cells, keratinocytes, melanocytes, mast cells and macrophages, secrete small, hormone-like signal peptides called cytokines that act as local immune modulators or recruit additional immune cells [2]. Their action depends on the presence of specific membrane receptors found on the majority of cells. Though inflammation is a common feature of several skin diseases including psoriasis, atopic dermatitis, seborrheic dermatitis and contact dermatitis [3], the characteristics of the cellular immune response and composition of cytokine profile vary among them [4]. Several in vitro and in vivo models mimic the inflammatory response of the skin [5,6,7,8,9]. Three main in vitro platforms are available: cell cultures (e.g., keratinocyte, Langerhans cells, co-cultures, etc.), 3D reconstructed skin equivalent and human/porcine organ culture (ex vivo models). Cell cultures, stimulated by lipopolysaccharide (LPS) or 12-O-tetradecanoylphorbol-13-acetate (TPA), are routinely-used methods for both gaining basic knowledge of the molecular pathways and regulation of the immune response, and as models for evaluating anti-inflammatory properties of novel agents [10,11]. Commercial 3D-reconstructed skin equivalents are well established and validated models. Still, they suffer from high costs and flexibility that prevents them from being used more often [12]. The usage of ex vivo organ cultures for evaluations is of great interest as, hypothetically, it can mimic the normal local response and the complex interactions between the cellular residents of the epidermis and dermis. Although several excellent studies used this system [13,14], the kinetics and profile of the secreted cytokines are not fully elucidated. Thus, the objective of the current study was to monitor the secreted profile of 15 key cytokines in response to LPS and to assess the benefits and limitations of this experimental system.

The skin tissues were obtained from 37–65-year-old healthy women undergoing aesthetic abdomen surgery, after signing an informed consent form. All experiments were conducted with the approval of the IRB (Helsinki Committee) of Soroka Medical Center, Beer Sheva, Israel. The experiments were initiated at the day of the surgery. Skin culture preparation and treatments were performed under aseptic conditions. A mechanical skin press apparatus was used to section the skin to 0.8 × 0.8 cm2 pieces, as previously described [15]. The skin explants were maintained in an air-liquid interface, dermal side submerged in the medium, as described before [16]. Serum-free Dulbecco’s Modified Eagle Medium (DMEM, 265 mg/L calcium), supplemented with 100 μg/mL penicillin and 100 μg/mL streptomycin, were used.

Following LPS treatment, the epidermis was separated from dermis, and viability was determined, as described before [17]. Briefly, the skin was incubated for 1 min in phosphate-buffered saline (PBS) at 56 °C, after which the epidermis was physically detached from the dermis using forceps and scalpel. The epidermis pieces were then placed in a 96-well plate and incubated with 0.5 mg/mL MTT (3-(4,5-Dimethylthiazol-2-yl)-2,5-diphenyltetrazolium bromide) at 37 °C for 1 h. The samples were then transferred to a new 96-well plate, and isopropanol was added to solubilize the dye. The absorbance was measured in an ELISA reader. In addition, the viability of the skin organ culture was determined by the Lactate Dehydrogenase (LDH Activity Assay Kit; Sigma Aldrich). In this method, used in several skin studies [18,19], tissue damage will increase LDH release into the media and will result in increased conversion of NAD to NADH, which is specifically detected by colorimetric (450 nm) assay.

Following treatments, the spent media of the skin organ culture was collected and centrifuged, and the clear supernatant was stored at −80 °C until analyzed. Cytokine levels (IL-6 and IL-8) were evaluated by commercial ELISA, according to the manufacturer’s instructions (Biolegend, San Diego, CA, USA). All other cytokine levels were determined by multiplex analysis (Quansys Biosciences, London, UK).

The impact of three types of LPS ((1) E.coli O111:B4; (2) Salmonella enterica serotype enteritidis; (3) Salmonella enterica serotype typhimurium) was evaluated ex vivo, in the human skin organ culture system (HSOC). The skin explants were treated without or with increasing concentrations of LPS for 48 h following incubation, and the epidermal viability and IL-6 and IL-8 secreted levels were evaluated, as written in the Materials and Methods section. As shown in Figure 1 A–C, all compounds were well tolerated by the skin explants and showed no toxic effect. In addition, to exclude dermal damage, lactate dehydrogenase activity assay was performed. The results confirmed that all LPS preparations were well tolerated by the organ culture (Figure 1D–F). Importantly, all LPS subtypes tested enhanced IL-6 and IL-8 secretion in a dose-dependent manner. Although LPS-III showed the highest potency, LPS-I had the highest efficacy, resulting in increased levels of IL-6 and IL-8 by 8.3- and 5.5-fold, respectively.
Next, a time-course analysis was performed upon treatment with LPS-I (5 µg/mL). The kinetic secretion profiles of IL-6, IL-8, TNFα, IL-1β, IL-10, IL-1α and IL-15 over 72 h are shown in Figure 2. The skin organ remained vital throughout the treatment (Figure 2A,B). Of note, the levels of IL-2, IL-4, IL-5, IL-12, IL-13, IL-23 and TNFβ were below the detection level in these experimental parameters. One can observe that the basal levels of IL-6 and IL-8 are predominant in the HSOC system. Upon LPS stimulation, IL-6 reached its highest levels within 24 h (Figure 2, upper-right panel), whereas IL-8 levels increased rapidly during the first 6 h and continued to accumulate for up to 72 h, the maximum tested duration. The secreted levels of TNFα peaked at 9 h, and then declined over time. Still, they remained elevated in comparison to the untreated control group also after 72 h. It should be emphasized that although the basal levels of TNFα were similar in all three donors, they differed greatly upon stimulation. Nonetheless, the dynamic reaction to LPS showed similar patterns. This phenomenon was also observed in the case of IL-1β, which despite differences among donors, showed consistent increases in cytokine levels throughout the experiment. The levels of IL-10 showed a time-dependent elevation at 24 h. After 72 h of incubation with LPS, a significant discrepancy was observed between replications, making it difficult to relate to the nature of the cytokine dynamics. The secretion of IL-15 and IL-1α were unaltered in this experimental system, excluding a rapid and massive accumulation of IL-1α in a single skin donor (6 h, Figure 2, lower panel).
Lastly, the impact of Dexamethasone on IL-6 and IL-8 secretion levels in stimulated skin explants was evaluated. Dexamethasone was added concomitantly with LPS. After 48 h, the secreted levels of both cytokines were monitored. As expected, IL-6 and IL-8 levels were enhanced by the LPS stimuli, resulting in approximately 3.5- and 3.9-fold increase, respectively (Figure 3). Importantly, dexamethasone effectively attenuated the hypersecretion of both cytokines, which strengthens the validity of the experimental system.

R.G. and G.C. performed the experiments. All co-authors contributed to work design and data interpolation. G.C. and N.O.-S. have written the manuscript. All authors have read and agreed to the published version of the manuscript.

This study was supported by an ADSSC faculty grant for G.C. All authors are partially supported by the ministry of science and technology, ICA foundation and Clinic Lemon donations. 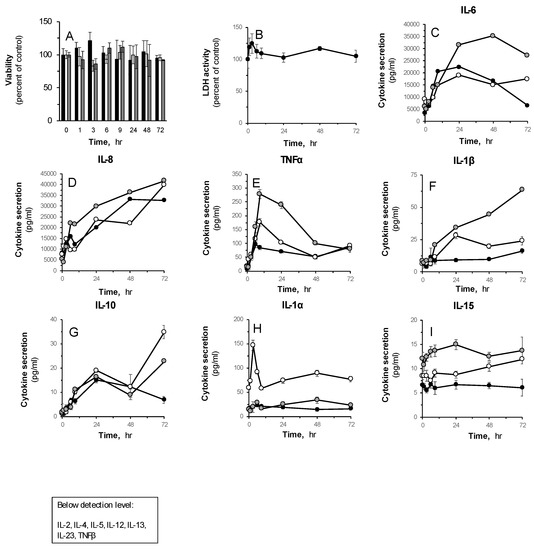