Erythrocytes as Carriers: From Drug Delivery to Biosensors
Next Article in Special Issue

For many chronic fibrotic conditions, there is a need for local, sustained antifibrotic drug delivery. A recent trend in the pharmaceutical industry is the repurposing of approved drugs. This paper investigates drugs that are classically used for anthelmintic activity (pyrvinium pamoate (PYR)), inhibition of adrenal steroidgenesis (metyrapone (MTP)), bactericidal effect (rifampicin (RIF), and treating iron/aluminum toxicity (deferoxamine mesylate (DFOA)), but are also under investigation for their potential positive effect in wound healing. In this role, they have not previously been tested in a localized delivery system suitable for obtaining the release for the weeks-to-months timecourse needed for wound resolution. Herein, two cyclodextrin-based polymer systems, disks and microparticles, are demonstrated to provide the long-term release of all four tested non-conventional wound-healing drugs for up to 30 days. Higher drug affinity binding, as determined from PyRx binding simulations and surface plasmon resonance in vitro, corresponded with extended release amounts, while drug molecular weight and solubility correlated with the improved drug loading efficiency of cyclodextrin polymers. These results, combined, demonstrate that leveraging affinity interactions, in combination with drug choice, can extend the sustained release of drugs with an alternative, complimentary action to resolve wound-healing and reduce fibrotic processes. View Full-Text
Keywords: controlled release; chronic disease; pharmaceuticals; small molecules; localized therapy controlled release; chronic disease; pharmaceuticals; small molecules; localized therapy
►▼ Show Figures 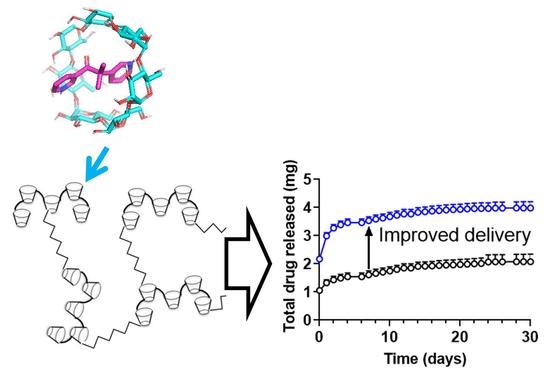 
Rohner, Nathan A.; Nguyen, Dung; von Recum, Horst A. 2020. "Affinity Effects on the Release of Non-Conventional Antifibrotics from Polymer Depots." Pharmaceutics 12, no. 3: 275.