What Do We Know about How Hantaviruses Interact with Their Different Hosts?
Next Article in Special Issue

Virus infection frequently modifies plant phenotypes, leading to changes in behaviour and performance of their insect vectors in a way that transmission is enhanced, although this may not always be the case. Here, we investigated Bemisia tabaci response to tomato plants infected by Tomato chlorosis virus (ToCV), a non-circulative-transmitted crinivirus, and Tomato severe rugose virus (ToSRV), a circulative-transmitted begomovirus. Moreover, we examined the role of visual and olfactory cues in host plant selection by both viruliferous and non-viruliferous B. tabaci. Visual cues alone were assessed as targets for whitefly landing by placing leaves underneath a Plexiglas plate. A dual-choice arena was used to assess whitefly response to virus-infected and mock-inoculated tomato leaves under light and dark conditions. Thereafter, we tested the whitefly response to volatiles using an active air-flow Y-tube olfactometer, and chemically characterized the blends using gas chromatography coupled to mass spectrometry. Visual stimuli tests showed that whiteflies, irrespective of their infectious status, always preferred to land on virus-infected rather than on mock-inoculated leaves. Furthermore, whiteflies had no preference for either virus-infected or mock-inoculated leaves under dark conditions, but preferred virus-infected leaves in the presence of light. ToSRV-infection promoted a sharp decline in the concentration of some tomato volatiles, while an increase in the emission of some terpenes after ToCV infection was found. ToSRV-viruliferous whiteflies preferred volatiles emitted from mock-inoculated plants, a conducive behaviour to enhance virus spread, while volatiles from ToCV-infected plants were avoided by non-viruliferous whiteflies, a behaviour that is likely detrimental to the secondary spread of the virus. In conclusion, the circulative persistent begomovirus, ToSRV, seems to have evolved together with its vector B. tabaci to optimise its own spread. However, this type of virus-induced manipulation of vector behaviour was not observed for the semi persistent crinivirus, ToCV, which is not specifically transmitted by B. tabaci and has a much less intimate virus-vector relationship. View Full-Text
Keywords: whitefly vector; Tomato chlorosis virus; Tomato severe rugose virus; plant volatiles; vector-borne plant viruses; host plant selection whitefly vector; Tomato chlorosis virus; Tomato severe rugose virus; plant volatiles; vector-borne plant viruses; host plant selection
►▼ Show Figures 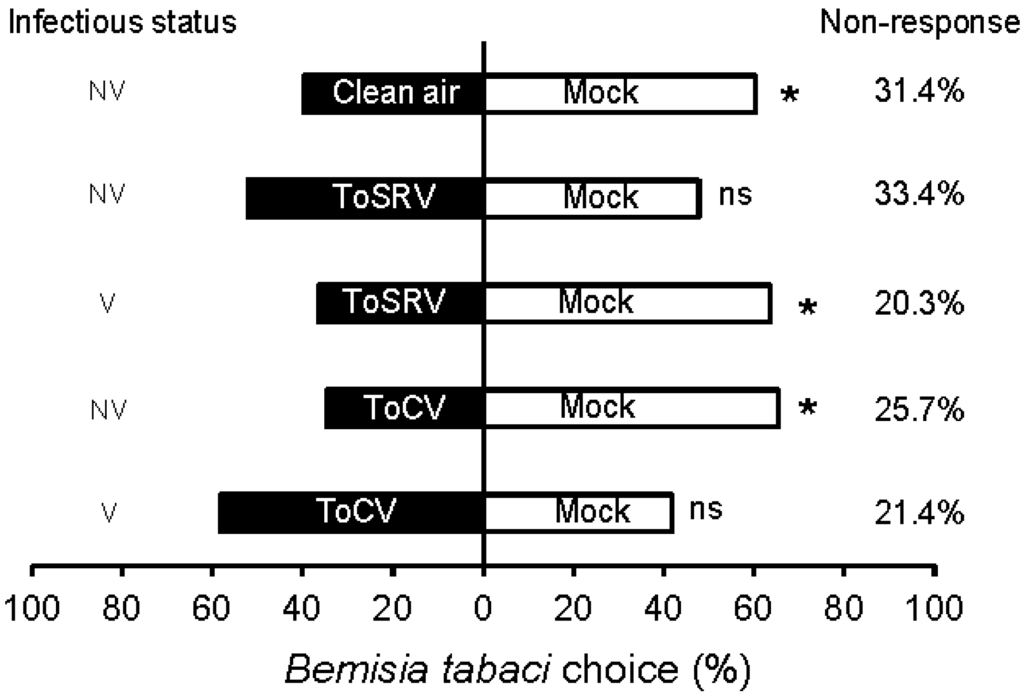