There have been large numbers of studies on anti-HEV IgG seroprevalence in Europe, however, the results of these studies have produced high variability of seroprevalence rates, making interpretation increasingly problematic. Therefore, the aim of this study was to develop a clearer understanding of anti-HEV IgG seroprevalence in Europe and identify risk groups for HEV exposure by a meta-analysis of published studies. Methods: All European HEV-seroprevalence studies from 2003 to 2015 were reviewed. Data were stratified by assay, geographical location, and patient cohort (general population, patients with HIV, solid-organ transplant recipients, chronic liver disease patients, and individuals in contact with swine/wild animals). Data were pooled using a mixed-effects model. Results: Four hundred thirty-two studies were initially identified, of which 73 studies were included in the analysis. Seroprevalence estimates ranged from 0.6% to 52.5%, increased with age, but were unrelated to gender. General population seroprevalence varied depending on assays: Wantai (WT): 17%, Mikrogen (MG): 10%, MP-diagnostics (MP): 7%, DiaPro: 4%, Abbott 2%. The WT assay reported significantly higher seroprevalence rates across all cohorts (p < 0.001). Individuals in contact with swine/wild animals had significantly higher seroprevalence rates than the general population, irrespective of assay (p < 0.0001). There was no difference between any other cohorts. The highest seroprevalence was observed in France (WT: 32%, MP: 16%) the lowest in Italy (WT: 7.5%, MP 0.9%). Seroprevalence varied between and within countries. The observed heterogeneity was attributed to geographical region (23%), assay employed (23%) and study cohort (7%). Conclusion: Seroprevalcence rates primarily depend on the seroassy that is used, followed by the geographical region and study cohort. Seroprevalence is higher in individuals exposed to swine and/or wild animals, and increases with age. View Full-Text
Keywords: hepatitis E; serosurvey; seroprevalence; Europe; developing countries; genotype 3; assay; anti-HEV IgG hepatitis E; serosurvey; seroprevalence; Europe; developing countries; genotype 3; assay; anti-HEV IgG
►▼ Show Figures 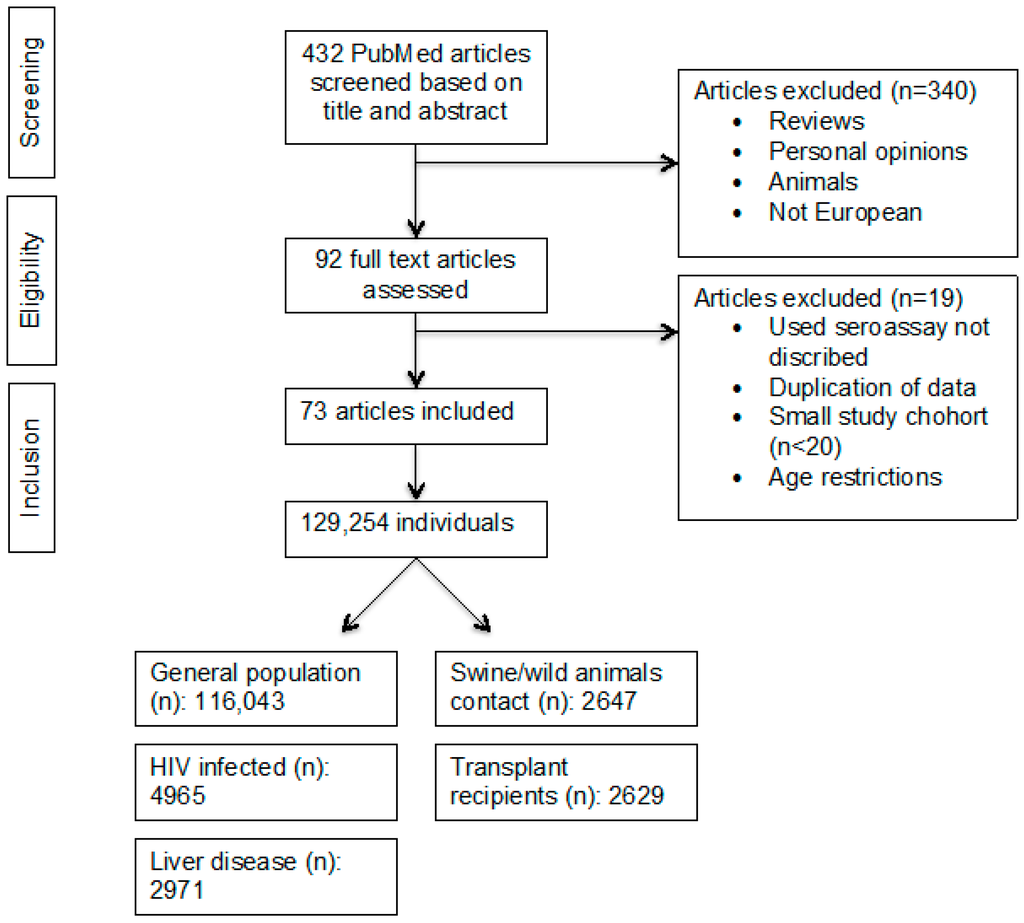