In all eukaryotic cells, the nucleus forms a prominent cellular compartment containing the cell’s nuclear genome. Although structurally similar, animal and plant nuclei differ substantially in details of their architecture. One example is the nuclear lamina, a layer of tightly interconnected filament proteins (lamins) underlying the nuclear envelope of metazoans. So far no orthologous lamin genes could be detected in plant genomes and putative lamin-like proteins are only poorly described in plants. To probe for potentially conserved features of metazoan and plant nuclear envelopes, we ectopically expressed the core nuclear egress proteins of human cytomegalovirus pUL50 and pUL53 in plant cells. pUL50 localizes to the inner envelope of metazoan nuclei and recruits the nuclear localized pUL53 to it, forming heterodimers. Upon expression in plant cells, a very similar localization pattern of both proteins could be determined. Notably, pUL50 is specifically targeted to the plant nuclear envelope in a rim-like fashion, a location to which coexpressed pUL53 becomes strictly corecruited from its initial nucleoplasmic distribution. Using pUL50 as bait in a yeast two-hybrid screening, the cytoplasmic re-initiation supporting protein RISP could be identified. Interaction of pUL50 and RISP could be confirmed by coexpression and coimmunoprecipitation in mammalian cells and by confocal laser scanning microscopy in plant cells, demonstrating partial pUL50-RISP colocalization in areas of the nuclear rim and other intracellular compartments. Thus, our study provides strong evidence for conserved structural features of plant and metazoan nuclear envelops and identifies RISP as a potential pUL50-interacting plant protein. View Full-Text
Keywords: human cytomegalovirus; pUL50; pUL53; nuclear envelope; plant cells; re-initiation supporting protein RISP human cytomegalovirus; pUL50; pUL53; nuclear envelope; plant cells; re-initiation supporting protein RISP
►▼ Show Figures 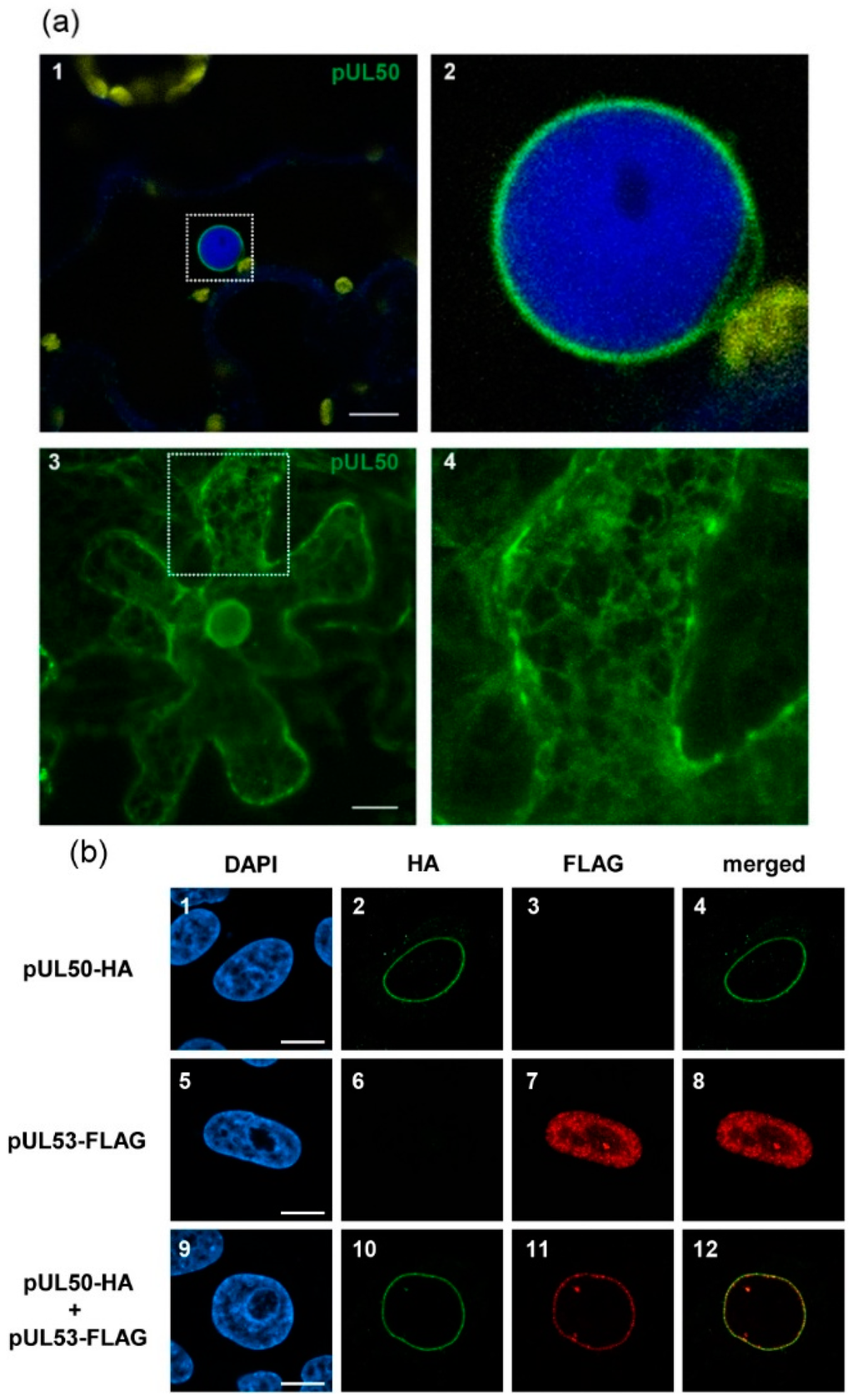