Bacteriophage T5, a Siphovirus belonging to the order Caudovirales, has a flexible, three-fold symmetric tail, to which three L-shaped fibres are attached. These fibres recognize oligo-mannose units on the bacterial cell surface prior to infection and are composed of homotrimers of the pb1 protein. Pb1 has 1396 amino acids, of which the carboxy-terminal 133 residues form a trimeric intra-molecular chaperone that is auto-proteolyzed after correct folding. The structure of a trimer of residues 970–1263 was determined by single anomalous dispersion phasing using incorporated selenomethionine residues and refined at 2.3 Å resolution using crystals grown from native, methionine-containing, protein. The protein inhibits phage infection by competition. The phage-distal receptor-binding domain resembles a bullet, with the walls formed by partially intertwined beta-sheets, conferring stability to the structure. The fold of the domain is novel and the topology unique to the pb1 structure. A site-directed mutant (Ser1264 to Ala), in which auto-proteolysis is impeded, was also produced, crystallized and its 2.5 Å structure solved by molecular replacement. The additional chaperone domain (residues 1263–1396) consists of a central trimeric alpha-helical coiled-coil flanked by a mixed alpha-beta domain. Three long beta-hairpin tentacles, one from each chaperone monomer, extend into long curved grooves of the bullet-shaped domain. The chaperone-containing mutant did not inhibit infection by competition. View Full-Text
Keywords: bacterial viruses; Caudovirales; Siphoviridae; crystallography; infection; J0101 bacterial viruses; Caudovirales; Siphoviridae; crystallography; infection; J0101
►▼ Show Figures 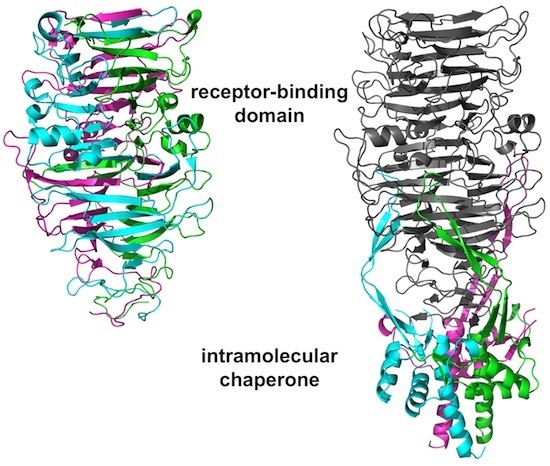