Background: indeterminate Western blot (WB) patterns are a major concern for diagnosis of human T-cell lymphotropic virus type 1 (HTLV-1) infection, even in non-endemic areas. Objectives: (a) to define the prevalence of indeterminate WB among different populations from Argentina; (b) to evaluate if low proviral load (PVL) is associated with indeterminate WB profiles; and (c) to describe mutations in LTR and tax sequence of these cases. Results: Among 2031 samples, 294 were reactive by screening. Of them, 48 (16.3%) were WB indeterminate and of those 15 (31.3%) were PCR+. Quantitative real-time PCR (qPCR) was performed to 52 HTLV-1+ samples, classified as Group 1 (G1): 25 WB+ samples from individuals with pathologies; Group 2 (G2): 18 WB+ samples from asymptomatic carriers (AC); and Group 3 (G3): 9 seroindeterminate samples from AC. Median PVL was 4.78, 2.38, and 0.15 HTLV-1 copies/100 PBMCs, respectively; a significant difference (p=0.003) was observed. Age and sex were associated with PVL in G1 and G2, respectively. Mutations in the distal and central regions of Tax Responsive Elements (TRE) 1 and 2 of G3 were observed, though not associated with PVL.The 8403A>G mutation of the distal region, previously related to high PVL, was absent in G3 but present in 50% of WB+ samples (p = 0.03). Conclusions: indeterminateWBresults confirmed later as HTLV-1 positive may be associated with low PVL levels. Mutations in LTR and tax are described; their functional relevance remains to be determined. View Full-Text
Keywords: HTLV-1/2; proviral load; Western blot; indeterminate; mutations HTLV-1/2; proviral load; Western blot; indeterminate; mutations
►▼ Show Figures 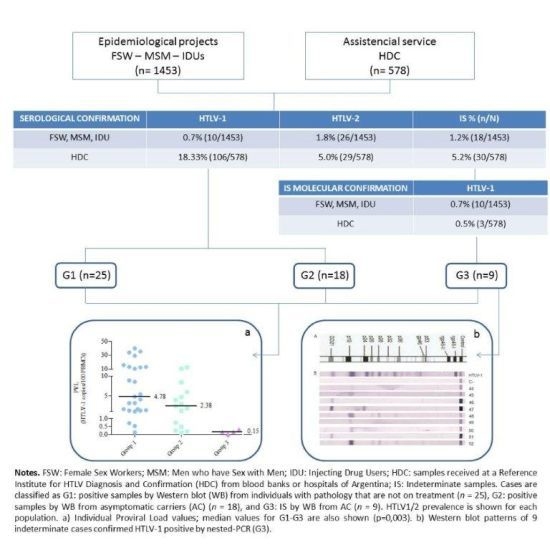