Inovirus-associated vectors (IAVs) are engineered, non-lytic, filamentous bacteriophages that are assembled primarily from thousands of copies of the major coat protein gp8 and just five copies of each of the four minor coat proteins gp3, gp6, gp7 and gp9. Inovirus display studies have shown that the architecture of inoviruses makes all coat proteins of the inoviral particle accessible to the outside. This particular feature of IAVs allows foreign antigenic peptides to be displayed on the outer surface of the virion fused to its coat proteins and for more than two decades has been exploited in many applications including antibody or peptide display libraries, drug design, and vaccine development against infectious and non-infectious diseases. As vaccine carriers, IAVs have been shown to elicit both a cellular and humoral response against various pathogens through the display of antibody epitopes on their coat proteins. Despite their high immunogenicity, the goal of developing an effective vaccine against HIV-1 has not yet materialized. One possible limitation of previous efforts was the use of broadly neutralizing antibodies, which exhibited autoreactivity properties. In the past five years, however, new, more potent broadly neutralizing antibodies that do not exhibit autoreactivity properties have been isolated from HIV-1 infected individuals, suggesting that vaccination strategies aimed at producing such broadly neutralizing antibodies may confer protection against infection. The utilization of these new, broadly neutralizing antibodies in combination with the architectural traits of IAVs have driven the current developments in the design of an inovirus-based vaccine against HIV-1. This article reviews the applications of IAVs in vaccine development, with particular emphasis on the design of inoviral-based vaccines against HIV-1.
Keywords: HIV-1 vaccine; inovirus; inovirus display; phage display; viral vectors; antigen display; inovirus-associated vectors HIV-1 vaccine; inovirus; inovirus display; phage display; viral vectors; antigen display; inovirus-associated vectors

The easy genetic manipulation of inoviruses and the possibility of inserting random oligonucleotides into their genome set the foundation for inovirus display (phage display) technology [37,38]. Expression of these genetically modified inoviruses results in the presentation of oligopeptides as fusion proteins on the surface of the virion and are herein termed IAVs for inovirus-associated vectors. IAVs can be modified to express an oligopeptide on either all or on some copies of a particular capsid protein. One possibility is to insert an oligonucleotide sequence of interest in the viral genome to create a fusion with capsid protein gp3, gp7, gp8 or gp9, so that the oligopeptide is displayed on every copy of the capsid protein. Alternatively, a phagemid vector can be used, which carries an extra copy of a capsid protein to which the oligonucleotide is fused. Coinfection of bacterial hosts with the phagemid vector and a replication deficient helper phage, that carries the wild type capsid protein, would result in mosaic inovirus particles. That is, they will contain copies of both the wild type coat protein and the recombinant protein that contains the oligopeptide of interest [39]. Non-mosaic and mosaic IAVs that display a peptide on gp3 or gp8 have been recently reviewed [4] while IAVs that display a peptide on gp7 or gp9 have been reviewed elsewhere [40,41,42]. In contrast to the other four-capsid proteins, gp6 capsid protein has only been utilized for the production of mosaic virions [43,44,45]. Figure 2 illustrates the display of an antigen on each of the five capsid proteins of an IAV as indicated in published literature. It also introduces a new terminology to denote the gene to which the oligopeptides are fused to and whether the virion is a mosaic. To display many copies of an oligopeptide on an IAV, the ideal capsid protein to utilize is gp8. The resulting non-mosaic IAV can display a peptide on each of the approximately 2700 copies of gp8 on its capsid surface. The tradeoff, however, is a significant limitation in the size of the peptide: only peptides up to 6 amino acids may be displayed without distorting the assembly of the virus (see Figure 2 and Figure 3). This size restriction of the displayed peptide may be overcome by generating a mosaic IAV that displays the foreign peptide in only a minority of gp8 on the viral surface [38]. With regards to the display of peptides on gp3, it is possible through mosaic IAVs to present even a whole protein on the viral surface [46]. Although in such a case the protein is expected to be present in up to five copies per virion, studies show that virions carry none, or just one copy of the protein on their surface [39].
Random Peptide Libraries (RPL) is one common application of IAVs, where random oligopeptides are displayed on different clones of an inovirus particle. The vast diversity of an RPL depends on the size of the oligopeptide where the complexity of an RPL increases exponentially as the size of the oligopeptide increases. RPLs can subsequently be used in many applications including the identification of peptide ligands by receptors, the mapping of substrate sites for enzymes, and the creation of antibody peptide libraries. These applications are reviewed elsewhere [38,46,47]. Inovirus display technology has also been used for epitope mapping and vaccine design purposes. RPLs can be used to characterize the epitope of an antibody of interest through biopanning with a monoclonal antibody of interest, which can result in the isolation of mimotopes; these are oligopeptides that mimic the native antibody epitope. The selected recombinant inoviruses that carry mimotopes can then be isolated in order to determine the DNA and amino acid sequence of the displayed oligopeptides. DNA sequencing of such inserts as well as structure prediction analysis can potentially identify the previously unknown target of an antibody. Besides antibody characterization, inoculation of recombinant inoviruses isolated through this approach can potentially be used as vaccine carriers. For example, if a neutralizing antibody against a pathogen is used to screen an RPL, the selected peptides (fused to inoviruses) would mimic the original antibody epitope. Vaccination of animals with these inoviruses could ultimately induce the production of similar antibodies by the vaccinated individual, offering protection from infection against the pathogen. Inovirus display technology has been successfully applied in the development of vaccines against various pathogens (Table 1 and Table 2). The potential for inovirus display technology to facilitate the mapping of antibody epitopes is of great importance, especially in the case of HIV-1. Epitopes of broadly neutralizing monoclonal anti-HIV-1 antibodies could be rare, vulnerable spots on the surface of a frequently mutating virus such as HIV-1 and therefore, their identification and further study could lead to new drug therapies or vaccine targets. This review focuses particularly on the applications of inovirus display technology that utilizes capsid proteins gp3 and gp8, as those have been used in vaccine development. 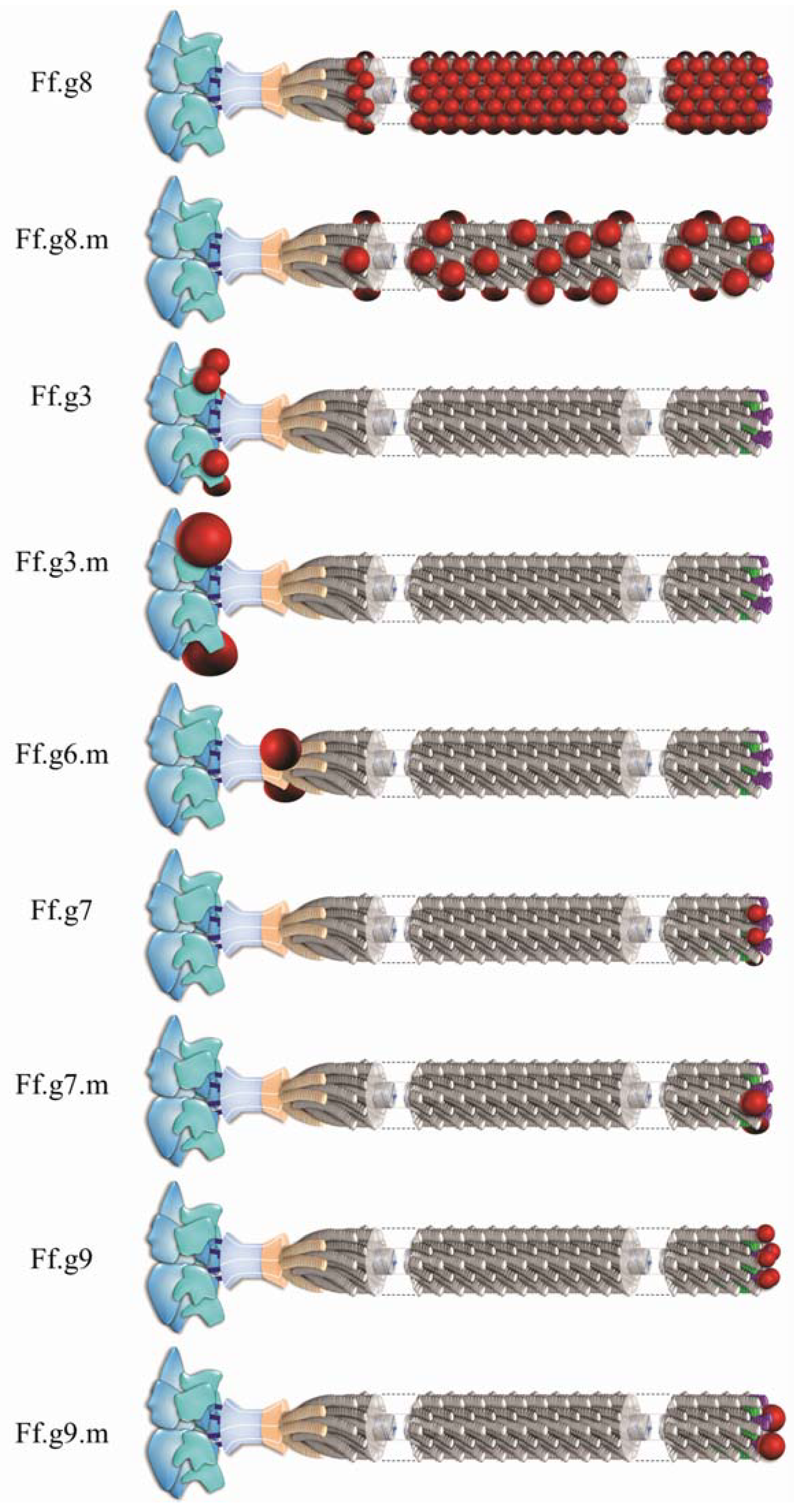 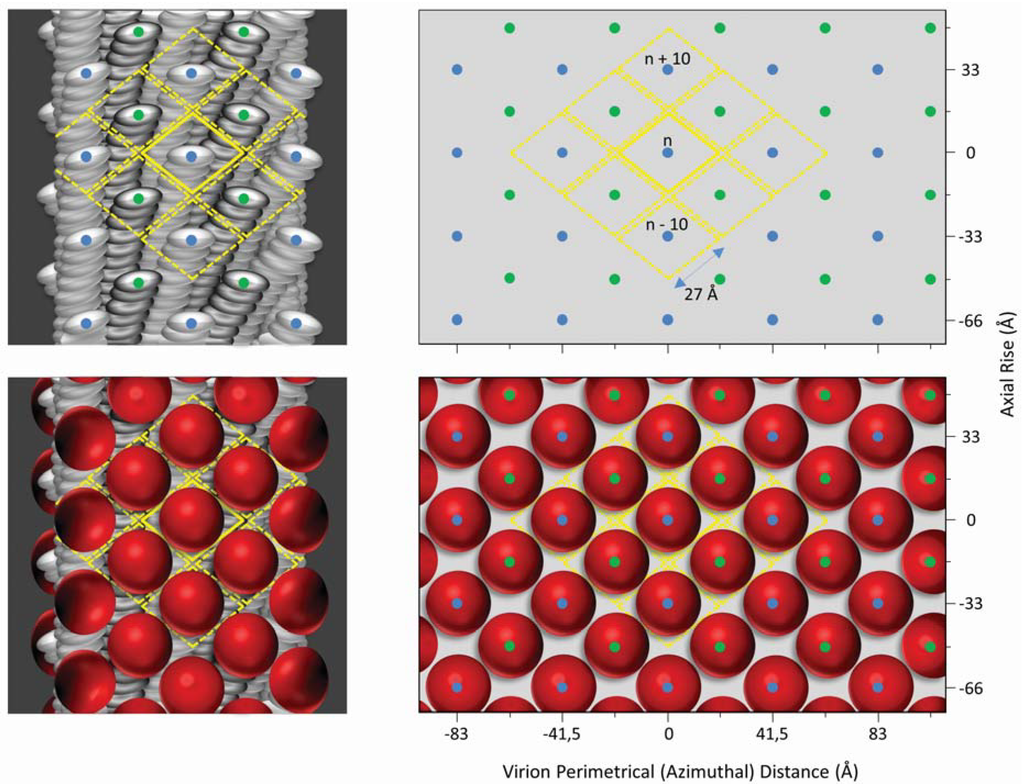 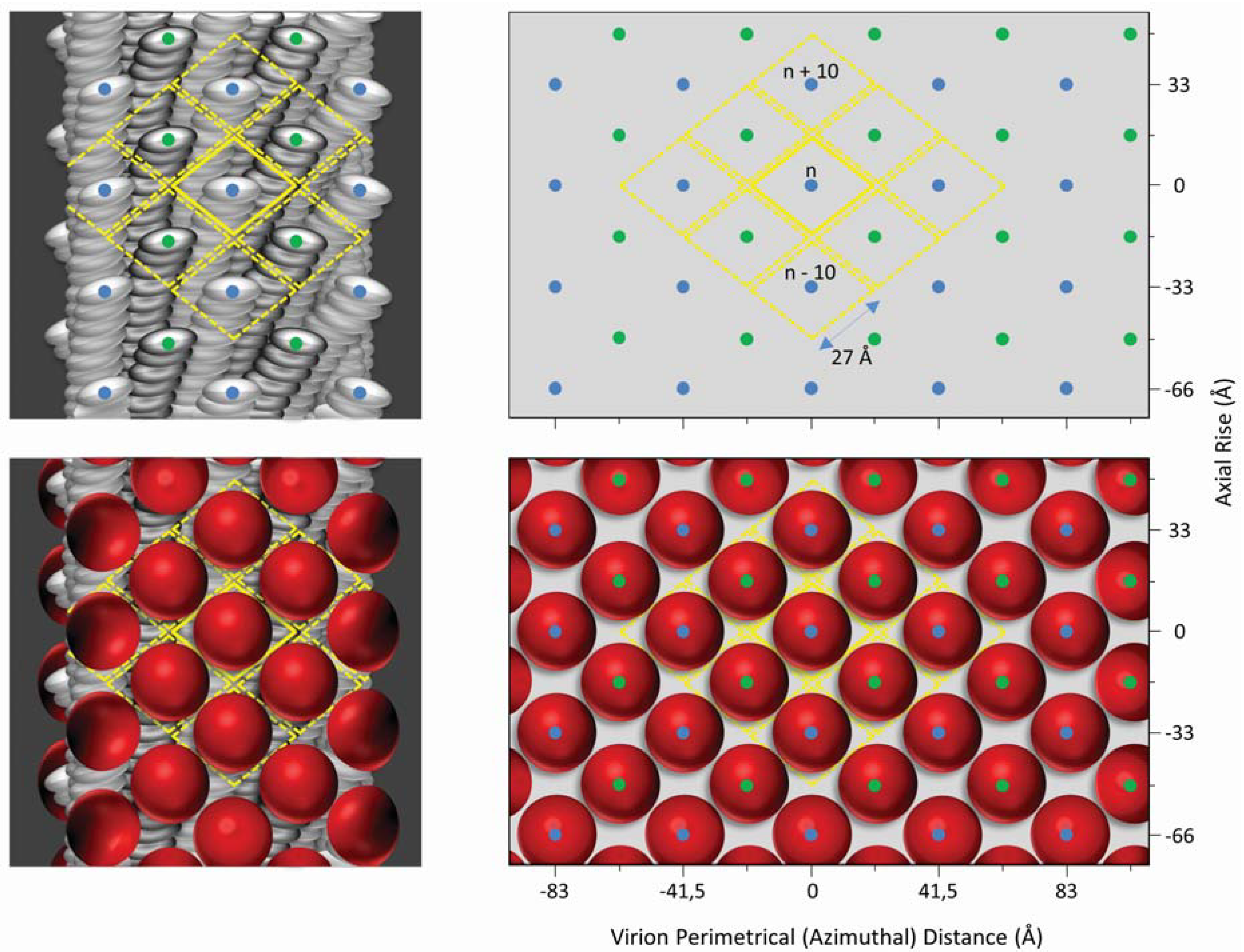 During the last two decades, inoviral vectors have been used in the development of vaccines against various infectious parasites and against non-infectious diseases like cancer and Alzheimer’s with promising results. While the applications of inovirus display technology in vaccine design against non-HIV-1 diseases have been mostly successful, the design of a HIV-1 vaccine development has so far been disappointing. A major obstacle has been the use of neutralizing monoclonal antibodies plagued with autoreactivity properties. Screening of RPLs with these antibodies resulted in the isolation of peptides that, as vaccine antigens, were unsuccessful in inducing a specific humoral response that would produce neutralizing antibodies. The recent isolation of antibodies such as VRC01 and 10E8 with more neutralizing breadth and potency without autoreactivity properties than the previously utilized antibodies may overcome this obstacle [115,124]. Particularly, the induction of VRC01-like and 10E8-like antibodies could be a feasible target, since these antibodies also seem to be produced from a significant percentage of the HIV-1-infected population [115,126,127]. While humoral responses have been well documented, cellular responses have not been assessed in most studies for the design of a HIV-1 vaccine using inoviruses. The only study in which a cellular anti-HIV-1 response was detected also reported a successful induction of a long-lasting memory CTL response seven months after a single vaccination in mice with inoviral particles [60], demonstrating that the induction of cellular immunity against HIV-1 using inoviruses is feasible. IAVs are advantageous in that they can induce both arms of adaptive immunity. This finding could therefore be of importance in future efforts for the design of a HIV-1 vaccine.
Moreover, IAVs have unique characteristics compared to other viral vectors: they are stable, they can display a peptide in multiple (from few to thousands) copies on their surface and such constructs are very immunogenic without the use of an adjuvant. In addition, IAVs allow the immune system to focus on a specific epitope of interest instead of the whole protein, which is of great importance, since an important aspect for successful HIV-1 vaccine design is to focus on the induction of neutralizing antibodies against the specific neutralizing epitopes while at the same time avoiding the induction of ineffective antibodies against the numerous non-neutralizing epitopes of the HIV-1 glycoproteins, which act as decoys for the immune system. Ideally, an effective HIV-1 vaccine should be able to stimulate both humoral and cellular immune responses. Recently, adenoviral vectors were tested in clinical trials as HIV-1 vaccine carriers in order to induce cellular immunity, but they were shown to impose serious health risks for humans. On the other hand, IAVs are able to induce cellular immunity and at the same time they have been demonstrated to be safe for administration in animals and humans. These characteristics of IAVs, conferred by their structural and biological properties, make them effective antigen display vectors that can induce strong and specific humoral and cellular immune responses against the displayed antigen. These properties of IAVs along with newly discovered broadly neutralizing anti-HIV-1 antibodies, pave the way for the development of an effective HIV-1 vaccine.

This work was supported by financial support from the University of Cyprus and Birch Biomedical LLC, USA (Grant 3416-25017) awarded to L.G. Kostrikis.