:
The sequence polymorphism and population structure of Tomato chlorotic dwarf viroid (TCDVd) (isolate Trust) and Potato tuber spindle viroid (PSTVd) (isolate FN) in tomato plants were investigated. Of the 9 and 35 TCDVd clones sequenced from 2 different TCDVd-infected plants, 2 and 4 sequence variants were identified, respectively, leading to a total of 4 sequence variants of 360 nucleotides in length. Variant I was identical to AF162131, the first TCDVd sequence to be reported, and the rest exhibited 1 to 3 nucleotide differences, all in the TR domain, from AF162131/variant I. Of the 33 and 29 PSTVd clones sequenced from 2 different PSTVd-infected plants, 8 and 9 sequence variants were found, respectively, leading to a total of 15 variants ranging in length from 356 to 359 nucleotides. The variant I was identical to EF044303, a PSTVd reported in Russia. The rest exhibited 1 to 11 nucleotide differences scattering in all five domains from EF044303/variant I. The results demonstrated for the first time that TCDVd, like many other viroids including PSTVd, exists in host plants as a collective group comprised of various sequence variants. However, in comparison to PSTVd, TCDVd is less polymorphic in tomato plants as fewer variants and lower haplotype/nucleotide diversities were observed.
Keywords:
TCDVd; PSTVd; sequence variants; polymorphism; population

Viroids are the smallest plant pathogens that can cause a wide range of symptoms from symptomless to severe stunting, leaf/stem necrosis and foliar/fruit deformation, depending on host plant and viroid species [1]. Viroids consist of a single-stranded, non-protein-coding, covalently closed RNA of 239-401 nucleotides (nt) [2]. Currently, 29 viroid species belonging to two families, Pospiviroidae and the Avsunviroidae, have been recognized [2]. Most viroids characterized so far are grouped in the Pospiviroidae family. They contain five structural domains/regions [3]: left terminal region (TL), pathogenic region (P), central conserved region (C), variable region (V) and right terminal region (TR).
Potato spindle tuber viroid (PSTVd), the type member of genus Pospiviroid, family Pospiviroidae, was the first viroid species to be identified [4]. It infects potato, tomato and many other solanaceous and non-solanaceous plant species and causes significant yield loss and quality degradation in potato and tomato crops [5,6,7,8]. Although eradicated from potato production systems in many countries [9], the pathogen has recently occurred in isolated circumstances in greenhouse tomato crops [8,10,11,12]. In addition to PSTVd, Tomato chlorotic dwarf viroid (TCDVd) [6], a closely related species to PSTVd, has also been widely reported in greenhouse tomato crops worldwide [6,8,13,14,15].
Due to the lack of protein-coding capacity, viroids rely on their hosts for replication. Members of the Pospiviroidae family replicate in the nucleus by host DNA-dependent RNA polymerase II [1]. The lack of proof-reading activity of the plant polymerase(s), the large population size, and the rapid rate of RNA replication have been suggested to result in genetic polymorphism, as demonstrated in various viroids including PSTVd [16,17,18], Citric exocortis viroid (CEVd) [19,20], Hop stunt viroid (HSVd) [21], Australian grapevine viroid (AGVd) [22], Pear blister canker viroid [23], Peach latent mosaic viroid (PLMVd) [24,25], Grapevine yellow speckle viroid-1 (GYSVd-1) [26], and Chrysanthemum stunt viroid (CSVd) [27]. In this study, the genetic variants of TCDVd and PSTVd in tomato plants were investigated and analyzed. The results revealed the polymorphic nature of TCDVd in host plants. However, the TCDVd isolate was less polymorphic than the PSTVd isolate.

Typical viroid-induced symptoms including stunting, bunching, leaf deformation, leaf and fruit size reduction, and leaf chlorosis were observed in tomato (cultivar Sheyenne) plants infected with TCDVd or PSTVd (Figure 1), similar to that reported previously [2,6,28,29,30]. In potato (cultivar Shepody), both viroids induced growth stunting, foliar epinasty and spindle-shaped tubers (data not shown). The TCDVd isolate (designated TCDVd Trust in this paper) was previously characterized and sequenced [6], and one sequence (accession number AF162131) was reported. The PSTVd isolate (designated PSTVd FN in this paper), on the other hand, has not been molecularly characterized to date.
Many viroids, including PSTVd, have been suggested to propagate in their hosts as a population of similar but not identical sequences [16]. To reveal whether this is also true for TCDVd, and more specifically, to reveal whether there is more than one sequence variant in TCDVd isolate Trust, multiple full length cDNA clones generated from the RNA of an infected tomato plant were sequenced together with clones derived from a PSTVd-infected tomato plant. As shown in Table 1 and Table 2, sequence variants were detected in both viroids. For TCDVd, an initial sequencing of 9 clones from plant 1 detected 2 sequence variants at occurrence frequencies of 66.7% and 33.3%, respectively. Further sequencing of 35 clones obtained from plant 2 detected 4 variants at occurrence frequencies of 65.7%, 28.6%, 2.9% and 2.9%, respectively (Table 1). For PSTVd, 8 sequence variants at occurrence frequencies ranging from 3.0% to 30.3% were found in clones obtained from PSTVd-infected plant 1; and 9 variants at occurrence frequencies of 3.4% to 44.8% in clones obtained from plant 2 (Table 2). These results demonstrate that TCDVd, like PSTVd as well as many other viroid species [19,21,22,23,24,25,26], exists as a collective group comprised of various sequence variants. Nevertheless, TCDVd was less diverse than PSTVd in tomato plants, as fewer TCDVd variants and lower haplotype diversity (0.500 and 0.499 for TCDVd vs. 0.799 and 0.697 for PSTVd) was observed in the clones from the plants (Table 1 and Table 2). 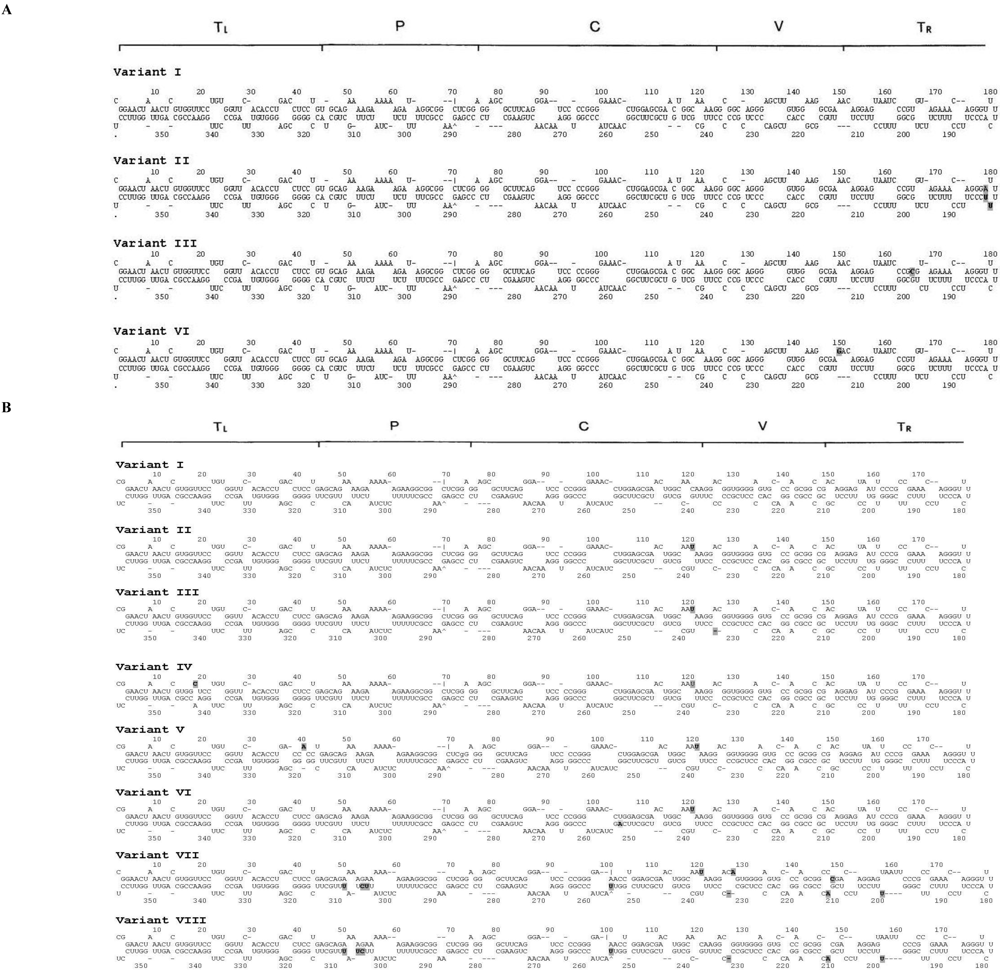 Despite the considerable differences between PSTVd and TCDVd in variant diversity, the two shared a similar trend in phylogeny. As shown in Figure 3 and Figure 4, two major branches were found for both viroids. For TCDVd, variants I, III and VI formed a cluster/branch, whereas variant II stood alone (Figure 3). For PSTVd in plant 1, variants I, II, III, IV, V and VI formed a branch whereas variants VII and VIII formed the other branch (Figure 4A). In plant 2, variants I, II, IX, X, XI and XII formed a branch, and VIII, XIV and XV formed the other branch (Figure 4B). A similar phylogenetic tree formed when PSTVd variants from both plants were combined (data not shown), confirming the existence of two population groups in both TCDVd and PSTVd. Nevertheless, the population composition of TCDVd was much simpler than that of PSTVd, further supporting the above analysis that the TCDVd isolate Trust was less polymorphic than the PSTVd isolate FN. Whether the relative simplicity of TCDVd in sequence diversity in isolate Trust was due to the higher stability of the predominant variant (i.e., variant I) or due to other factors such as less mutagenic pressure [27] the viroid endured during its existence in the host plants is unknown. To answer these questions, further research is underway to investigate the diversification of major TCDVd and PSTVd variants in tomato plants using single cDNA clones of these variants.

TCDVd isolate Trust was the same tomato isolate characterized and reported previously by Singh et al. [6]. The viroid was maintained in tomato cultivar Sheyenne plants in a greenhouse with 16 h light/day with a 16/8 h (light/day) cycle. The ambient light is supplemented with artificial light or shading to give a light intensity of 90 µm2/s. The temperature was 20–25 °C, and the humidity was 75%. PSTVd isolate FN was a potato isolate provided by A. Murphy (Potato Research Centre, Agriculture and Agri-Food Canada) and maintained in tomato cultivar Sheyenne plants. Both TCDVd Trust and PSTVd FN were tested for their pathogenicity in potato (cultivar Shepody) and tomato (cultivar Sheyenne) by infection via mechanical inoculation of healthy seedlings/plantlets with leaf exact from a TCDVd- or PSTVd-infected plant, and the resulting symptoms were observed and recorded. For the experiments on analysis of viroid sequence variants in tomato plants, tomato (Sheyenne) seedlings at the four-leaf stage were mechanically inoculated with leaf extract of a TCDVd- or PSTVd-infected tomato plant, and grown in the greenhouse under the above described conditions. Three leaves from an inoculated plant were collected 30 days after inoculation, and subjected to RNA extraction. 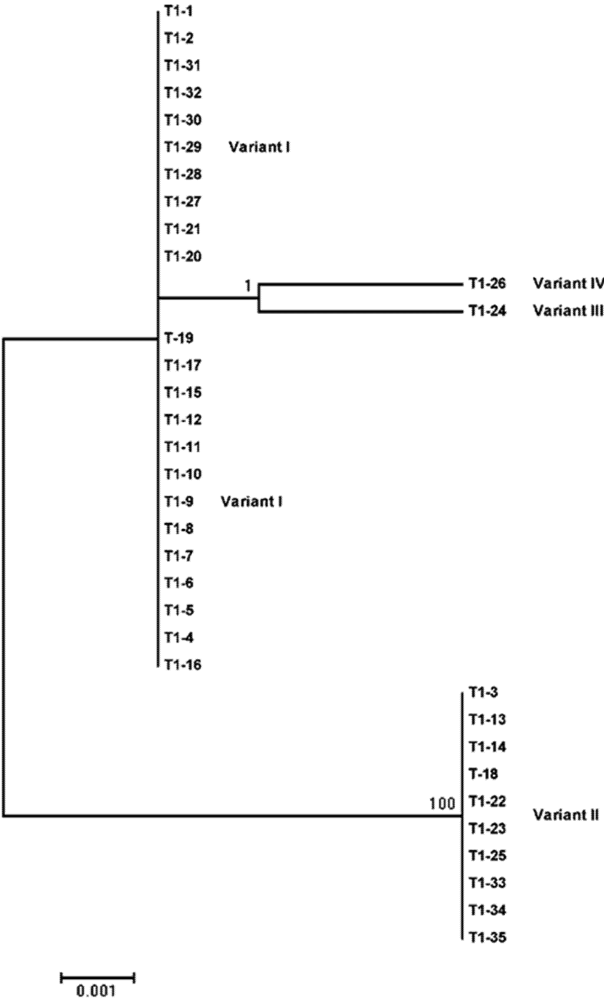 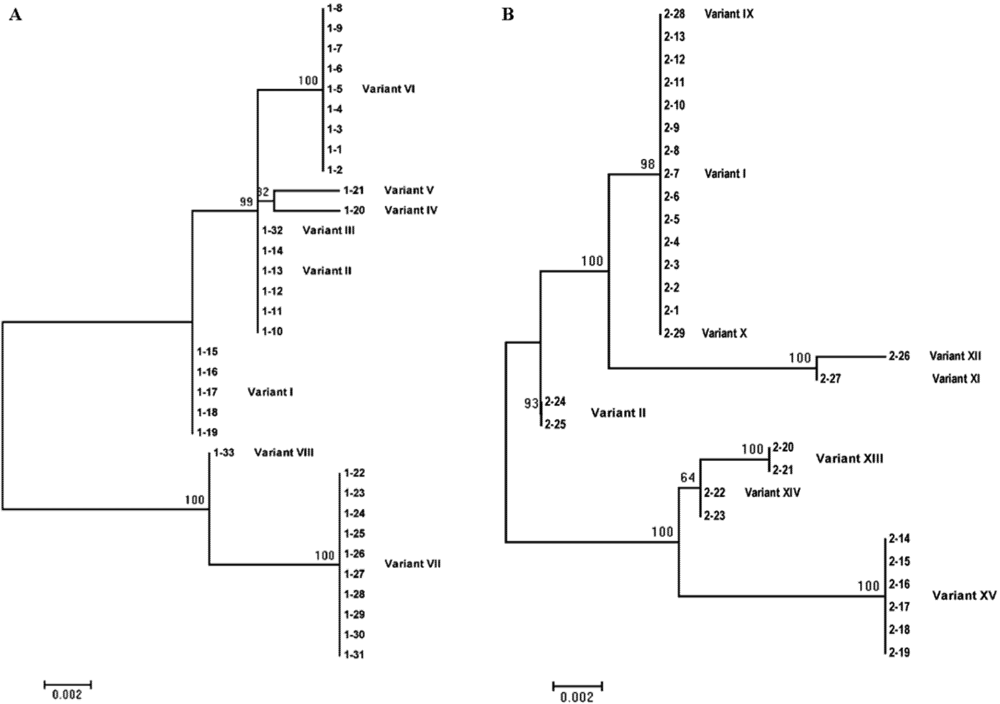 The PCR products of each targeted viroid were ligated into a pDrive Cloning Vector (Qiagen, Valencia, CA, USA) according to the manufacturer’s instructions. The ligated plasmids were transformed into E. coli DH5-α competent cells (New England BioLabs, Ipswich, MA, USA). A portion of the transformation mixture was spread onto LB agar plates containing ampicillin (75 µg/mL), X-gal and IPTG according to the manufacturer’s instructions, and incubated at 37 °C overnight. White colonies were screened further by colony-PCR with P3/P4 primer pair under the PCR conditions described above, and positive colonies were transferred into 2 mL LB medium (with 75 µg/mL ampicillin) and incubated at 37 °C overnight. Plasmid was extracted from the bacterial cells using Qiagen Plasmid Mini Kit (Qiagen). Nine to 35 viroid cDNA clones resulted from single PCR-ligation-screening processes were sent to Robarts Research Institute (London, Ontario, Canada) for forward and reverse sequencing using the T7 promoter and SP6 promoter primers, respectively.

For phylogenetic analysis, viroid sequences were first aligned using the ClustalW2 multiple sequence alignment program (version 2.21) [35,36]. The aligned sequences served as input for phylogeny analysis using MEGA5 [37]. The evolutionary history was inferred using the Maximum Likelihood method based on the Tamura-Nei model [38]. The statistical significance of branching was estimated by performing 100 replications of bootstrap re‑sampling from the original data using SEQBOOT.
Viroid nucleotide polymorphism (e.g., haplotype and nucleotide diversities) within a population was analyzed using DNA Sequence Polymorphism (DnaSP) version 5 [39,40]. Nucleotide diversity (or per-site heterozygosity, π) was calculated from the average number of pairwise sequence differences in the sample ([41], Equation 10.5: π = n/(n − 1)Σxixjπij) and its standard deviation is the square root of the variance ([41], Equation 10.7). Haplotype (gene) diversity and its sampling variance were estimated according to equations 8.4 and 8.12 with 2n replaced by n [41].
Prediction of secondary structures of viroids was carried out using the WEB-based Mfold program Version 3.1 [42,43]. The structures were generated on the principle of the minimum energy folding of an RNA sequence [44].

The author would like to thank Andrew Josselyn and Xiaowei Xue for their technical assistance.