Use of an Innovative Web-Based Laboratory Surveillance Platform to Analyze Mixed Infections Between Human Metapneumovirus (hMPV) and Other Respiratory Viruses Circulating in Alberta (AB), Canada (2009–2012)

We investigated the proportions of mono vs. mixed infections for human metapneumovirus (hMPV) as compared to adenovirus (ADV), four types of coronavirus (CRV), parainfluenza virus (PIV), RSV, and enterovirus/rhinovirus (ERV) in Alberta, Canada. Using the Data Integration for Alberta Laboratories (DIAL) platform, 26,226 respiratory specimens at ProvLab between 1 July 2009 and 30 June 2012 were selected and included in the study. Using the Respiratory Virus Panel these specimens tested positive for one or more respiratory virus and negative for influenza A and B. From our subset hMPV was the fourth most common virus (n=2,561) with 373 (15%) identified as mixed infection using DIAL. Mixed infection with hMPV was most commonly found in infants less than 6 months old and ERV was most commonly found in mixed infection with hMPV (230/373, 56%) across all age groups. The proportion of mixed-infection vs. mono-infection was highest for ADV (46%), followed by CRV 229E (32%), CRV HKU1 (31%), CRV NL63 (28%), CRV OC43 (23%), PIV (20%), RSV (17%), hMPV (15%) and ERV (13%). hMPV was significantly more likely to be identified in mono infection as compared with ADV, CRV, PIV, and RSV with the exception of ERV [p < 0.05]. View Full-Text
Keywords: hMPV; co-infection; testing; epidemiology; respiratory hMPV; co-infection; testing; epidemiology; respiratory
►▼ Show Figures 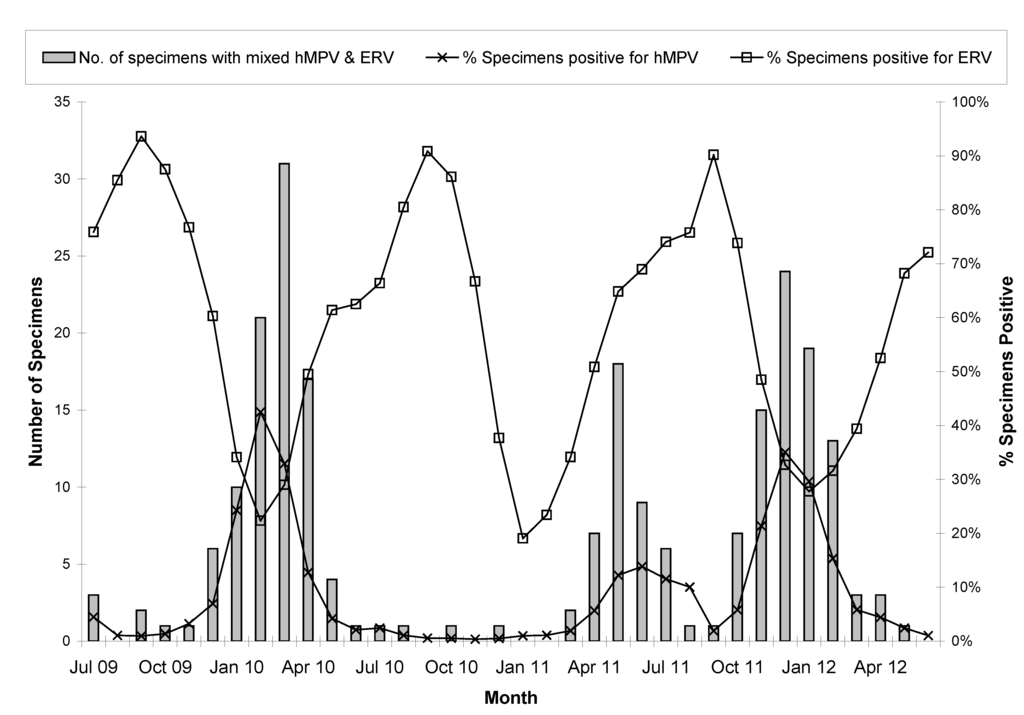