Risk Factors for Norovirus Infections and Their Association with Childhood Growth: Findings from a Multi-Country Birth Cohort Study
Next Article in Special Issue

Background: T and B cell-mediated immunity can be assessed using T cell receptor excision circle (TREC) and Kappa-deleting recombination excision circle (KREC) analysis, respectively, and successful implementation of this method requires evaluation of the correlation between the TREC frequencies and T cell subsets as well as KREC levels and B lymphocyte subsets. The aim of the present study was to evaluate the correlation between the TREC/KREC concentrations and T/B lymphocyte subsets at different stages of COVID-19. Methods: We examined 33 patients in the acute stage of COVID-19 (including 8 patients with poor outcomes) and 33 COVID-19 survivors. TREC/KREC concentrations were measured using quantitative real-time PCR. T/B lymphocyte subsets were determined using flow cytometry. Results: Blood TREC and KREC levels were found to be significantly lower in the acute stage of COVID-19 compared to control values. Moreover, a zero blood TREC level was a predictor of a poor disease outcome. Reductions in CD3+CD4+CD45RO−CD62L− and CD3+CD8+CD45RO−CD62L− T cell counts (as well as in the main fractions of B1 and B2 B cells) indicated a favorable outcome in COVID-19 patients in the acute stage of the disease. Decreased CD3+CD4+CD45RO−CD62L+ and CD3+CD8+CD45RO−CD62L+ T cell frequencies and increased CD3+CD8+CD45RO−CD62L− cell counts were found to indicate a poor outcome in patients with acute COVID-19. These patients were also found to have increased B1 cell counts while demonstrating no changes in B2 cell counts. The levels of effector T cell subsets an naïve B cells were normal in COVID-19 survivors. The most pronounced correlations between TREC/KREC levels and T/B cell subsets counts were observed in COVID-19 survivors: there were positive correlations with naïve T and B lymphocytes and negative correlations with central and effector memory T cell subsets. Conclusions: The assessment of correlations between TREC and T cell subsets as well as KREC levels and B cell subset counts in patients with acute COVID-19 and COVID-19 survivors has shown that blood concentrations of TREC and KREC are sensitive indicators of the stage of antigen-independent differentiation of adaptive immunity cells. The results of the TREC and KREC analysis correlated with the stages of COVID-19 and differed depending on the outcome of COVID-19.
Keywords: COVID-19 patients; T lymphocyte; B lymphocyte; TREC; KREC COVID-19 patients; T lymphocyte; B lymphocyte; TREC; KREC

The effectiveness of the immune response in patients with any infection is largely determined by the functional activity of T and B lymphocytes. In the process of respiratory transfer, SARS-CoV-2 infects the alveolar epithelial cells, endothelial cells of blood vessels and macrophages and causes the reduction or complete cessation of interferon synthesis [1,2,3]. Therefore, there is no interferon-dependent inhibition of viral replication, no migration of viral-specific T lymphocytes and no synthesis of neutralizing antibodies in the site of inflammation. In case of disorders of a local protective immune response and/or adaptive immunity, the cytokine synthesis increases substantially, resulting in the development of systemic inflammatory response syndrome (hypercytokinemia or the cytokine storm). The cytokine storm results in the involvement of organs and systems and the development of acute multiorgan failure [4,5,6,7].
Blood T and B cell counts were shown to decrease during the cytokine storm [8,9]. CD4+ and CD8+ T cell frequencies were inversely proportional to IL-6 and IL-10 concentrations, which increased with the severity of SARS-CoV-2 infection [10]. At the same time, an analysis of peripheral blood T helper cell differentiation showed that COVID-19 patients had lower proportions of CD4+ T cells with the CD45RA+CD27+CCR7+CD95− phenotype, while the counts of EM2 and EMRA (with CD45RA−CD27−CCR7+ and CD45RA+CD27−CCR7− phenotypes) cells were found to be significantly increased compared to control values [11]. Peripheral blood CD19+ B cell levels in patients with COVID-19 during the acute stage of the disease were lower compared to control values; however, there was an increase in the proportion of circulating CD27hiCD38hiCD24− plasma cell precursors [11].
Currently, there are many original research studies analyzing the profile of adaptive immunity cells in COVID-19 survivors. COVID-19 convalescents were found to have increased concentrations of IL-17 and counts of TNFα-producing CD4+ T helpers, while both the TNFα+ and IFNγ+ cell percentages were increased among cytotoxic T cells [12]. In general, the alterations in T and B lymphocyte maturation and differentiation in COVID-19 patients in the acute stage of the disease and COVID-19 survivors were assumed to be related to the functions of the central and peripheral organs of the immune system.
A method for the assessment of T and B cell-mediated immunity based on the determination of the content of T cell receptor excision circles (TREC) and Kappa-deleting recombination excision circles (KREC) is currently being implemented [13,14,15]. TREC are extrachromosomal circular excision products of the rearrangement of T cell receptor (TCR) genes during somatic DNA recombination, which are formed during the maturation of T cells in the thymus. Circular TREC molecules are formed in double-negative thymocytes (DN4 thymocytes) at the stage of rearrangement of the TCR α-chain upon recombination of the δRec and ψJα elements, followed by deletion of the TCRδ locus. TREC are detected in thymocytes and naïve T lymphocytes. KREC is formed by a similar mechanism at the stage of differentiation of pre-B cells and V(D)J-recombination of immunoglobulin light chain genes [16,17,18]. Thus, the amount of TREC and KREC in the blood characterizes the level of differentiation of T and B cells in the central organs of the immune system. The TREC/KREC assay has been successfully used in pediatric patients with primary immunodeficiencies [16,17,18]. A few studies have demonstrated the significance of the determination of TREC and KREC levels for the analysis of immunity in patients with various infectious diseases. A study by Khadzhieva M.B. et al. (2021) provided the results of the TREC/KREC assay in COVID-19 patients [14]. The results of this test could be used not only to assess the state of adaptive immunity but also to develop new methods of prognosis of the disease course and the outcomes of a wide range of infectious diseases, including COVID-19.
The aim of this study was to determine the correlation between the TREC and KREC concentrations and the T and B lymphocyte subset levels in COVID-19 patients at different stages of the disease.

2.2. Determination of TREC and KREC Concentrations

2.3. Evaluation of T and B cell Subsets by Flow Cytometry

The sample was described by calculating the median (Me) and the interquartile range in the form of Q1 and Q3 (C25–C75). The significance of differences between independent samples was assessed using the non-parametric Mann–Whitney U test. The Spearman rank R was used to study the correlation between the parameters. Statistical data analysis was carried out using Statistica 8.0 (StatSoft, Tulsa, OK, USA; 2007) applied software.

3.1. Determination of TREC and KREK Levels in COVID-19 Patients at Different Stages of the Disease

3.2. T cell Subsets in COVID-19 Patients at Different Stages of the Disease

3.3. B cell Subsets in COVID-19 Patients at Different Stages of the Disease

3.4. Correlation of TREC and KREC Values with T and B Cell Subsets at Different Stages of COVID-19

The results indicate that TREC and KREC level alterations characterized the stage and the severity of COVID-19. Patients with a favorable disease outcome showed decreased levels of TREC and KREC in circulation during acute COVID-19 compared to healthy subjects. The lowest levels of TREC and KREC were observed in patients with a poor disease outcome. The highest levels of TREC and KREC were found in COVID-19 survivors. Based on the correlations between TREC and KREC concentrations and T and B cell subsets during the acute stage of COVID-19 and after recovery, it could be concluded that blood TREC and KREC levels could be sensitive indicators of antigen-independent differentiation of adaptive immunity cells. In general, the acute phase of COVID-19 in patients with a favorable outcome was characterized by decreased T and B cell blood counts. In these patients, T and B cell subset alterations included a significant decrease in TEMRA levels of Th cells and cytotoxic T cells, while there was a decrease in the B1- and B2-cell counts. In patients with a poor outcome of the acute stage of COVID-19, a decrease in the T cell count was associated with a decreased T helper count (due to insufficiency of naïve CM and EM cells), as well as a decreased cytotoxic T cell count (mainly due to naïve cells). An increase in the B cell count observed in patients with a poor disease outcome is associated with the B1-cell subsets. Blood T cell counts in COVID-19 survivors were higher than in healthy subjects (due to T helpers), while the effector subsets recovered almost completely. The qualitative and quantitative composition of blood B cell subsets in COVID-19 survivors was largely similar to that observed in the acute stage of the disease, while the counts of naïve B1- and B2-cell counts were restored. Thus, the change in the subset composition of T and B lymphocytes in patients with COVID-19 determines the nature of the course and outcome of the disease. The subset composition of T and B cells is not restored to control values in recovered patients, but a tendency to its normalization was revealed. Based on the revealed correlations between the levels of TREC and KREC concentrations with the subset composition of T and B lymphocytes as well as the information content of their levels in assessing the nature of the course and prognosis of the outcome, it can be concluded that it is necessary to determine the concentrations of TREC and KREC in the treatment of patients with COVID-19.

Study concept and design: A.A.S., E.T. and D.K.; manuscript writing and editing—A.A.S., I.K. (Igor Kudryavtsev), D.K. and A.B.; review of publications on the topic of the article and discussion—D.K., I.K. (Igor Kudryavtsev) and I.K. (Ilya Korsunsky); material collection and processing—E.T., V.B. and A.B. All authors have read and agreed to the published version of the manuscript.

The study was conducted according to the guidelines of the Declaration of Helsinki and approved by the local Ethics Committee of the Federal Research Center “Krasnoyarsk Science Center” of the Siberian Branch of the Russian Academy of Sciences (protocol No. 11, 10 November 2020).

All patients included in the study provided informed consent. 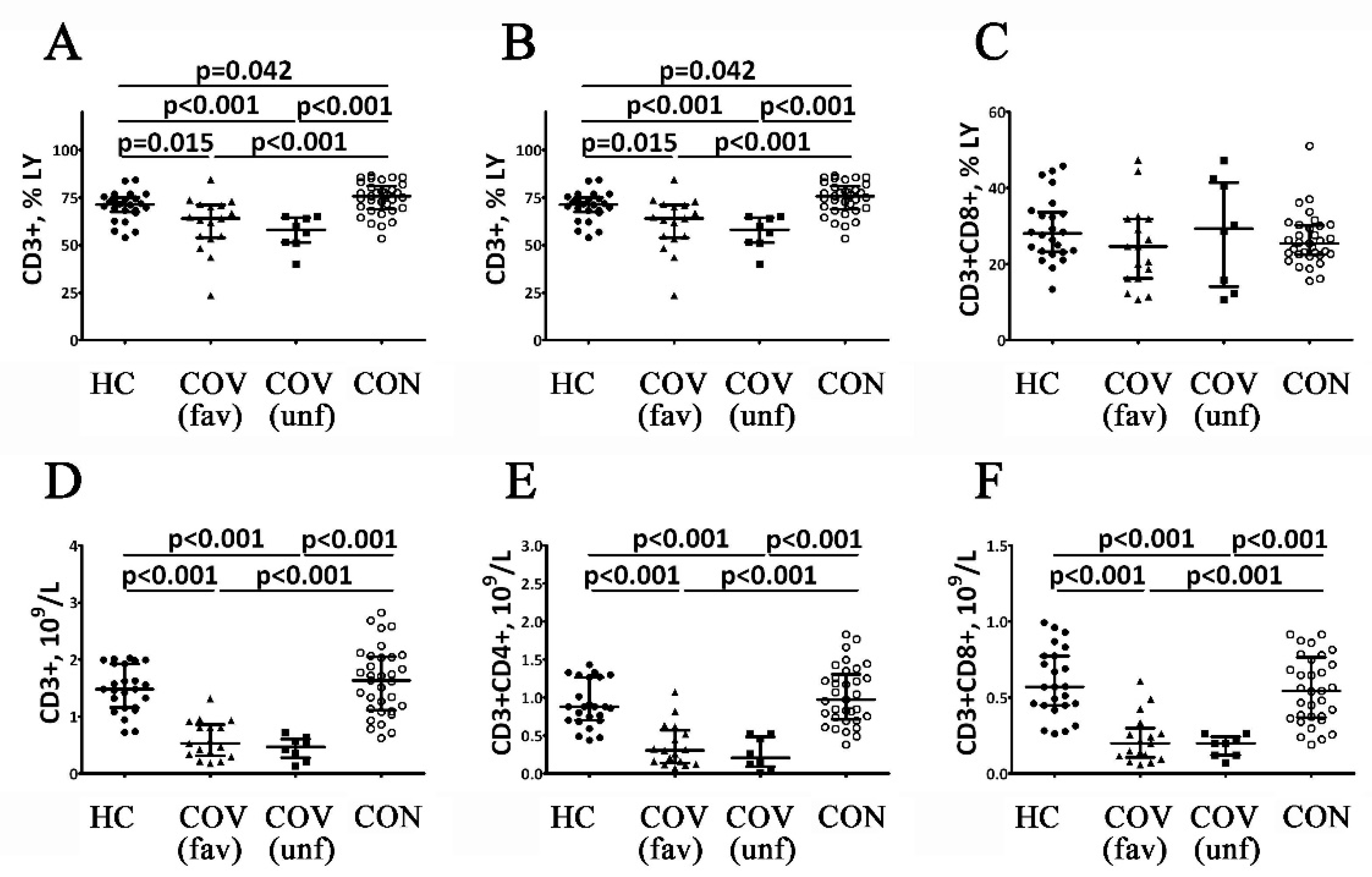 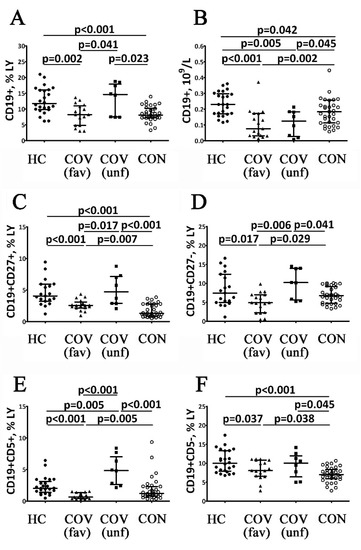