:
Seasonal H3N2 influenza virus has always been a potential threat to public health. The reassortment of the human and avian H3N2 influenza viruses has resulted in major influenza outbreaks, which have seriously damaged human life and health. To assess the possible threat of the H3N2 avian influenza virus to human health, we performed whole-genome sequencing and genetic evolution analyses on 10 H3N2 field strains isolated from different hosts and regions in 2019–2020 and selected representative strains for pathogenicity tests on mice. According to the results, the internal gene cassettes of nine strains had not only undergone reassortment with the H1, H2, H4, H6, and H7 subtypes, which circulate in poultry and mammals, but also with H10N8, which circulates in wild birds in the natural environment. Three reassorted strains were found to be pathogenic to mice, of these one strain harboring MP from H10N8 showed a stronger virulence in mice. This study indicates that reassorted H3N2 AIVs may cross the host barrier to infect mammals and humans, thereby, necessitating persistent surveillance of H3N2 AIVs.
Keywords:
H3N2; avian influenza virus; reassortment; characterization; evolutionary; pathogenicity; strong virulence; mice; potential threat

A total of 672 oropharyngeal and cloacal swabs were collected from chickens, ducks, geese and pigeons in live poultry markets and commercial poultry farms between 2019 and 2020. Each sample was placed in 1 mL of cold phosphate-buffered saline (PBS) containing penicillin (2000 U/mL) and streptomycin (2000 U/mL). After mixing and centrifugation at 10,000× g/min for 5 min, 0.2 mL of supernatant was used to inoculate 9-day-old specific-pathogen-free chicken embryos via the allantoic cavity followed by incubation at 37 °C for 48–72 h. We then harvested the allantoic fluid. A total of 10 virus strains were isolated: G152, G155, H159, and H157 are of chicken origin; H151, H34, H140, and H144 are of duck origin; G630 is of goose origin; and G188 is of environmental origin (Table S1).

RNA was extracted from the harvested virus suspensions using the RNeasy Mini Kit (Qiagen, Hilden, Germany), according to the method recommended by the manufacturer, and the whole gene sequence was amplified using two-step RT-PCR and the universal primers reported by Hoffman [20]. The ex Taq premixed enzyme used for the amplification was purchased from Takara reagent company. PCR products of all eight segments of these viruses were subjected to agarose gel electrophoresis, and the target fragments were recovered using the QiAamp Gel Extraction Kit (Qiagen, Hilden, Germany) and sequenced using an ABI3730 DNA analyzer (Shenggong Bioengineering Co., Ltd., Shanghai, China). Data were merged and assembled using Lasergene sequence analysis software based on the National Center for Biotechnology Information (NCBI) virus database (https://www.ncbi.nlm.nih.gov/, accessed on 9 March 2021).

MAFFT version 7.058 was used to align each of the eight gene segments and eliminate the sequences with less than 95% of the expected segment length. Duplicate sequences in the gene fragment were removed using PhyloSuite [21]. We performed the phylogenetic analysis three times using the maximum likelihood (ML) method in IQ-TREE under the GTR + F + G4 model with 5000 bootstrap replications. High-quality visualization of the phylogenetic data was performed using the Interactive Tree of Life (iTOL).

Based on the phylogenetic topologies obtained and their bootstrap values, we selected a few representative reference sequences and formed eight smaller data sets. TempEst (version 1.5.1) was used to analyze the R2 values of the temporal signals and best-fit model in the selected sequences. For estimating the nucleotide substitution rates of all eight segments, we used the Bayesian Markov chain Monte Carlo (MCMC) method offered in the Bayesian Evolutionary Analysis Sampling Trees (BEAST) (v1.10.4c) [22] and a relaxed molecular clock model with uncorrelated log-normally distributed rates and a coalescent Bayesian Skyline. We set the chain lengths to 500 million iterations and performed sampling every 5000 steps to obtain an effective sample size (ESS) ≥200 and convergence was assessed using Tracer (V1.7.1). Time-scaled summary maximum-clade-credibility (MCC) trees with 10 percent for the post-burn-in posterior were created using TreeAnnotator (V1.10.4), and visualized with FigTree (V1.4.4).

BioEdit and MEGA 6.0 were used for analysis of sequence format conversion and key amino acid changes, and the online free software NetNGlyc 1.0 Server (https://services.healthtech.dtu.dk/, accessed on 25 March 2021) was used to predict potential glycosylation sites. MegAlign was used to analyze the sequence homologies, and Simplot was used to analyze the recombination of the HA and NA genes.

There have been multiple reports of zoonotic infections caused by the reassortment of human influenza viruses and avian-origin H3N2-subtype viruses. To predict the possible threat of the H3N2 avian influenza virus to human health, we performed the mouse experiments primarily to investigate the pathogenicity of the now circulating H3N2-subtype reassortment strains in mammals. For this, we selected two strains from 2019 and two strains from 2020 corresponding to four H3N2-subtype avian influenza viruses from different sources (H159 isolated from chicken, H34 isolated from duck, G630 isolated from geese, G188 isolated from the environment) and assessed the pathogenicity of these strains from different hosts in mammals. These four strains are characterized by different degrees of reassortment, thus, selecting them for the animal experiments allowed us to better compare the pathogenicity of the strains with different degrees of reassortment in mice. The experimental animals were five-week-old BALB/c-mice purchased from Guangzhou Yancheng Biotechnology Co., Ltd. (Guangzhou, China). For the experiment, 50 mice were randomly divided into a total of 5 groups, with 10 mice in each group, including 1 control group. After administering isoflurane via inhalation as mild anesthesia, each mouse was inoculated with 50 µL of the 106 EID50 virus solution in the nasal cavity (with PBS solution administered to the control group). The body weight changes in each group were observed for 14 days. Four days after exposure, we euthanized three random mice from each group, and removed the brain, spleen, lungs, and kidneys from each. The organ virus titers were measured using nine-day-old chicken embryos, calculated using the Reed-Muench method [23] and expressed as the average log10 EID 50/g ± SD.

The serum antibody test results of all the challenge groups were positive. The titer of antiserum of G188, G630, H34 and H159 were 24, 25, 24, and 24, respectively. After challenge, some mice in the G630, H34 and H159 groups died (6 mice of G630 group, 3 mice of H34 group and 5 mice of H159 group had died), and their body weights temporarily decreased (Figure 5). The weights of the mice in the H34 and H159 groups began to recover on the fourth day after infection, and the weights of the mice in the G630 group began to recover on the sixth day after infection (the weights of the mice then decreased on the seventh day due to the feeding conditions). All the mice survived in the G188 group, and their body weights increased. According to the results of the organ-virus-content determination after four days of testing, the G630, H34 and H159 virus strains could replicate in mouse lungs. The load of the G630 strain was the highest in the lungs, and the three strains did not replicate in the other organs of the mice (Figure 5). The serum antibody for G188 was positive, but we did not detected the virus in the organs of the mice on the fourth day after testing.

In our study, we found that the H3N2 subtype had undergone complex reassortments with various influenza-A-virus subtypes and shared the closest relationship with the H1 subtype. Different reassortment isolates could infect mice without preadaptation, which suggests that the H3N2 avian influenza virus may cross the host barrier to infect humans. Concurrently, we found that the vaccine strains recommended by the WHO are far removed from the branch of the H3N2-subtype AIVs are likely to become infectious. If the H3N2 AIV and human influenza virus undergo reassortment again, then the existing vaccine may not provide effective immune protection. Therefore, the continuous surveillance of the prevalence of the H3N2 avian influenza viruses that circulate in poultry is essential.

This research was supported by China Agriculture Research System of MOF and MARA (CARS-41) and China National Animal Disease Surveillance and Epidemiological Survey Program (2021-2025) (No.202111).

The animal study protocol was approved by the Ethics Committee of Institutional Animal Care and Use Committee at SCAU (Approval 2022f058).

This study did not report any data.

We gratefully acknowledge the authors, originating and submitting laboratories of the sequences from GISAID’s EpiFlu™ Database on which this research is based. This may include administrative and technical support or donations in kind (e.g., materials used for experiments).

The authors declare that the research was conducted in the absence of potential conflicts of interest. 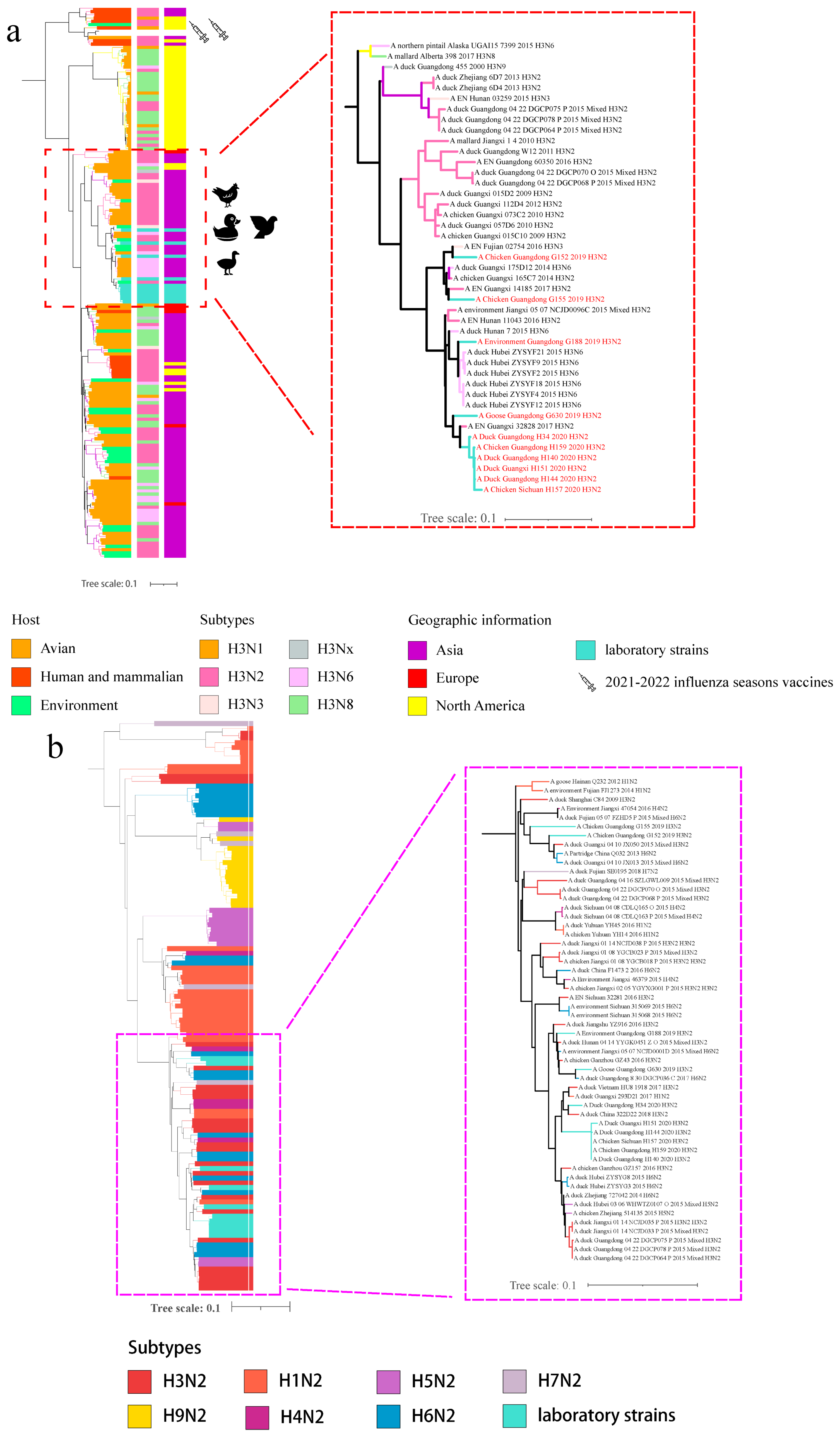 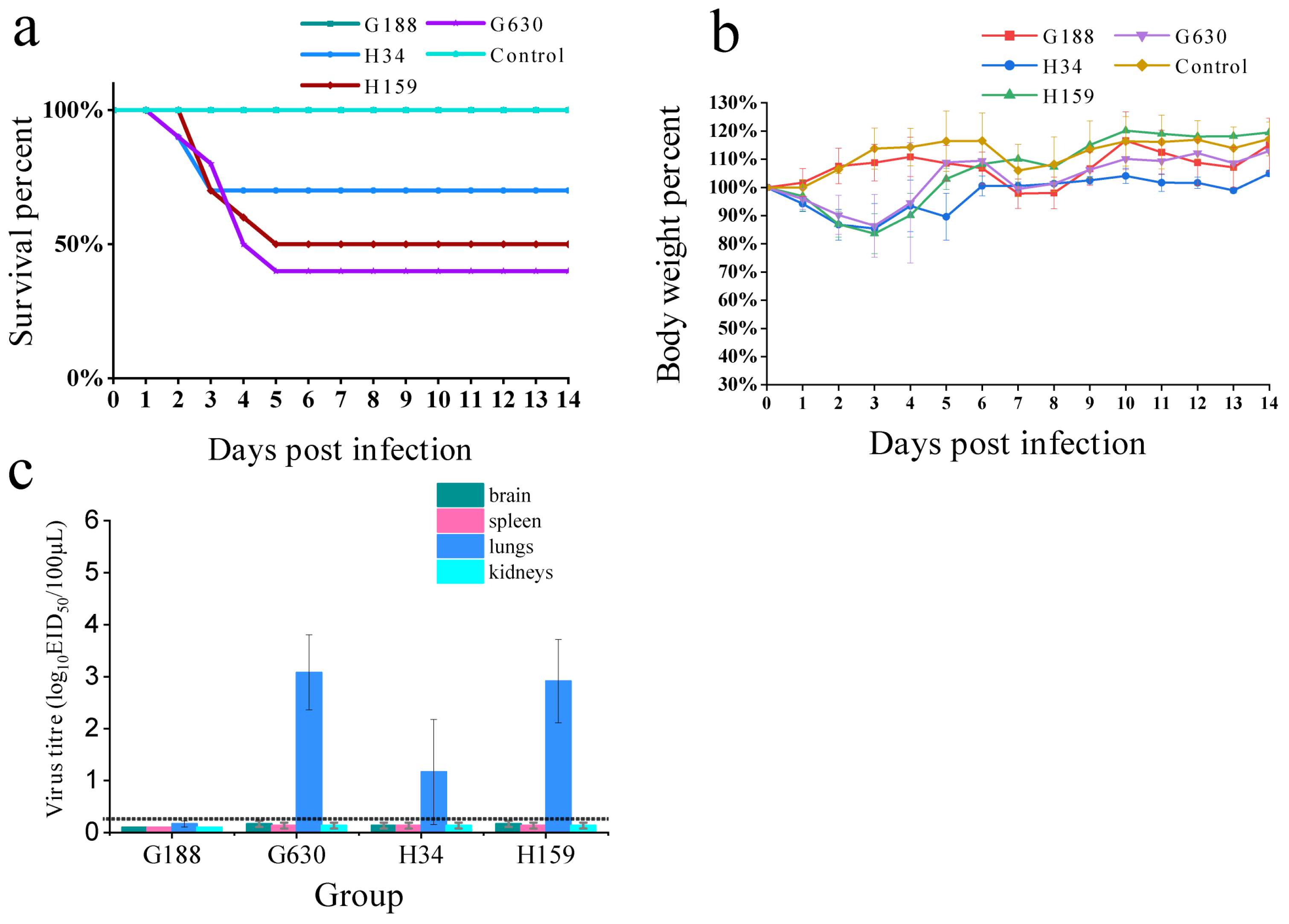