Influenza is an acute respiratory infection that causes significant illness and death in human populations [1]. Human influenza viruses infect mainly the cells of epithelia of conductive airways but can also infect endothelial cells of blood vessels which also express α(2,3)- and α (2,6)-linked sialic acids [2,3,4].
Infection of endothelial cells by influenza A viruses (IAV) may lead to endothelial activation or dysfunction with structural and functional dysregulation [5,6]. One of the most significant consequences of endothelial dysfunction is a reduction in synthesis and/or bioavailability of nitric oxide (NO) by endothelial nitric oxide synthase (eNOS). In addition, endothelial dysfunction can lead to the alteration of the expression of various endothelial proteins and cause vascular hyperpermeability, as well as disruption of intercellular junctions with loss of barrier function [7]. Moreover, endothelial dysfunction is one of the causes of cardiovascular pathology, which confirms the fact that both during and at the end of influenza epidemics, excess mortality is observed in patients in risk groups, in particular, with cardiovascular and pulmonary disorders [8,9].
In this study we investigated the expression of three endothelial proteins: (1) endothelial nitric oxide synthase (eNOS), (2) plasminogen activator inhibitor-1 (PAI-1), and (3) tissue plasminogen activator (tPA).
eNOS plays a significant role in maintaining a healthy cardiovascular system and in its adaptation in cardiovascular diseases [10]. Nitric oxide produced by eNOS is a potent vasodilator, but also has antiviral, anti-atherogenic, antiproliferative and anticoagulatory effects which maintain vascular homeostasis [11,12]. NO also plays a key role in inflammation: under physiological conditions, NO has an anti-inflammatory effect while its overproduction induces inflammation [13].
The important roles of regulation of hemostasis as well as influenza pathogenesis belong to PAI-1 and tPA. PAI-1 (serpin E1) is a serine protease synthesized by various cells including endothelial cells. Under normal physiological conditions, PAI-1 controls the activity of the urokinase plasminogen activator (uPA), tissue plasminogen activator (tPA), and the plasmin and matrix metalloproteinases [14,15]. PAI-1 overexpression is associated with pathological fibrin deposition and thrombotic events, while a decrease in PAI-1 expression may lead to hemorrhage [16]. It is important to note that PAI-1 is an active participant in the influenza virus infection cycle. Infectious activity of the influenza A virus can be diminished by PAI-1, which inhibits cleavage of influenza A virus hemagglutinin [17].
tPA is also a serine protease which converts plasminogen to plasmin needed for dissociation of the fibrin clot. It has been shown that tPA can function as a cytokine, regulating some cell signaling pathways, in particular, activating the NF-κB transcription factor responsible for the development of the inflammatory response [18]. tPA also determines virulence of the influenza virus, since plasmin (released from plasminogen by its cleavage by tPA) is one of the main enzymes that cleaves influenza virus hemagglutinin (HA0 to HA1 and HA2) which increases virus infectivity [19].
Thus, all three endothelial proteins have key roles not only in maintaining vascular homeostasis and hemostasis but they also take part in the IAV reproduction cycle.
The study of endothelial protein expression may reveal the features of endothelial dysfunction in influenza, which will help to improve the pathogenesis-based therapy of influenza virus infection.

Thirty male Wistar rats weighing 220–250 g were obtained (Preclinical Translational Research Centre, Saint-Petersburg, Russia) and divided into three groups, including two experimental groups and one control group (n = 10). The rats were housed in shoe-box cages with two per cage. Animals were maintained at 22 ± 2 °C and a relative humidity of 50 ± 10% with a 12 h light/dark cycle. All rats received water and food ad libitum. All procedures were approved by the Animal Care and Use Committee of the Smorodintsev Research Institute of Influenza and were carried out in accordance with the principles of humane treatment of animals, regulated by the requirements of the European Convention (Strasbourg, 1986).

Influenza A/St. Petersburg/48/16 H1N1(pdm09) virus was obtained from the Laboratory of Influenza Evolutionary Variability of the Smorodintsev Research Institute of Influenza (St. Petersburg, Russia). The isolate selection was based on clinical studies of IAV H1N1(pdm09), as a causative agent of hemorrhagic pneumonia [20]. The virus was preliminarily adapted through 9 successive passages through infected lung homogenates of Wistar rats, as described [21]. At the last passage, the infectious activity of the influenza virus was 6.6 lg EID50/mL; hemagglutination titer of the virus of 1:1024.

Rats from each experimental group after anesthesia with isoflurane (Abbott, Chicago, IL, USA) were intranasally inoculated with 0.2 mL of rat-adapted influenza A(H1N1)pdm09 virus. Control rats were anesthetized, instilled intranasally with 0.2 mL of alpha-MEM, and necropsied at 24 and 96 h. After necropsy, lungs were aseptically removed and fixed in 10% neutral buffered formalin for 24–48 h at room temperature with subsequent histological processing. The body weight of the rats was recorded before virus or alpha-MEM administration, as well as before necropsy.

Sections of paraffin-embedded tissue blocks with a thickness of 4–5 μm were placed on poly-L-lysine glass slides (Thermo Fisher Scientific, Waltham, MA, USA). To determine the level of expression of endothelial proteins, monoclonal mouse anti-eNOS antibody (Abcam, Bostin, MA, USA, ab76198), polyclonal rabbit anti-PAI-1 antibody (Abcam, USA, ab66705) and monoclonal mouse anti-tPA antibody (Novus Biologicals, Littleton, CO, USA, AH54-10) were used. Sections were incubated with antibody at a dilution of 1:200 (for PAI-1, tPA) and 1:500 (for eNOS) for 1 h at room temperature in a humid chamber. To detect the studied endothelial protein expression in the autopsy material, the visualization system Envision Flex was used, which included DAB chromogen (Dako, Glostrup, Denmark) applied for 2–3 min. Then, sections were washed three times, counterstained with Mayer’s hematoxylin, dehydrated in isopropyl alcohol, and coverslipped.
Morphometric analysis was carried out in Nis-Elements BR 4.40 (Nikon, Tokyo, Japan) with constant settings using blue channel binarization in automatic mode with constant threshold. For each endothelial protein, the registration threshold was empirically selected: for eNOS—0–105, for PAI-1—0–115, for tPA—0–100. Expression quantification was evaluated by sum intensity parameter—sum intensity in every pixel of the object (region of interest).

2.5. Determination of PAI-1 and tPA Concentration in Rat Plasma

Rat plasma was frozen and stored at −20 °C. The concentration of PAI-1 and tPA was analyzed using a commercial kit and standard controls (Abcam, USA). The results of the reaction were taken into account in an enzyme immunoassay analyzer (Anthos, Austria) at a wavelength of 450 nm. The concentration of PAI-1 and tPA in the blood plasma of rats was determined based on the standard curve.

Body weights of the rats were within the normal range, and no statistically significant differences between the groups were observed. No signs of clinical illness were observed in the infected rats over time.

3.3. tPA Expression in Pulmonary Vascular Endothelium and in Blood Plasma of Rats

The expression of tPA in the pulmonary vascular endothelium of rats infected with adapted A(H1N1)pdm09 virus was increased at 96 hpi (Figure 2C).
Sum intensity of tPA in the pulmonary vascular endothelium was increased by 2.2-fold at 96 hpi compared with the control (p < 0.05) (Figure 2D). Since tPA expression over time was at a relatively low level, we additionally analyzed the concentration of tPA in the blood plasma of rats infected with the influenza virus.
The tPA concentration in the rat blood plasma of the infected rats did not change over time (Figure 2E). The tPA concentration was 2393.4 ± 236.41 pg/mL at 24 hpi and 1483.2 ± 418.54 pg/mL at 96 hpi (control 1829.5 ± 699.8).

3.4. PAI-1 Expression in Pulmonary Vascular Endothelium and in Blood Plasma of Rats

This research was carried out within the framework of the state assignment of the Ministry of Health of Russia. State registration number: 121051900147-5.

The animal study protocol was approved by Ethics Committee of Smorodintsev Research Institute of Influenza (protocol code No. 031 assigned by 25 February 2021). 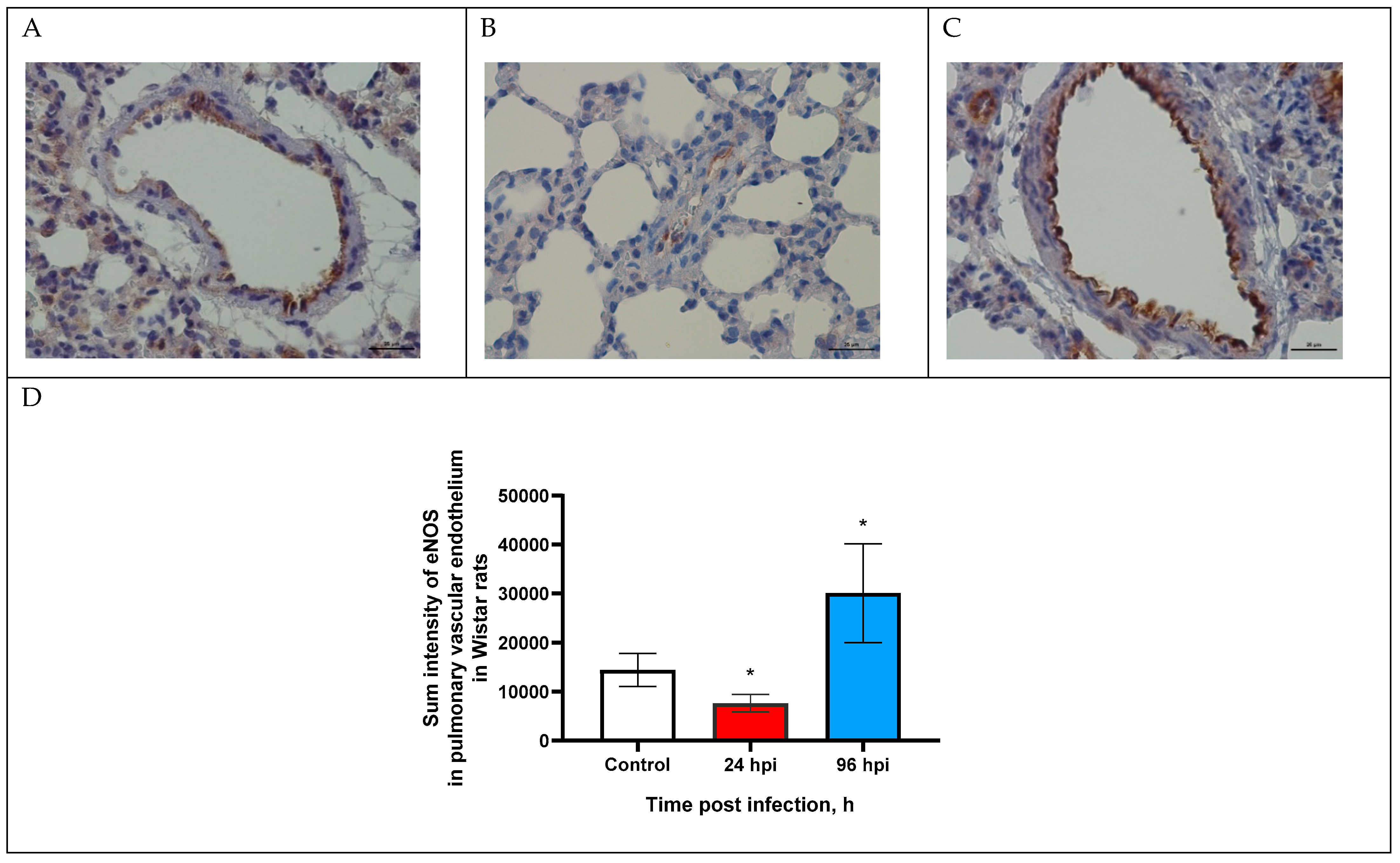 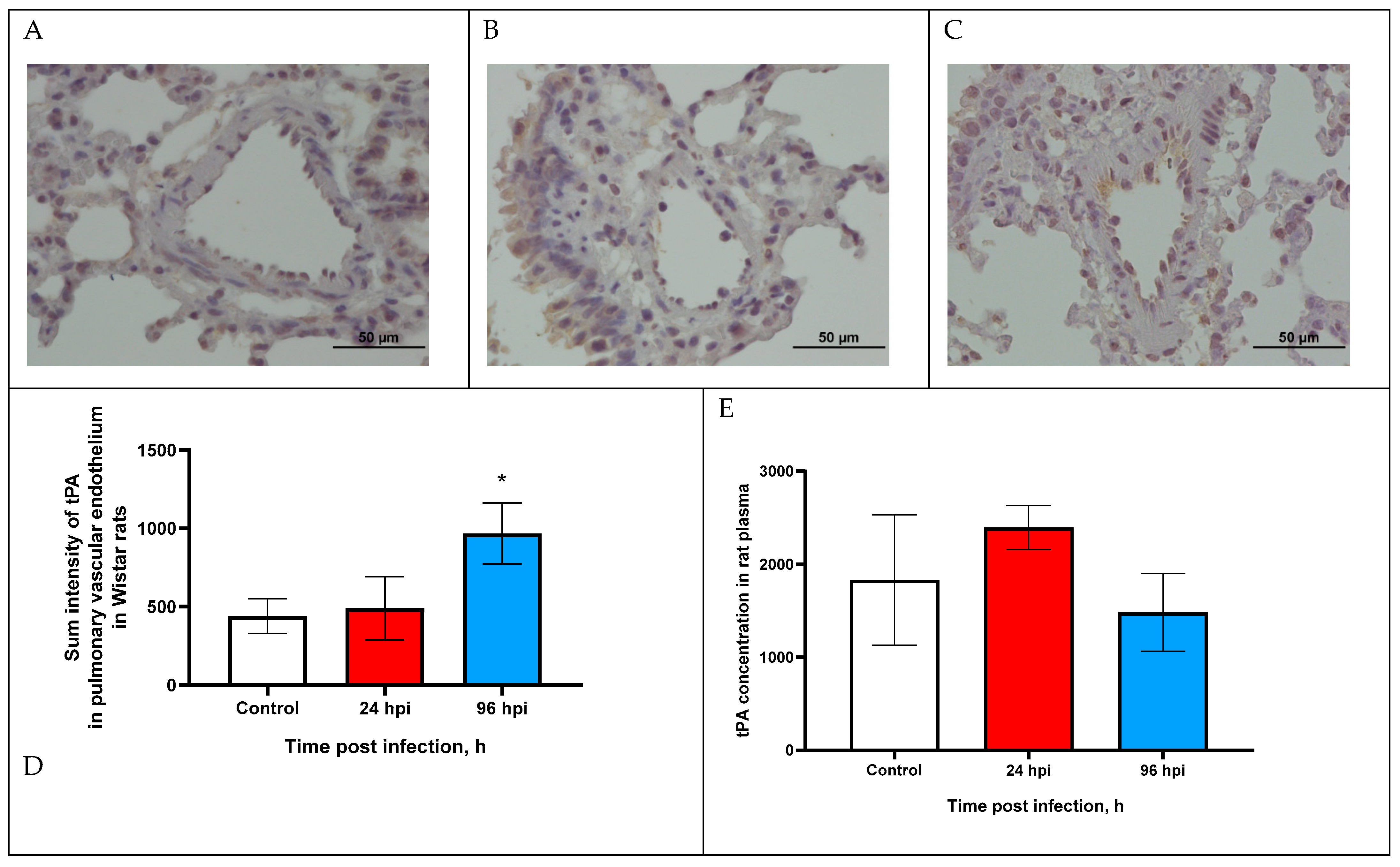 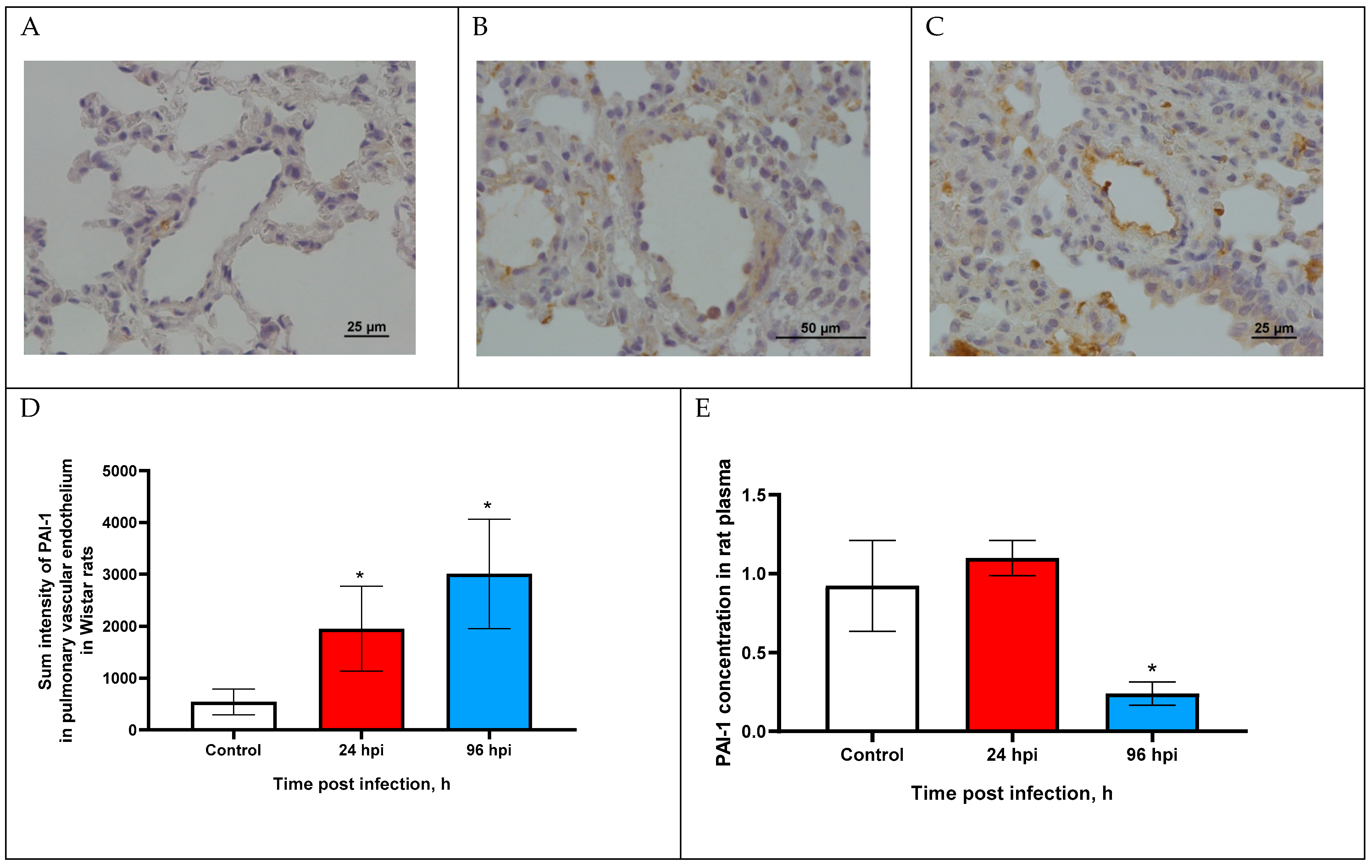