Bluetongue (BT) is a severe and economically important disease of ruminants that is widely distributed around the world, caused by the bluetongue virus (BTV). More than 28 different BTV serotypes have been identified in serum neutralisation tests (SNT), which, along with geographic variants (topotypes) within each serotype, reflect differences in BTV outer-capsid protein VP2. VP2 is the primary target for neutralising antibodies, although the basis for cross-reactions and serological variations between and within BTV serotypes is poorly understood. Recombinant BTV VP2 proteins (rVP2) were expressed in Nicotiana benthamiana, based on sequence data for isolates of thirteen BTV serotypes (primarily from Europe), including three ‘novel’ serotypes (BTV-25, -26 and -27) and alternative topotypes of four serotypes. Cross-reactions within and between these viruses were explored using rabbit anti-rVP2 sera and post BTV-infection sheep reference-antisera, in I-ELISA (with rVP2 target antigens) and SNT (with reference strains of BTV-1 to -24, -26 and -27). Strong reactions were generally detected with homologous rVP2 proteins or virus strains/serotypes. The sheep antisera were largely serotype-specific in SNT, but more cross-reactive by ELISA. Rabbit antisera were more cross-reactive in SNT, and showed widespread, high titre cross-reactions against homologous and heterologous rVP2 proteins in ELISA. Results were analysed and visualised by antigenic cartography, showing closer relationships in some, but not all cases, between VP2 topotypes within the same serotype, and between serotypes belonging to the same ‘VP2 nucleotype’. View Full-Text
Keywords: Bluetongue virus; BTV; orbivirus; orbivirus serotypes; cross-serotype antibodies; VP2; plant expressed proteins; antigenic cartography Bluetongue virus; BTV; orbivirus; orbivirus serotypes; cross-serotype antibodies; VP2; plant expressed proteins; antigenic cartography
►▼ Show Figures 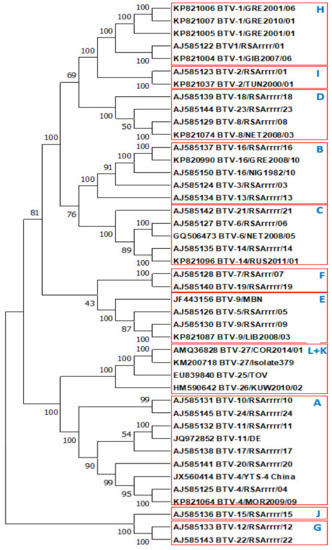