Bacteriophages vB_YpeM_fEV-1 (fEV-1) and vB_YpeM_fD1 (fD1) were isolated from incoming sewage water samples in Turku, Finland, using Yersinia pestis strains EV76 and KIM D27 as enrichment hosts, respectively. Genomic analysis and transmission electron microscopy established that fEV-1 is a novel type of dwarf myovirus, while fD1 is a T4-like myovirus. The genome sizes are 38 and 167 kb, respectively. To date, the morphology and genome sequences of some dwarf myoviruses have been described; however, a proteome characterization such as the one presented here, has currently been lacking for this group of viruses. Notably, fEV-1 is the first dwarf myovirus described for Y. pestis. The host range of fEV-1 was restricted strictly to Y. pestis strains, while that of fD1 also included other members of Enterobacterales such as Escherichia coli and Yersinia pseudotuberculosis. In this study, we present the life cycles, genomes, and proteomes of two Yersinia myoviruses, fEV-1 and fD1. View Full-Text
Keywords: bacteriophage; Yersinia pestis; dwarf myovirus; myovirus; genome; proteome bacteriophage; Yersinia pestis; dwarf myovirus; myovirus; genome; proteome
►▼ Show Figures 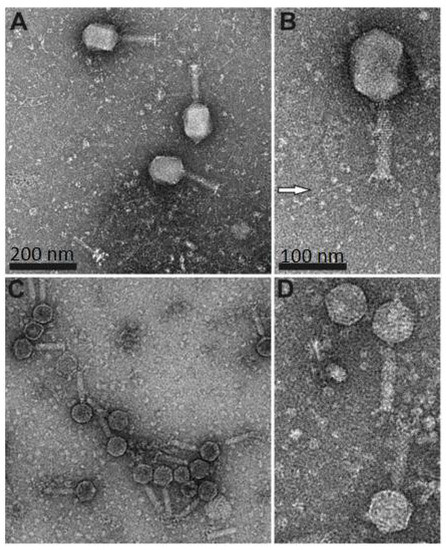