Gallid alpha-herpesvirus 1, also known as avian infectious laryngotracheitis virus (ILTV), continues to cause huge economic losses to the poultry industry worldwide. Similar to that of other herpesvirus-encoded proteins, the expression of viral genes encoded by ILTV is regulated by a cascade, and the underlying regulatory mechanism remains largely unclear. The viral immediate-early (IE) gene ICP4 plays a prominent role in the initiation of the transcription of early and late genes during ILTV replication. In this study, we identified AP-1 as the key regulator of the transcription of ILTV genes by bioinformatics analysis of genome-wide transcriptome data. Subsequent functional studies of the key members of the AP-1 family revealed that Fos, but not Jun, regulates ILTV infection through AP-1 since knockdown of Fos, but not Jun, by gene silencing significantly reduced ICP4 transcription and subsequent viral genome replication and virion production. Using several approaches, we identified ICP4 as a bona fide target gene of Fos that regulated Fos and has Fos response elements within its promoter. Neither the physical binding of Jun to the promoter of ICP4 nor the transcriptional activity of Jun was observed. In addition, knockdown of Fos reduced the transcription of MDH1 and ATP5A1, genes encoding two host rate-limiting enzymes essential for the production of the TCA intermediates OAA and ATP. The biological significance of the transcriptional regulation of MDH1 and ATP5A1 by Fos in ILTV infection was supported by the fact that anaplerosis of OAA and ATP rescued both ICP4 transcription and virion production in infected cells under when Fos was silenced. Our study identified the transcription factor Fos as a key regulator of ILTV infection through its transcription factor function on both the virus and host sides, improving the current understanding of both avian herpesvirus–host interactions and the roles of AP-1 in viral infection. View Full-Text
Keywords: Gallid alpha-herpesvirus 1; Fos; Jun; metabolic genes; ICP4 Gallid alpha-herpesvirus 1; Fos; Jun; metabolic genes; ICP4
►▼ Show Figures 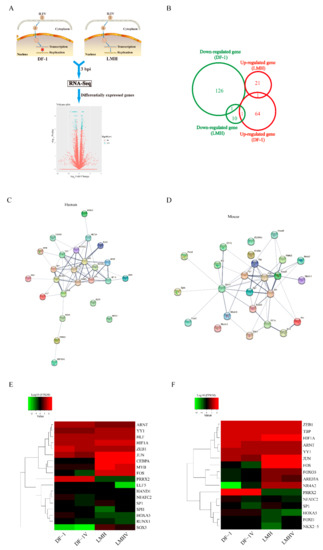