COVID-19 in 2021
Previous Article in Journal

West Java Health Laboratory (WJHL) is one of the many institutions in Indonesia that have sequenced SARS-CoV-2 genome. Although having submitted a large number of sequences since September 2020, however, these submitted data lack advanced analyses. Therefore, in this study, we analyze the variant distribution, hotspot mutation, and its impact on protein structure and function of SARS-CoV-2 from the collected samples from WJHL. As many as one hundred sixty-three SARS-CoV-2 genome sequences submitted by West Java Health Laboratory (WJHL), with collection dates between September 2020 and June 2021, were retrieved from GISAID. Subsequently, the frequency and distribution of non-synonymous mutations across different cities and regencies from these samples were analyzed. The effect of the most prevalent mutations from dominant variants on the stability of their corresponding proteins was examined. The samples mostly consisted of people of working-age, and were distributed between female and male equally. All of the sample sequences showed varying levels of diversity, especially samples from West Bandung which carried the highest diversity. Dominant variants are the VOC B.1.617.2 (Delta) variant, B.1.466.2 variant, and B.1.470 variant. The genomic regions with the highest number of mutations are the spike, NSP3, nucleocapsid, NSP12, and ORF3a protein. Mutation analysis showed that mutations in structural protein might increase the stability of the protein. Oppositely, mutations in non-structural protein might lead to a decrease in protein stability. However, further research to study the impact of mutations on the function of SARS-CoV-2 proteins are required. View Full-Text
Keywords: Indonesia; mutation; protein stability; SARS-CoV-2; variant; West Java Indonesia; mutation; protein stability; SARS-CoV-2; variant; West Java
►▼ Show Figures 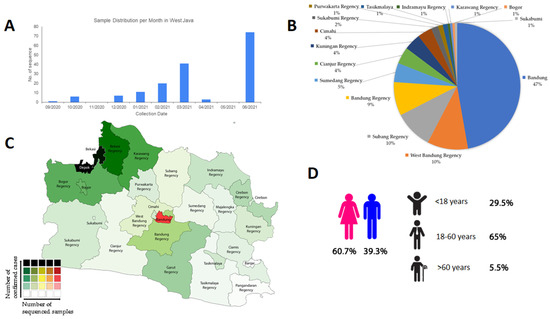