Bacteriophages are a promising therapeutic strategy among cystic fibrosis and lung-transplanted patients, considering the high frequency of colonization/infection caused by pandrug-resistant bacteria. However, little clinical data are available regarding the use of phages for infections with Achromobacter xylosoxidans. A 12-year-old lung-transplanted cystic fibrosis patient received two rounds of phage therapy because of persistent lung infection with pandrug-resistant A. xylosoxidans. Clinical tolerance was perfect, but initial bronchoalveolar lavage (BAL) still grew A. xylosoxidans. The patient’s respiratory condition slowly improved and oxygen therapy was stopped. Low-grade airway colonization by A. xylosoxidans persisted for months before samples turned negative. No re-colonisation occurred more than two years after phage therapy was performed and imipenem treatment was stopped. Whole genome sequencing indicated that the eight A. xylosoxidans isolates, collected during phage therapy, belonged to four delineated strains, whereby one had a stop mutation in a gene for a phage receptor. The dynamics of lung colonisation were documented by means of strain-specific qPCRs on different BALs. We report the first case of phage therapy for A. xylosoxidans lung infection in a lung-transplanted patient. The dynamics of airway colonization was more complex than deduced from bacterial culture, involving phage susceptible as well as phage resistant strains.
Keywords: cystic fibrosis; lung transplantation; antibiotic resistance; Achromobacter xylosoxidans; bacteriophage therapy cystic fibrosis; lung transplantation; antibiotic resistance; Achromobacter xylosoxidans; bacteriophage therapy

We report the case of a 12-year-old boy (35.5 kg), who received double lung transplantation in 25 March 2017, (at the age of 12) because of cystic fibrosis. Before transplantation, he was colonized with Aspergillus fumigatus, Achromobacter xylosoxidans (first colonization identified in 2013), and Pseudomonas aeruginosa. After transplantation, he experienced acute kidney injury requiring temporary haemodialysis, pulmonary embolism, and persisting airway colonization with A. fumigatus. He was discharged on 29 April 2017, with satisfactory respiratory status; he initially required no home oxygen therapy. His immunosuppressive regimen included prednisolone (25 mg/day), tacrolimus (1.5 mg bis in die (b.i.d.) with a target trough concentration of 6–8 ng/mL), mycophenolate mofetil (1 g b.i.d.) and his antimicrobial prophylaxis was cotrimoxazole (400/80 mg, three times a week), posaconazole (150 mg, oral suspension, ter in die (t.i.d.)), valacyclovir (500 mg b.i.d.), and intravenous immunoglobulins (15 g each three weeks).
Between May and June 2017, he experienced progressive shortness of breath, cough and increased sputum production; he subsequently required the addition of 1–1.5 L/min oxygen therapy. Because of a stenosis of the surgical anastomosis of the main left bronchus, a dilatation during rigid bronchoscopy was performed on 19 May and a Montgomery stent was inserted on 2 June. Later on, a stenosis of the surgical anastomosis on the right bronchus intermedius required a dilatation during rigid bronchoscopy followed by the insertion of an Oki stent on 29 June.
Several bronchoalveolar lavages (BAL), performed between May and June 2017, revealed inflammation (between 800 and >1000 leukocytes/mm3 with 88–90% of polymorphonuclear cells) and repeatedly grew pandrug-resistant A. xylosoxidans (Table 1 and Supplementary Figure S1) [1]. Lung biopsy performed on 19 June was consistent with lung infection: diffuse acute bronchiolitis with extension to peri-bronchiolar alveoli. Microbiological samples obtained from lung biopsies were negative (bacterial, mycological, and mycobacteriological cultures). The first antibiotic treatment consisted of intravenous tigecycline 50 mg b.i.d. from 29 June to 31 July. As BAL remained positive for A. xylosoxidans and the patient still required oxygen therapy; antibiotic treatment was subsequently switched to imipenem (1200 mg, t.i.d., ~100 mg/Kg/d) on 31 July 2017. Subsequent respiratory samples still grew A. xylosoxidans and the respiratory status did not improve (requiring oxygen at home, 1 L/min). Furthermore, despite antibiotic treatment and correct drainage of the right superior lobe, lung consolidation and micronodules remained.
Considering the failure of antibiotic treatment, phage therapy was proposed to the patient and his family, after multidisciplinary discussion. A first cocktail (APC 1.1) containing three lytic phages (JWDelta, JWT and 2-1) active against A. xylosoxidans isolate is1S (designated such as later), selected from the DSMZ collection (Braunschweig, Germany) [2,3], was prepared at the Laboratory for Bacteriology Research (Ghent University, Belgium) and the Laboratory for Molecular and Cellular Technology (Queen Astrid Military Hospital, Brussels, Belgium) using the above-mentioned bacterial isolate, as previously described [4]. The production was completed on 23 August with a final phage titer of 4 × 1010 plaque forming units (pfu)/mL defined by double-agar overlay method [4], an endotoxin level of 4000 EU/mL (ToxinSensor Chromogenic LAL Endotoxin Assay Kit, GenScript, Piscataway Township, NJ, USA) and a pH of 7.3 (in sterile PBS). Regulatory permission for phage importation was obtained on 1 September 2017, from the Agence Nationale de Sécurité du Médicament (ANSM). A first round of phage administration was performed, consisting of 3 nebulizations/day of 5 mL of the filter-sterilized (Sartorius 0.2 µm) phage solution, tenfold diluted in sterile saline on 8 and 9 September, using a vibrating mesh nebulizer (eFLOW rapid, PARI, PARI GmbH, Germany) with a mouth piece. Immediate tolerance was perfect, but no clinical improvement was noted and culture of subsequent respiratory samples remained positive for A. xylosoxidans (104 CFU/mL in the BAL of 15 September).
A second cocktail (APC 2.1) was produced, in which phage JWalpha was added to the three lytic phages of cocktail APC 1.1, to improve the therapeutic efficacy. The production was completed on 22 December with a final phage titer of 5 × 109 pfu/mL, an endotoxin level of 1760 EU/mL and a pH of 6.95 (in sterile PBS). Regulatory permission was obtained for phage importation on 16 January 2018 (ANSM). On 23 January, during therapeutic bronchoscopy under general anesthesia, 30 mL of APC2.1, tenfold diluted (in sterile saline) and filter-sterilized, was instilled in each pulmonary lobe through the fibroscope. Immediate tolerance was perfect and the patient was discharged on 24 January with continued phage nebulization at home: three times a day 5 mL of preparation A using a vibrating mesh nebulizer (eFLOW rapid, PARI) with a mouth piece for 14 days until 6 February. Clinical tolerance was perfect again, but the initial clinical status remained unchanged. BAL performed on 8 February 2018, two days after stopping the phage treatment, still grew 105 cfu/mL of A. xylosoxidans. Subsequently, the patient’s respiratory condition slowly improved and oxygen therapy was stopped on 15 February 2018. No clinical worsening was observed after imipenem interruption on 16 February 2018. Sputum culture remained positive for A. xylosoxidans but with a low bacterial density (103 CFU/mL in March and May 2018, and June 2019) and no A. xylosoxidans could be isolated from BALs#10 and #11, sampled on August 2019, and April 2020, respectively (Table 1). The last pulmonary function tests, performed on 17 October 2019, showed best results since lung transplantation, with an FEV1 of 79% and a forced vital capacity of 85%.

As we observed discrepant outcome in our patient (clinical improvement on the one hand but persisting low-grade airway colonization on the other hand), we decided to study the eight available A. xylosoxidans isolates (is1 to is9) from the patient’s colonization obtained by random picking from the culture plates from 4 distinct BALs (Table 2). These eight isolates, taken before, during and after the phage therapy period (Table 2), could not be differentiated from each other by means of MALDI-TOF [5] or McRAPD typing [6] and all belonged to the epidemic clone, already described previously among Belgian CF patients [5]. Whole genome sequencing (WGS) and de novo genome assembly for these eight isolates was carried out (Supplementary Methods and Table S1). The sequencing reads and genome sequences of all isolates have been submitted to the European Nucleotide Archive (ENA) and are available under project number PRJEB39103 (Table 2). (https://www.ebi.ac.uk/ena/browser/view/PRJEB39103).
Total genome length for all eight isolates was 6.44–6.50 Mbp, with a GC content of 67.5%. All eight isolates showed most similarity with reference genome GCF_008432465 (AX1), which corresponds to the type strain of A. xylosoxidans subsp. xylosoxidans (ATCC 27061T, CCUG 12689T, DSMZ 10346T, LMG 1863T, and NCTC 10807T), i.e., between 88.38 and 89.60% on the basis of mapped sequence reads, and between 98.71% and 98.76% on the basis of average nucleotide identity (ANI). Indeed, the overall similarity between the genome sequences of the eight isolates was high, i.e., 99.60%, as assessed by digital DNA hybridization, and more than 99.97% according to ANI-analysis. This was confirmed by variant calling where we observed that the isolates differed from each other only for a total of 367 SNPs, whereas a total of 59,452 SNPs were observed between the isolates and the best matching reference genome (AX1) (Figure 1). The susceptibility phenotype of each of the eight isolates was assessed by spot-test against the phage cocktail APC 2.1 and expressed as “S” when susceptible or “R” when resistant (e.g., “is2S” means that isolate number 2 was susceptible to the phage cocktail) (Table 2 and Supplementary Methods). Among these eight isolates, analysis based on variant calling furthermore revealed four closely related but clearly delineated strains, i.e., clones that differ genetically from other clones, with different phage susceptibility phenotype (Table 2 and Figure 1): Strain 1 (Str1), contained isolates 1 and 3 (is1S and is3R), found in BAL#3 (is1S-Str1/BAL#3) and BAL#5 (is3R-Str1/BAL#5), respectively. Strain 2 (Str2) contained isolate 2 (is2S) from BAL#5 (is2S-Str2/BAL#5). Strain 3 (Str3) contained isolates 5, 6, and 9 (is5S, is6S and is9S), which were found in BAL#6 (is5S-Str3/BAL#6, is6S-Str3/BAL#6) and BAL#9 (is9S-Str3/BAL#9). Strain 4 contained isolates 7 and 8 (is7R and is8R), found in BAL#9 (is7R-Str4/BAL#9 and is8R-Str4/BAL#9) (Table 2).
Isolate is1S-Str1/BAL#3 was obtained on 25 July 2017, i.e., 45 days before the first phage therapy session (8 September 2017) and was 100% identical to is3R-Str1/BAL#5 isolated seven days (15 September 2017) after the first phage therapy session (Figure 1). Since both isolates is1S-Str1/BAL#3 and is3R-Str1/BAL#5 are 100% identical, this means that the phage resistance mechanism of isolate is3R-Str1/BAL#5 is not genetically supported (see discussion). Isolates is5S-Str3/BAL#6 and is6S-Str3/BAL#6, both phage susceptible, were obtained one month later (12 October 2017) and belonged to still another strain (Strain 3). Finally, on 8 February 2018, i.e., 16 days after the second phage therapy session (23 January 2018), an additional three isolates were obtained from BAL#9. Of these, isolate is9S-Str3/BAL#9 belonged to the same Strain 3 as isolates is5S-Str3/BAL#6 and is6S-Str3/BAL#6 and was phage susceptible as well, but isolates 7R and 8R belonged to still another strain (Strain 4) and were both resistant to the phage cocktail. Interestingly, the phage resistant Strain 4 isolates (is7R-Str4/BAL#9 and is8R-Str4/BAL#9) contained mutations compared to the other six isolates that could explain the phage resistance observed for these two isolates (Figure 1): when Strain 1 was used as a reference, a C to A transition at position 1803 of the colicin I receptor gene caused a Tyr601->Stop transition. This receptor has been recognized as a phage receptor [7].
We further studied the course of infection by extracting DNA from the three available A. xylosoxidans-positive BAL samples (BAL#5, #6 and #9), and by quantifying DNA of the different strains by means of strain-specific qPCRs (Table 3 and Supplementary Methods) that had been developed on the basis of the obtained WGS data. qPCRs for Strain 2 and Strain 4 were only positive for the BALs from which these isolates had been cultured, respectively, BAL#5 and BAL#9. qPCR for Strain 1 was only positive for BAL#9, but not for BAL#5 from which isolate 3R had been cultured. qPCR for Strain 3 was positive for all three BALs, although no isolate belonging to Strain 3 was cultured from BAL#5.

The study did not require ethical approval.

The sequencing reads and genome sequences of all isolates have been submitted to the European Nucleotide Archive (ENA) and are available under project number PRJEB39103 (Table 2). (https://www.ebi.ac.uk/ena/browser/view/PRJEB39103).

The authors would like to thank L. Lécuyer and V. Boussaud (Unité de Transplantation, HEGP), B. Sabatier, V. Savoldelli, T. Caruba and P. Prognon (Pharmacie HEGP), P. Odou, C. Nassar, C. Berneron and M. Roche (Pharmacie Lille), and E. Deberranger (Hématologie Pédiatrique Lille), for their help in the management of the patient. Microbiological analysis was performed with a funding by the Association Robert Debré pour la Recherche Médicale. The authors would also like to thank Caroline Semaille and Nathalie Morgensztejn from the Agence Nationale de Sécurité du Médicament (ANSM) for their regulatory support. 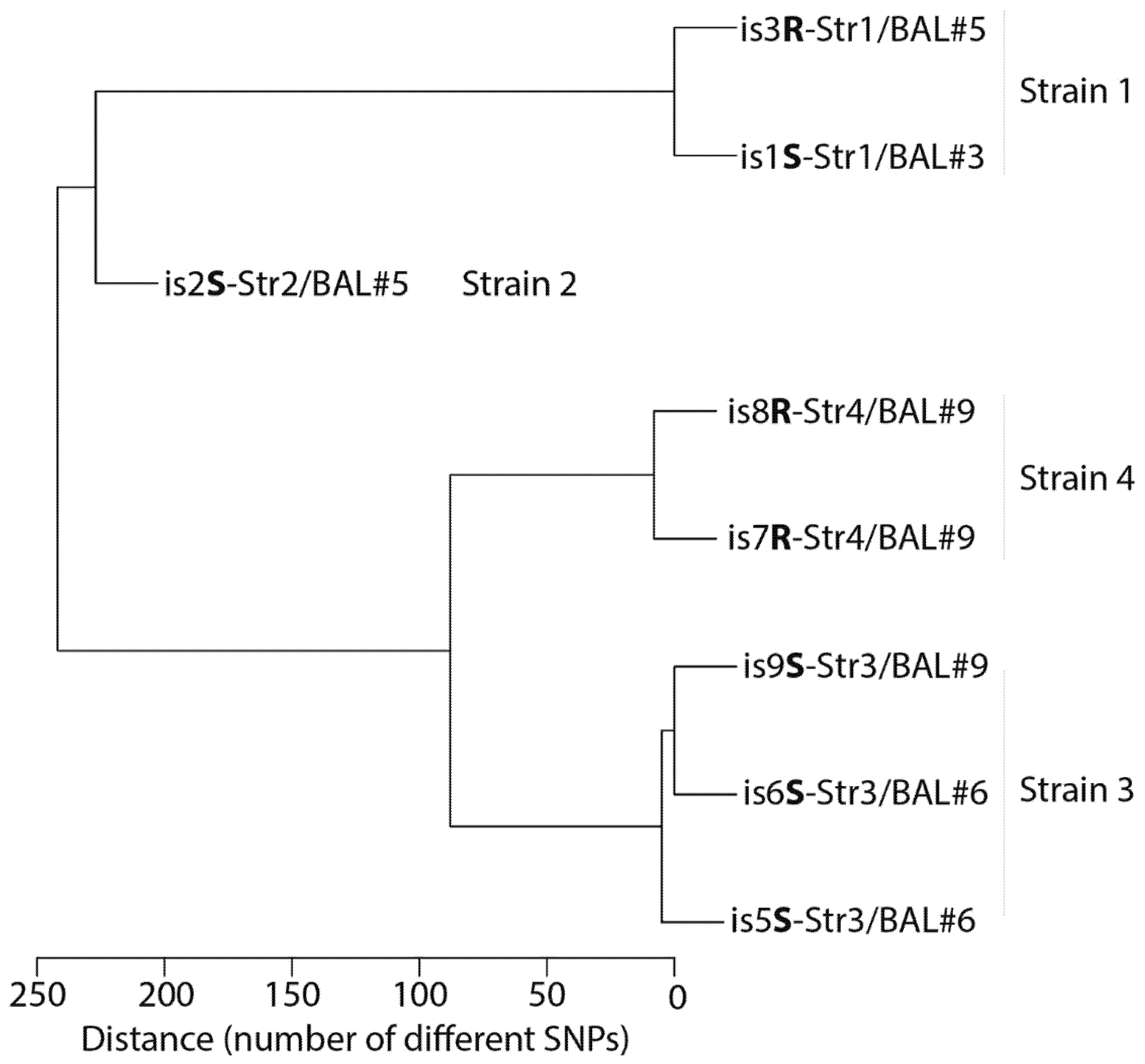